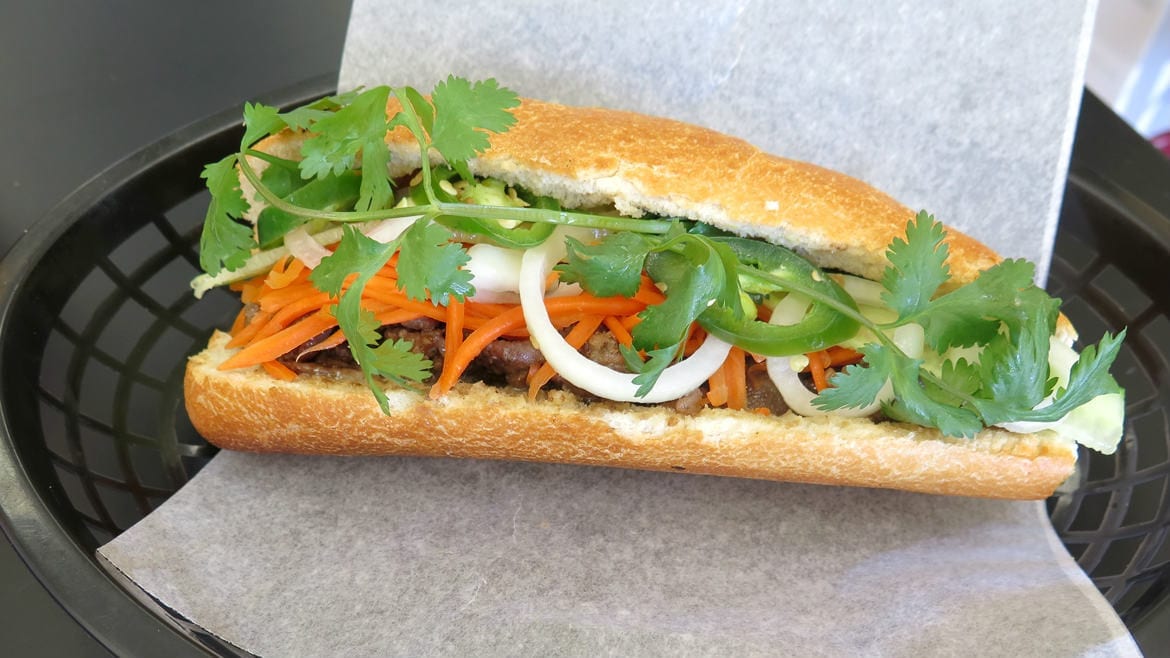 Jimmy Phan, general manager of Bun Mee Phan (4244 N Oak Trafficway), brings over a basket loaded with a bánh tiêu and a chai waii, along with a pair of scissors. With a grin, he cuts the round bánh tiêu in half and offers a piece. It doesn’t take much encouragement to bite into this mildly sweet, puffy, and hollow Vietnamese donut topped with sesame seeds. Airy and light with a soft chewy texture, this donut is nothing like the sugary concoctions served with glaze or stuffed with jelly at American donut shops around Kansas City. The other donut, chai waii, resembles a long john without the filling. Less sweet with a subtle yeast flavor and flaky texture, chai waii is a bready treat eaten as a snack any time of day, or traditionally dipped in sriracha or rice porridge. Bun Mee Phan is a Vietnamese sandwich shop rather than a bakery, but it’s a mistake not to try these donuts at least once.

Kaylee Nguyen, the shop’s owner, arrives with Kenzie, the nearly one-year-old daughter of Ngyuen and Phan. Fed by her parents, Kenzie nibbles on tiny pieces of bánh tiêu with a robust appetite. The couple opened Bun Mee Phan in early March in a modest retail strip mall next to Lawson Bank just north of North Kansas City. Both Phan and Nguyen have worked in restaurants previously owned by family members. For their first business, they wanted a small shop that was easy to manage.

“We wanted our own space where there’s not many Asian restaurants,” Phan said. “We didn’t want to compete with anyone.”

“We both have restaurant experience and a network,” Nguyen added. “We combined our ideas for this shop.” 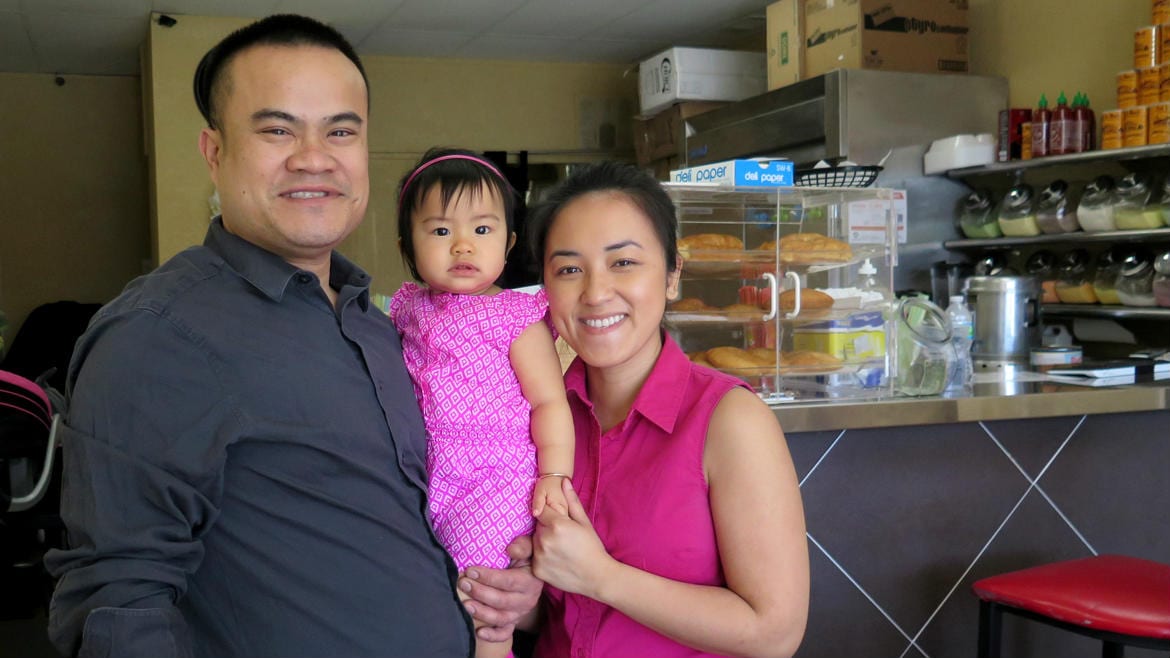 A number of Vietnamese restaurants and Asian markets are scattered in the River Market and Columbus Park. None offer the variety or quality of bánh mì quite like Bun Mee Phan. For the popular Vietnamese sandwiches, the shop uses baguettes made by Le Monde Bakery in North Kansas City. The bakery makes a custom version of the baguettes. Knife scores across the top of the bread are made diagonally instead of straight before baking. Phan and Nguyen requested this change so that the baguette’s crust would still be chewy but less hard and sharp when taking a bite.

The selection of bánh mì includes a choice of lựa chọn or meat. The special is a traditional assortment of pork cold cuts and steamed pork. Individual meats such as steamed pork, grilled pork, lemongrass chicken, grilled beef, and caramelized pork belly can also be ordered. Each bánh mì is also topped with cilantro, carrot, jalapeno slices, and cucumber. These sandwich ingredients may also be prepared as a rice bowl, noodle bowl (not a soup), or taco.

The grilled pork is both savory and sweet with tender meat. Phan prepared an alternate version of the pork belly bánh mì. He sliced a bánh tiêu donut in half like pita bread and stuffed the ingredients inside. The soft, sweet bread soaked up the sauce from the pork so not a drop was wasted. 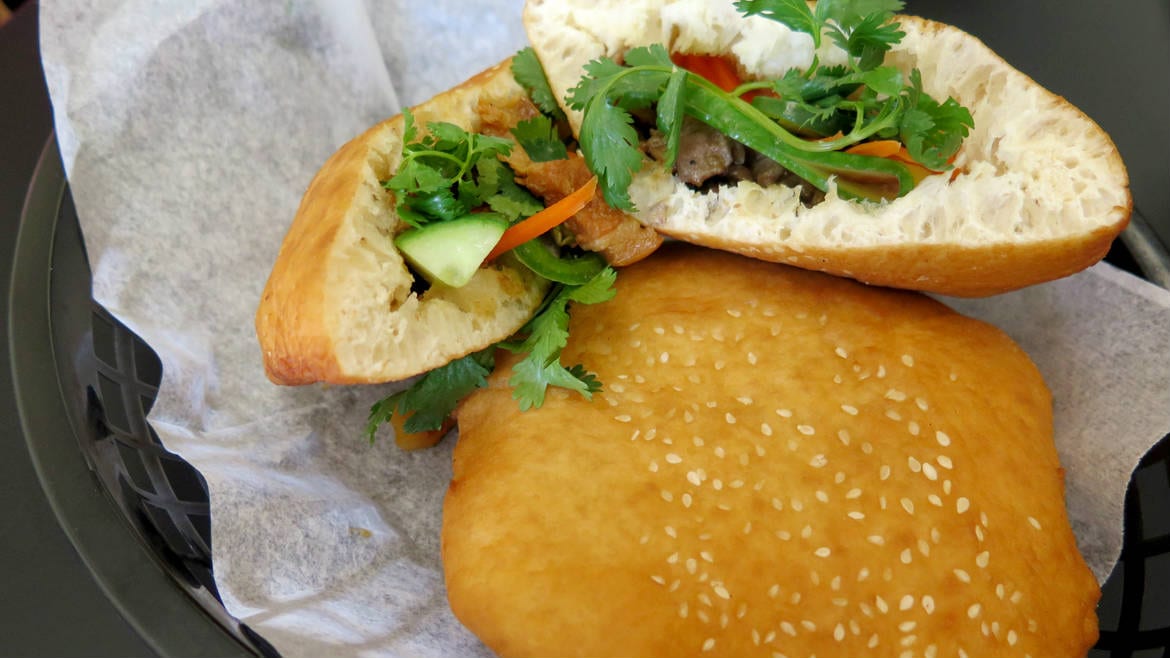 Other menu items to try are the deep-fried quail, spring rolls, and pandan waffle. Powdered pandan, a green leaf used in many Asian desserts, is added to waffle batter to produce a mildly sweet snack with a natural green color. Nguyen prepares this treat regularly for her children. In coming weeks, look for a selection of chè, a Vietnamese word for sweet desserts and beverages.

“Ours will have coconut juice, tapioca, jelly, and fruit,” Phan said.