Talking about race at a KC barbershop 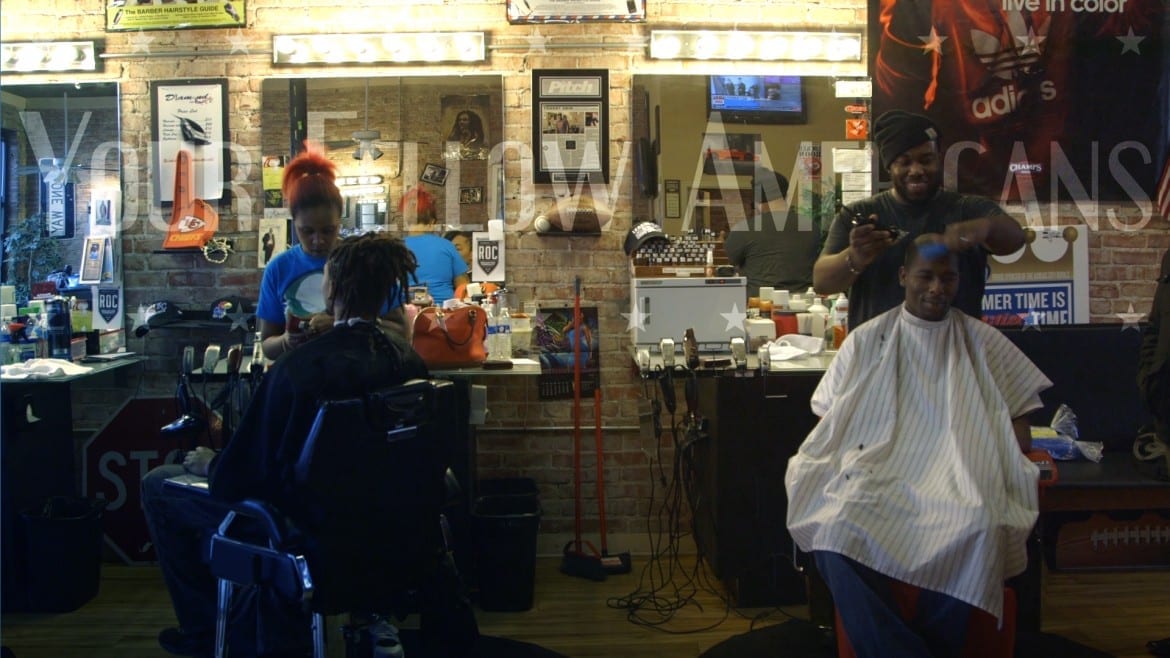 It’s just these dividing lines that our team on Your Fellow Americans aims to explore. Work on the Your Fellow Americans project kicked off back in the summer of 2013, and it was during that time that we began to shape the ideas and concepts for the project with some initial, informal interviews about race, immigration and the American Dream.

So, on July 31st, I grabbed my camera and walked into Diamond Cuts, a barbershop located at 34th and Troost in Kansas City, MO. And the conversation shown in these videos is the result of that visit.

In our documentary “We Are Superman: The Transformation of 31st and Troost,” Kevin Bryce (director) and I (producer) examined Troost – its history, the division that it represents and the hopes for its future. As a part of the documentary, we interviewed Craig Carlock, who used to own and operated Barbershop 67 where Diamond Cuts now stands. Craig was forced to close Barbershop 67 in November of 2011, several months after the fatal shooting of one of his barbers. At that time, we spoke with him about his desires to see more businesses on Troost in order to provide more opportunity and vision for the local community, and how that balances with the issues of crime and violence within the urban core. While devastated by the death of his friend and saddened to be forced to close the barbershop because of a drop in business, Craig remains adamant about the importance of local investment and his desire to, one day, open another business on Troost.

At YFA, we thought it was time for a follow-up visit. Within the African-American community, barbershops are a gathering place: a space for community to interact and conversations to spark.

And, of course, it’s simply a place to get your hair cut. While I haven’t experienced a haircut at Diamond Cuts, I have experienced the complementary currency barbershops trade in — the welcoming atmosphere and great conversation. When I walked into Diamond Cuts and introduced myself to Phil Diamond, the owner of the new barbershop who reopened the space in mid-2012, he gave me a handshake and a smile (and if it was a curious smile, I can’t blame him).

Phil and several others paused what they were doing, sat down at their back patio, and gave me almost an hour of their day to share their thoughts on race, immigration and the American Dream. In these conversations, we learned that Phil has the same desires to see the urban neighborhoods rebuild themselves and that he is working to build that sense of community, starting with the people he interacts with through Diamond Cuts. If you stop by some day, you can see it for yourself.

This week’s conversations lay out some of the toughest issues in today’s society and reveal a desire to see change for the better. If this makes the conversation occasionally intense, that’s because this group considers the neighborhoods around Troost, and east of Troost, as their neighborhoods. And if it’s considered a little bold, or silly, for me – a white guy – to walk in Diamond Cuts and ask probing questions, what does that mean for the thousands of adults and children who call Troost home? What does it mean for your fellow Americans? Have a look at these conversations, and let us know.