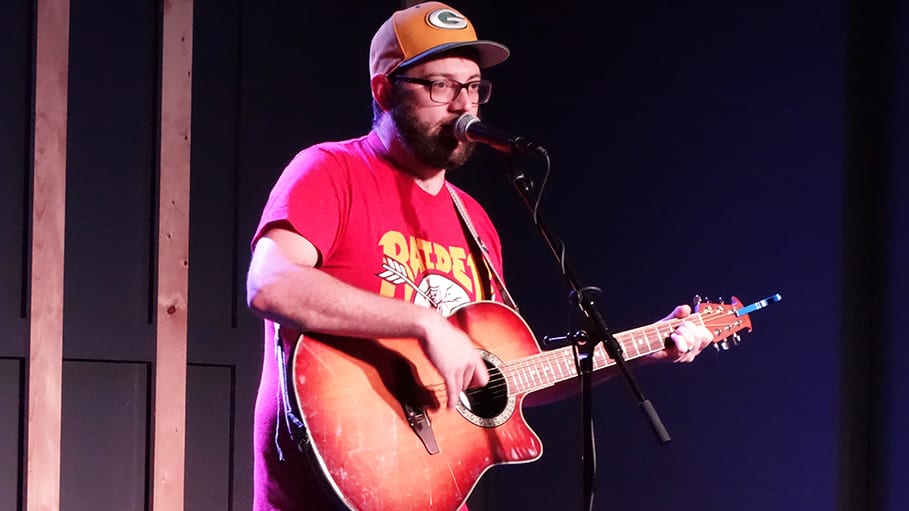 Ben Wendt performs at The Rino's SongLab on Monday night. Wendt emcees the weekly event, which helps artists live-test newly written songs before investing too much time on them. (Dan Calderon | Flatland)
Share this story

It was a tensely muted scene at The Rino on Monday night, especially considering the small crowd. Almost all of the room’s high-top tables were occupied by parties of one – many of whom sat quietly with a fidgety, nervous energy. Assorted instruments, packed away tightly behind soft, zippered bags and road cases, lined the back of the room.

Through the darkness, the silhouette of Ben Wendt, production manager for The Rino, pinballed from table to table, talking to the audience and writing down names on his notepad. His list would serve as a makeshift bill for the evening’s “SongLab.”

The weekly event at The Rino is a different take on the traditional open mic night, aimed at helping songwriters stage-test new material in front of a live audience. And it has become a valuable tool for emerging artists and seasoned pros alike.

The audience on Monday included a table or two of non-musicians, but the majority of the crowd had either finished performing their two-song set or were waiting to perform. This sort of ratio might seem strange for a concert, but since its inception, SongLab has been aimed squarely at artists. The goal is to provide a safe space for songwriters to congregate, share ideas, and offer critiques.

The concept is the brainchild of Wendt, who also performs in local bands The Way Way Back and Den Mothers.

“With music, you may write a song, and by the time you play it with your band for the first time, you’ve already sunk like 40 hours into it,” Wendt said. “SongLab gives you a space where you can write a song, and before you get too invested in it, you can find out if there is something there or not.”

SongLab has succeeded in providing that outlet for songwriters, but there have also been some unexpected, though welcomed, side effects — the most crucial of which is networking. Many of the performers either attend SongLab as spectators or perform at the event multiple times a month. And that kind of constant contact has nurtured collaboration. Wendt knows of at least four bands whose members first met at a SongLab.

In addition, the community of artists has developed close ties. Wendt frequently attends shows of SongLab regulars, and typically sees other SongLab performers who have purchased tickets to the shows as well. 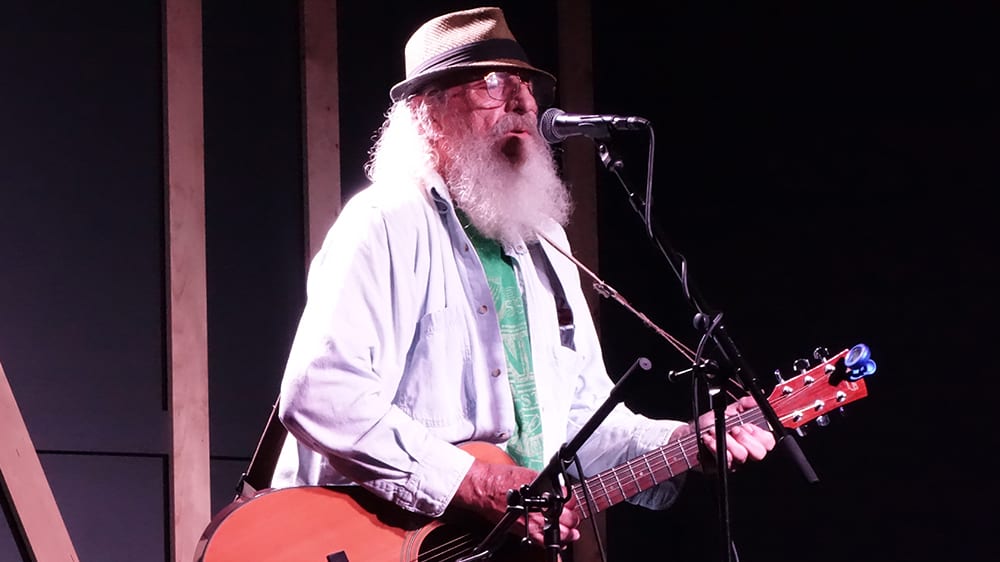 With the reach of social media, he said, it’s easy to think you know everyone in town. That is, of course, not the case in a metropolitan area of our size. Wendt has met a lot of people through SongLab.

“It may sound kind of cliché,” he said, “but I think it’s a lot like church for a lot of people.”

Monday’s performers agreed. Matt Roth, who performs as Major Matt Mason USA, said he comes to the open mics to hone his craft. Roth said the performances can sometimes be depressing and inspiring, and both can be helpful as an artist.

“When people are good, it makes you want to practice more,” he said. “Or you see someone else perform and you realize you’re just as good as that person or maybe even better. And you get self-confidence from that.”

Allison Gliesman, who performs as sex ed, prefers SongLab to other open mics because it is less exclusive, but still manages to showcase great, cooperative artists.

“It’s nice to see that it doesn’t have to be a battle with one another when we’re all trying to get to the same place,” she said.

That’s encouraging, because even though this city’s music scene has developed a reputation as being supportive and artist friendly, communities like the SongLab are rare. And sure, there’s a chance that it only amounts to a handful of songwriters improving their hobby skill, but with the kind of nurturing environment it can provide, SongLab also has the potential to break the next big act.

— Dan Calderon is Kansas City native, an attorney, and contributor to Flatland. You can reach contact him by emailing pdancalderon@gmail.com, or on Twitter @dansascity.