Exhibit Will Include Survivors Living in Kansas City 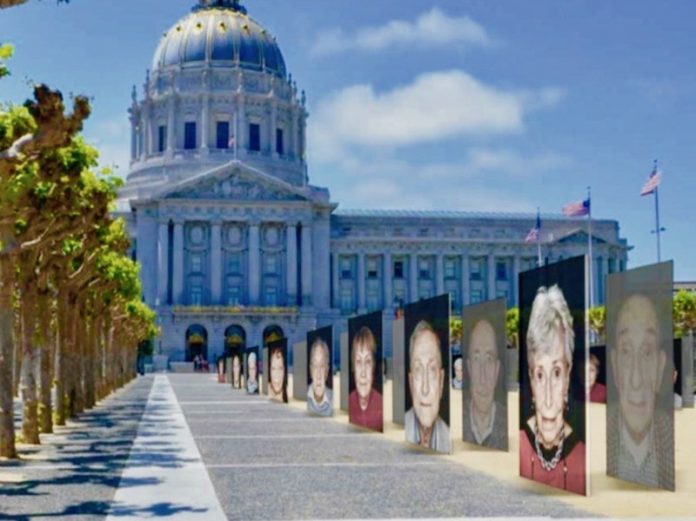 "Lest We Forget" was displayed at the Civic Center Plaza in San Francisco. (Courtesy | Luigi Toscano)
Share this story

“Lest We Forget,” a traveling Holocaust exhibition that opened in Germany in 2015, is arriving at the National World War I Museum and Memorial at a time anti-Semitism is increasing in the U.S. and white nationalists are fanning intolerance.

The outdoor exhibition will feature 70 large portraits of Holocaust survivors, including seven living in Kansas City. It was created by Luigi Toscano, a German-Italian photographer and filmmaker.

Matt Naylor, executive director of the World War I Museum, sees a troubling connection between current events and the years leading up to the outbreak of World War I in 1914.

“Internationally, we see a rise in tribalism, we see changing or shifting alliances, and we see a growing disparity between the most wealthy and everybody else.

“These were contributing factors to World War I. There are ominous parallels. This installation is even more topical and important to the conversations we’re having.”

At its formal opening Friday on the Memorial Courtyard, the local survivors whose portraits are displayed will be among the guests. Toscano will conduct guided tours following the ceremony.

For Naylor, the exhibition has a personal connection. One of the local residents whose portrait is included is Sonia Warshawski.

In 1945, she was imprisoned by the Nazis in the Bergen Belsen concentration camp when it was liberated by a British tank division. Naylor’s father was among the soldiers serving in the unit.

As a teenager, Warshawski and her family had been forced from their Polish village to the Jewish ghetto in 1942 to work as slave laborers. She and her mother were later deported to the Majdanek death camp where her mother died.

Warshawski was then sent to Auschwitz and finally Bergen Belsen. After being liberated, she met her husband John at a displaced persons camp and they immigrated to Kansas City in 1948. Her story became a recent documentary, “Big Sonia.”

“One of the powerful effects of having these local photos is it personalizes the exhibition,” Naylor said.

“The Holocaust was not an abstract event of the past. Sonja and the others live among us. Many of their families and neighbors did not survive.”

“Lest We Forget” has been touring the United States since 2018 and has been in New York, Washington D.C., Boston and San Francisco. After its Kansas City stay, it will go on to Pittsburgh, Chicago, Brussels and Geneva.

The exhibition, which will run through Oct. 6, is coming to Kansas City with the help of Goethe Pop Up Kansas City.

Naylor said the World War I Museum was approached by its organizers to bring it here.

“It was something we were very interested in,” he said.

“The conversation around the Holocaust is never a tired conversation and what better location in Kansas City to host this than this civic place, this place of memory?”

The University of Missouri-Kansas City also is holding two events associated with the “Lest We Forget” exhibition. Details can be found here.