Rooting for the home team is ageless

At the McCrite Plaza ALCS watch party, senior citizens showed they are just as fired up about the Royals as anyone else, ahem, maybe more. (Photo: Daniel Boothe | Flatland) .
Share this story

The Power & Light District, Kansas City’s go-to place for Royals madness, has nothing on the fans at McCrite Plaza. It’s a retirement community on the north side of Kansas City, Missouri.

Decked out in their team gear, McCrite residents piled into the community’s “City Lights Club” Wednesday to watch the Kansas City Royals take on the Toronto Blue Jays at the official McCrite Plaza Royals watch party. The partygoers, many of them Royals fans since the team’s birth in 1969, cheered, cursed, hugged and drank with the same enthusiasm one would expect to find at a local sports bar downtown.

“Once a fan, always a fan,” said Joe Carter, 84, when asked if cheering on the Royals ever gets old. It goes to show that maybe being a fan doesn’t end in retirement. If anything, it may get more intense.

Fans were on the edge of their seats throughout the game, biting their nails, scratching their heads, wringing out their napkins and screaming at the umpire on the TV screen. They displayed the same ‘live and die with every pitch’ type of passion that has defined a generation of Royals fans which has seldom seen the team make it to the playoffs, let alone a potential second consecutive World Series appearance.

It’s all a part of being a life-long Royals fan, something McCrite Plaza executive director Cassidy McCrite understands.

“My great grandmother, she used to call the Royals ‘my boys,’ McCrite said. “It is the same thing with our residents, they are very passionate about their Royals. They are their boys,” he said.

At the party, residents were treated to Blue Hurricanes (a mix of rum, coconut juice and curaçao) over ice by the McCrite Plaza staff. To the bar staff’s disappointment, the cocktail looked more green than blue.

However, that didn’t deter the partygoers from indulging in a second or third round.

“Don’t let their age fool you,” Patrice Pitts, a marketing associate at McCrite Plaza and resident bartender said as she poured a thirsty fan another round. When it comes to having a good time, “these old folks will show you a thing or two,” she said with a laugh.

Here are some favorite Royals memories, from the McCrite Plaza partiers: 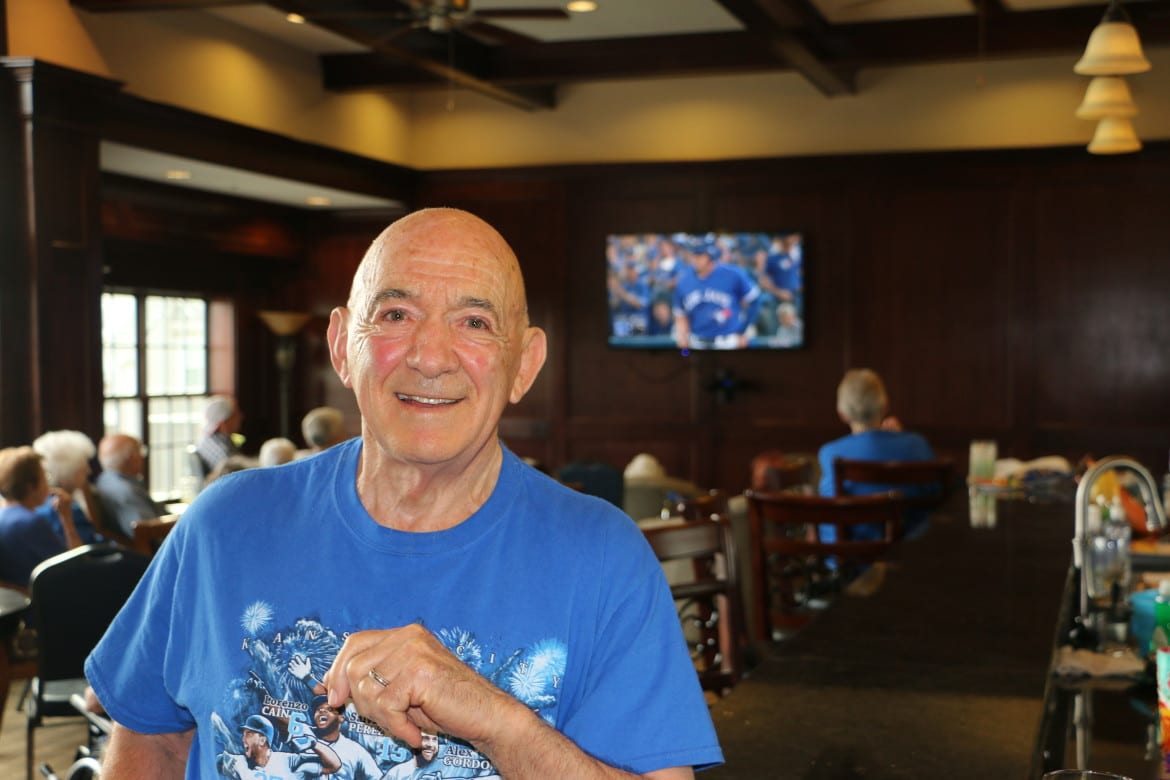 How long have you been a fan? “Since forever, I watched every single game this season. Every single one.”

Favorite memory: “When the Royals won the 1985 series, after it was all over there was the parade that went through downtown. Everybody was there. There was this feeling throughout the city that the Royals had done this great thing in winning the World Series that year. It was bigger than the game. It was a win for the whole city.” 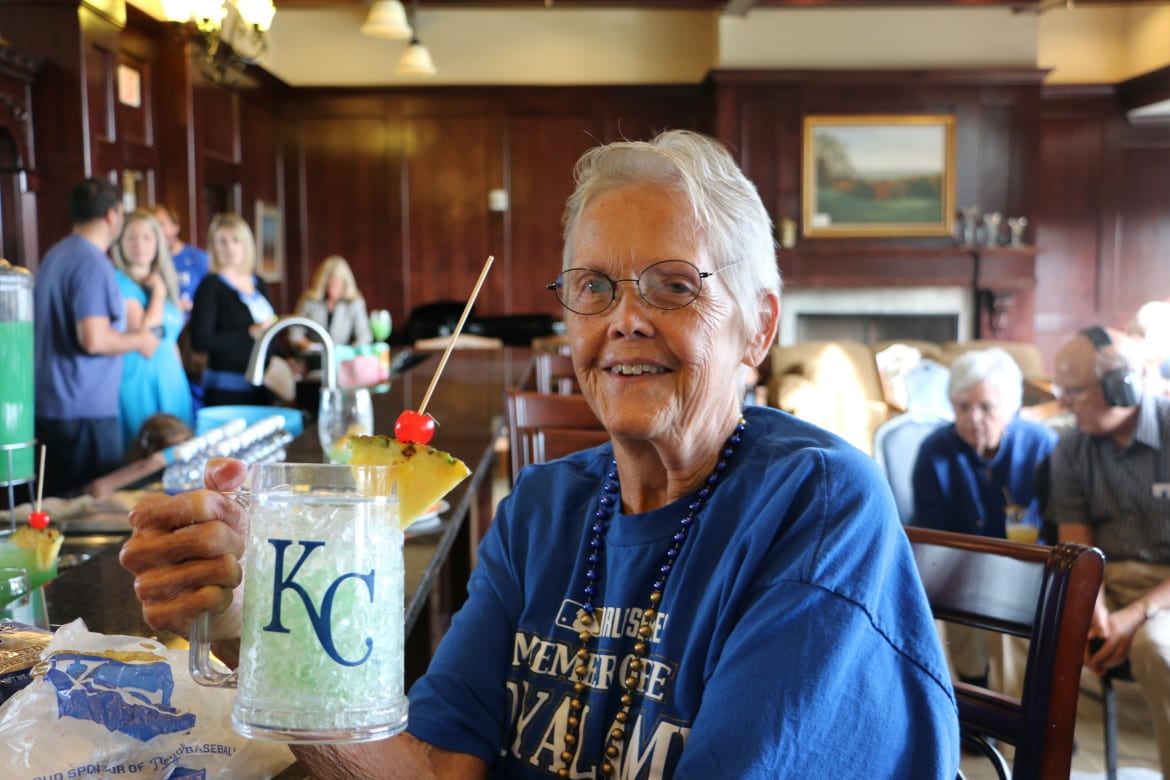 How long have you been a fan? “I grew up rooting for the KC Athletics first.”

Favorite player: “All of them… (laughs) Except Johnny Cueto.”

Favorite memory: “We used to have season tickets, my son and I. Now, this was in the 1978 American League Championship Series against the New York Yankees. And we were both sitting in the area behind home plate, where the families sit. As it turns out, we were sitting right next to Darrell Porter’s brother. Well, shockingly, the Royals won. And when we won the game, everyone just sat there stunned. As if winning were heaven, and we were on our way to the afterlife. We weren’t supposed to win that game, and Darrell Porter’s brother turned to us, and even he was in shock. I’ll never forget it.” 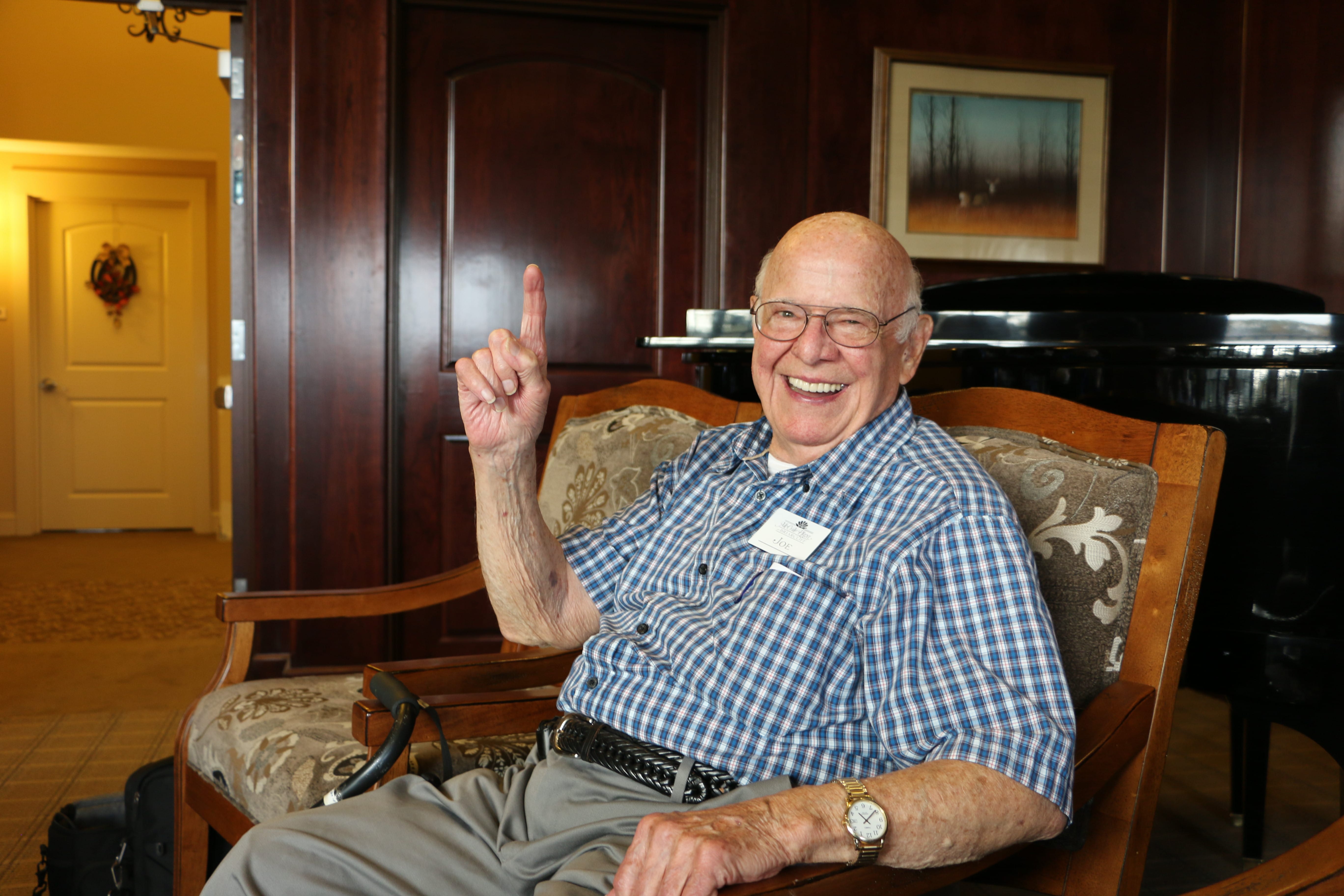 How long have you been a fan? “I’ve been a fan ever since before they were ever at Kauffman Stadium, since they were down at the old stadium and they were the Athletics.”

Favorite memory: “My greatest memories are watching the Kansas City Athletics as a kid, but, watching the Royals win the ‘85 series, and George Brett. I knew him by name. And now, I still love it, and so does my son, he goes to every game. I can’t go anymore because it’s hard to get around now, but I still watch. I still love it. I think we are definitely going to win it this year.” 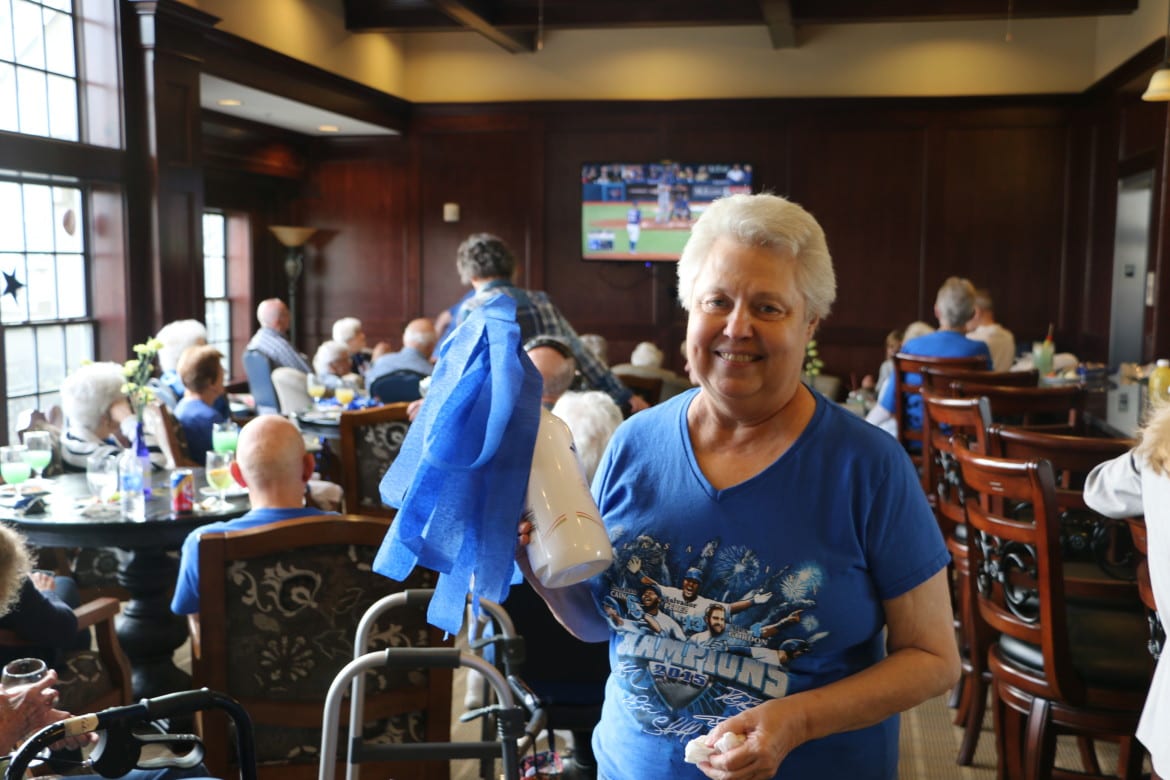 Favorite memory: “30 years ago, I had a girlfriend who was from St. Louis. And we traveled back and forth on I-70 throughout the ’85 series. Now, in game seven of the series after we had just won, I turned to my friend and smiled. She knew she had to buy supper and drinks that night, and it was everything I could have asked for.” 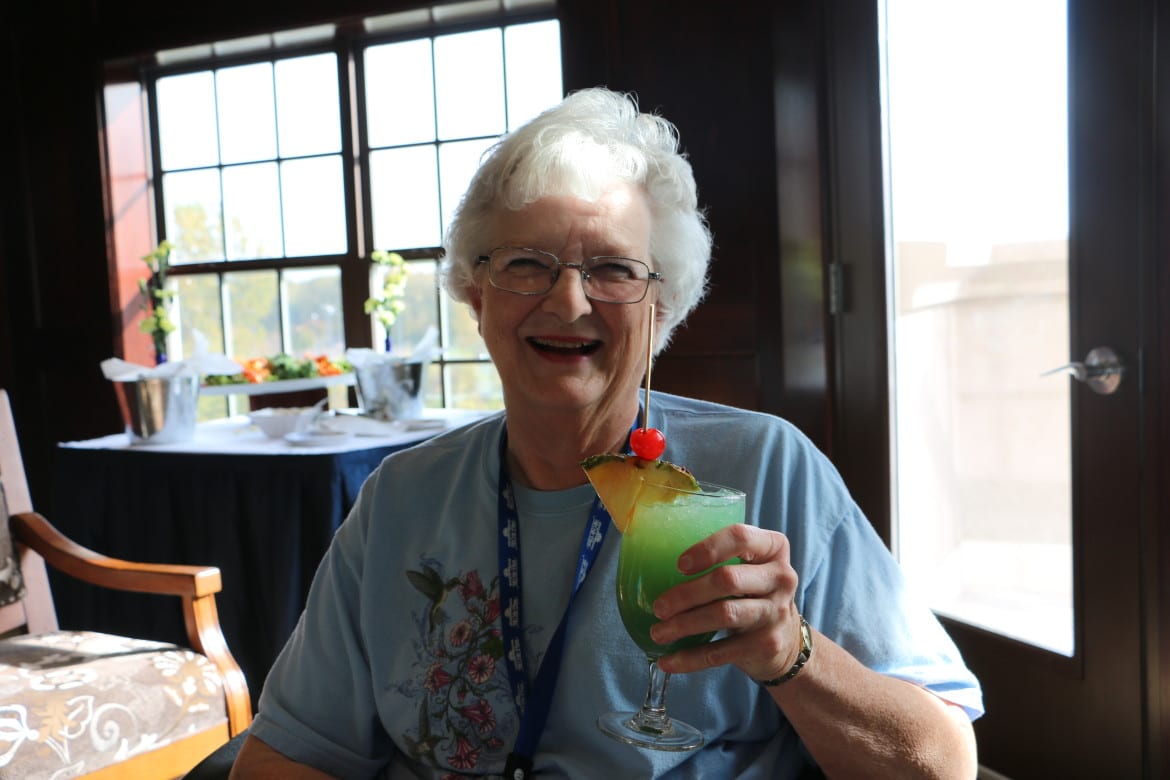 How long have you been a fan? “I was a fan of the Athletics before the Royals came along, but I have been a fan of Kansas City baseball my whole life.”

Favorite memory: “I was at game six of the 1985 World Series. I remember St. Louis fans were awfully disappointed with the call, but I was so excited. And then the Royals came back to win it the next game. Just wonderful.” 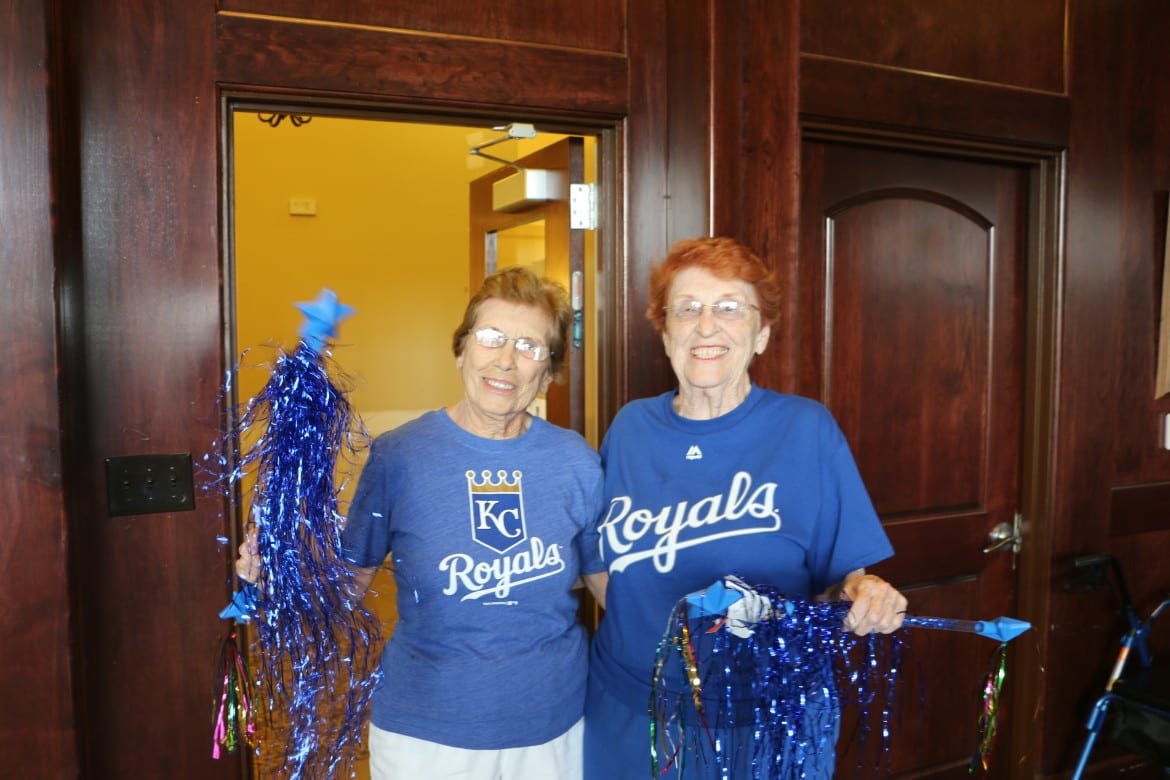 How long have you been a fan? Laura: “Oh, since forever. We were raised by a dad who loved the Cardinals. That was before the Royals existed.”

Carol: “But when we the Royals came to be, boy it was all Royals.”

Laura: “We used to be young sisters, and our mother used to yell at us to come to dinner. We’d always say, ‘Just five more minutes Mom!’ Cause you know, we’d be watching the game.”

Carol: “Of course, that 5 minutes would always turn into 25 minutes.”

Carol: “Remember? We both had sore throats.”

Laura: “We both had sore throats, but it didn’t matter.”

Check out the rest of the party in the slide show below.