When Heidi Van moved to the West Plaza with her two young children, she joined a vanguard of families staying in Kansas City rather than chasing the idea of a better public education in the suburbs.

She welcomed the diversity. As her daughter prepares to enter kindergarten, Van said she’s hardly strapped for high-quality public school choices. “It makes you see where you are in the middle of something that’s bigger than you,” Van said.

Sprawl is hardly new to Kansas City, stretching back to the early 20th century, when the stench from the stockyards transformed Quality Hill from a tony district into a haven for immigrants. Mansions turned into boarding houses as the rich moved south; it was considered a slum. 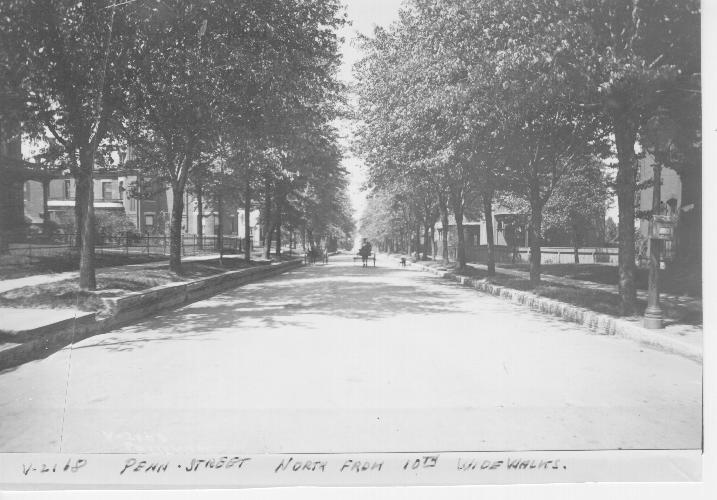 The Quality Hill neighborhood when it was still home to the elite in Kansas City. (Via Missouri Valley Archives)

The school district transformation was more sinister than smell, said Arthur Benson, a former Kansas City school board member and the plaintiff’s attorney in the district’s 26-year desegregation case that ended in 2003.

In one real-estate practice, he said, a broker would buy a house on an all-white block just south of where blacks were moving. He’d then panic the rest of the neighborhood by moving a black family into the house, convincing the neighbors to sell for 50 cents on the dollar, warning that they would not get 25 cents if they waited.

“Pointing to neighborhoods and their elementary schools to the north recently ‘turned black,’” Benson said, “these brokers churned sales for years as entire areas were transformed.”

Between 1958 and 1973, he said, 60,000 whites moved out and were replaced by about 50,000 blacks believing they were moving into integrated neighborhoods. “The neighborhoods were soon all black, as were the schools that served them.”

During the same years, developers were establishing the first ring of suburbs on both sides of the state line.

Developer J.C. Nichols played an unlikely, but nonetheless pivotal role in education by building planned developments like Mission Hills. The insular communities included parks, schools, churches and restrictive covenants on homes. The covenants dictated exactly who could — and could not — move in.

Kansas City schools — once home to the best laboratory equipment, curricula, highest test scores and best paid teachers — dismissed the idea that the suburbs could overtake their realm.

In 1961, the Kansas City schools superintendent met with reporters to find out why they were writing about suburban schools, said University of Kansas Professor of Education John Rury, who has studied Kansas City education extensively.

“You’re going to be hearing a lot about suburban high schools and suburban schools and how much better they are than Kansas City. Don’t believe them,” he told them.

Magnet schools eventually kept some families in Kansas City, but the damage was done. Kansas City has spent decades since working to rebuild.

Yet academic progress is happening.

Lincoln College Preparatory Academy is regularly ranked the best high school in the state, Benson said. He could spend all day shouting it from the rooftops, but it might not matter.

“I think a lot of it is based on the inertia of these past misconceptions,” he said.

Changing demographics are hardly limited to the urban core, Rury said, noting that the Shawnee Mission School District is experiencing the same kind of perception problem as its northern portion grows more diverse. It sends families packing for Blue Valley.

Shawnee Mission will likely not see the wholesale migration suffered by urban districts, Rury said, but it could very well end up with a geographic divide highlighted by divisions between its high schools.

“North versus east is the classic example,” he said.

And just to the north of Shawnee Mission is the Kansas City, Kansas, school district, which has faced struggles similar to those of Kansas City Public Schools.

The mere mention of an inner-city school evokes images of a principal roaming the halls with a baseball bat, said Chief of Staff David A. Smith. He said he can practically hear people using air quotes when they say the phrase urban core, arguing it is really code for assumptions that it is filled with low-achieving minorities.

“We can do a lot of really, really good things,” Smith said, “but for some people, we’re still an urban district.”

Programs in the KCK schools include allowing every child to take the ACT during the school day, convincing unlikely children to take dual-credit college courses in high school and offering full-day kindergarten and preschool programs so children don’t start behind. 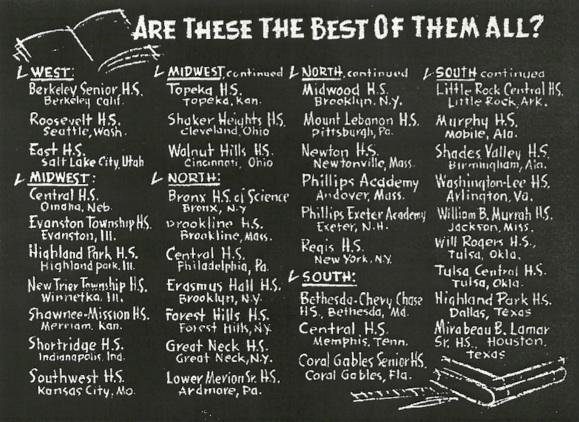 Some of the best schools in the country by region in the year 1957. (Via Newsweek)

“We may not be able to change to the broader societal perceptions of what it means to be an urban district,” Smith said. “Because the antecedents of those perceptions are so long-standing and so widespread that there is only so much one district can do.”

One case in point, he said, might be neighborhoods surrounding the University of Kansas Hospital.

The area has long been hailed as an ideal site for high-end residential property catering to doctors, nurses and well-paid medical staff. But development has been slow to come, hampered perhaps by the negative impression of the local school district.

The KCK school district rebuilt nearby Frank Rushton Elementary as a sign that it, too, is invested in the neighborhood’s rebirth.

Gone is the previous drab building ringed by a fence that separated the school from the surrounding neighborhood.

The new school has bike racks out front and artwork of children biking, swinging and blowing bubbles. A new sidewalk and fresh landscaping have changed the exterior view to better reflect the progress that’s also happening inside the school.

“It’s a beautiful school, and it’s going to really help the neighborhood,” Smith said. “It is as nice as any school you’re going to see anywhere.”