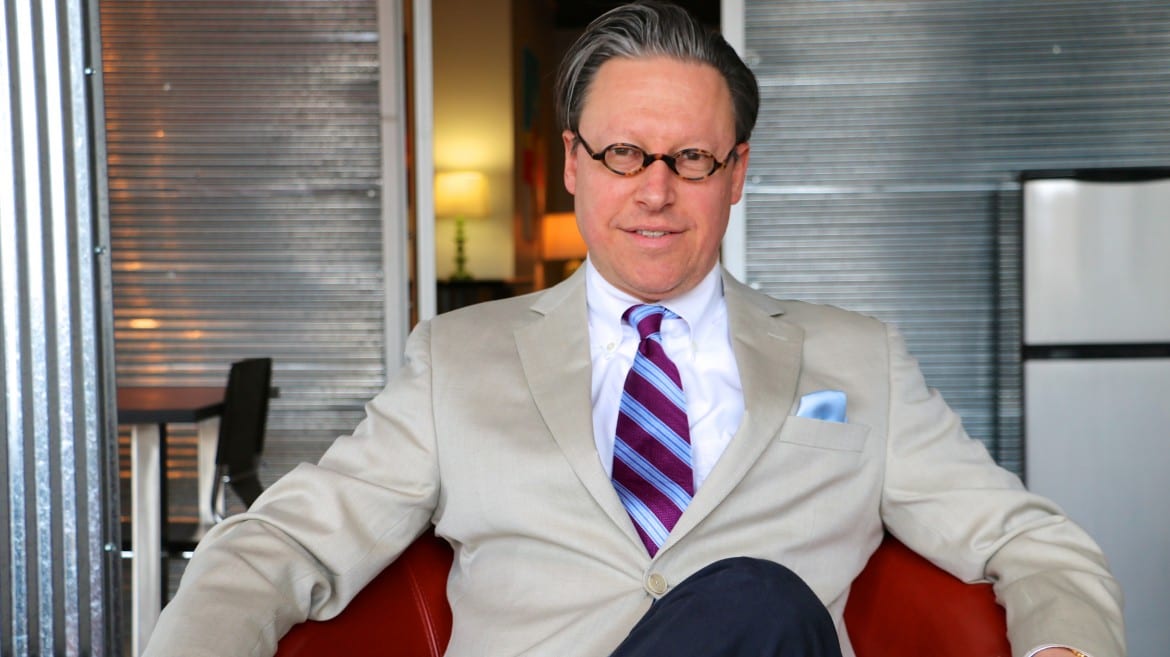 Trae Nunnink, CEO of Boltwell in his Kansas City office.
Share this story

Nestled on the fifth floor of the historic Firestone building in downtown Kansas City is the headquarters of Boltwell, a startup that makes modern emergency preparedness kits. Trae Nunnink is the CEO of the fashionable emergency company, which launched just a month ago.

Nunnink is not the type of individual one might expect to run this type of company. He is not covered in camouflage but rather in a suit and tie, complete with a pocket square. Boltwell is not Nunnink’s only venture, he also runs Access Advertising out of the same office.

Nunnink says that the idea for Boltwell came out of necessity. He has four children now, three at the time, and felt that he needed to prepare for whatever would come his way.

“Going through 2008 and 2009, I started thinking there are really crazy things happening out there,” Nunnink said. “I thought maybe I should look at getting some stuff to have in my basement just in case something crazy happens.”

Nunnink was surprised at the difficulty he had when looking for the survival supplies that he needed. He could not simply buy what he needed from retail stores or mainstream websites. Instead he was relegated to what seemed to be less than reputable online stores.

“I thought I was going to be blacklisted buying off some of these websites,” he said.

Then Nunnink had an idea. He could create a modern emergency preparedness kit with all of the supplies that one would need in an emergency, without all of the camouflage. He wanted to bring a new group of people in to the prepper world and leave the stigma behind.

“I knew there were other people like myself… who have kids and are kind of thinking about this stuff,” Nunnink said. “I’ve had conversations about this kind of stuff with people across the political spectrum, and they said ‘You know, I have thought about getting some stuff to put in my basement in case of something weird happens.’”

He began to allot more time to the idea in December 2012 and placed a focus on design.

“I felt like there was a gap between what existed in the marketplace as far as the prepper brands that were out there and what could be,” Nunnink said. “There was nothing that was speaking to normal people who weren’t comfortable with the extreme. I wanted to develop something that was cool.”

What Nunnink came up with was a system where a consumer can buy the foundation kit, which costs $325, and add-on kits that range from $125 to $220. The basic kit comes with everything from a pocket lantern and stove to food bars and a medical kit.

“The B*72 is our basic kit that supplies the stuff that you would need to survive a 72-hour period of time for two people,” Nunnink said. “We have add-on kits that can assist with things like a power outage or a tornado.”

Nunnink says that developing the product has been difficult because there is no single manufacturer that makes everything that comes in the kits. Nunnink has to work with 78 different manufacturers to fill the kits. Nunnink is confident that the quality of the finished product is second to none in the market.

“It’s going to be a higher price point than anything else that’s on the market because we want to find really high-quality stuff to put in it,” Nunnink said. “A lot of the kits that are out there are just junk.”

Nunnink formally launched Boltwell April 11 and hosted a party at the Kemper Museum of Contemporary Art to celebrate the occasion.

Art to taste and touch (and talk about)