You Asked And We Crunched The Numbers 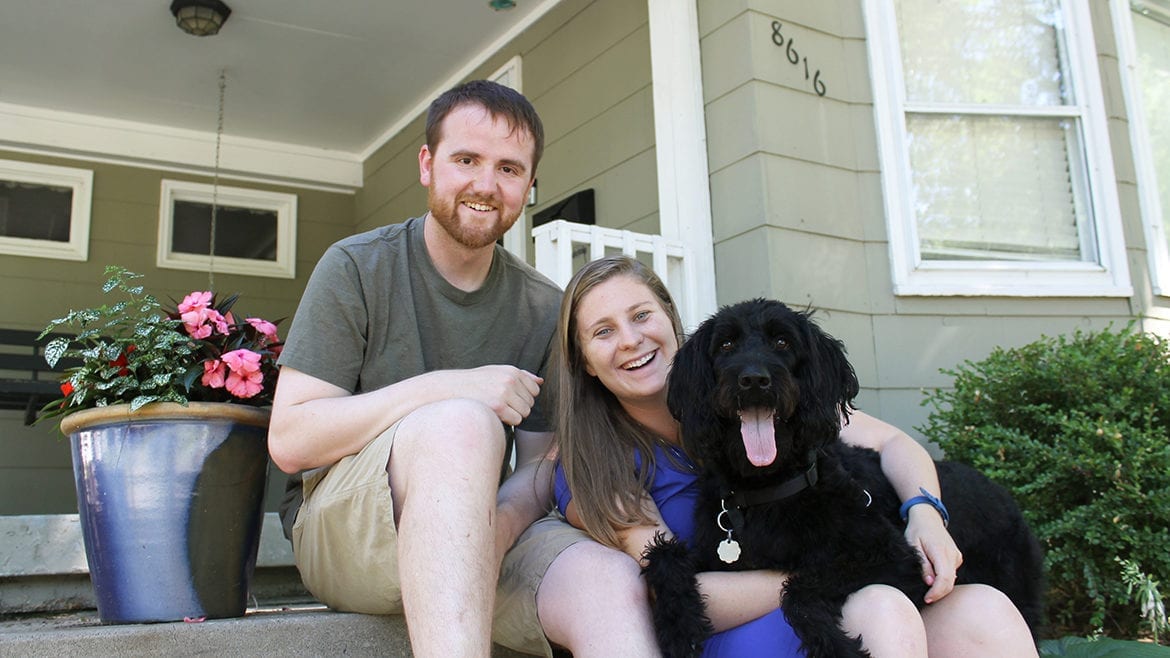 Ben Evans; his fiancee, Claire Burns; and his dog, Nellie, moved to their Waldo home from Overland Park and wondered how many others are moving into the city. (Lindsay Huth | Flatland)
Share this story

Ben Evans is a Kansas City transplant, and after he recently bought a house in Waldo, he started wondering: Are other people moving to Kansas City? And how do experts and forecasters expect the population to change in the coming years?

He posed those questions to curiousKC, and we fired up our spreadsheets to find the answers.

“I’m becoming more invested in Kansas City,” said Evans, an occupational therapist and Rockhurst University graduate. “I look around and hear Denver is growing, California is growing. But what is happening here?”

Evans is originally from Neosho, Missouri, and census data shows the 25-year-old isn’t alone in relocating to the region.

The eight-county area — comprising Johnson, Leavenworth, Miami and Wyandotte counties in Kansas and Cass, Clay, Jackson and Platte counties in Missouri — grew by nearly 120,000 people between 2010 and 2017, according to U.S. Census Bureau data. That’s an increase of more than 6 percent, and continued growth is expected.

Migration is driving a growing proportion of the population boom. In the last seven years, more than 40,000 new residents have relocated to the Kansas City region from elsewhere in the U.S. or abroad. That’s opposed to the “natural” population increase that occurs when births exceed deaths.

The Kansas City area typically draws residents relocating from elsewhere in the region: Missouri, Kansas and the surrounding states, said Frank Lenk, director of research services at the Mid-America Regional Council (MARC). Census Bureau data show that the top areas of origin for people relocating to the metropolitan region are Lawrence, Kansas; St. Louis; and Springfield, Missouri. The Census Bureau defines the metropolitan area as a larger, 14-county region.

Job prospects are one obvious driver of the influx. “If people perceive more economic opportunities in a region, they are more likely to migrate there,” MARC Senior Researcher Jeff Pinkerton wrote in a blog post.

Historically, much of the population growth occurred in the suburbs — and it still does. The counties expecting the largest percent increases in population by 2040 are all suburban, according to MARC estimates: Platte will experience the most growth — an increase of more than 50 percent — followed by Clay and Johnson, at 44 and 43 percent, respectively.

“Going back to 1920 or so, we’d always had a pattern of decline in the center and growth outward,” Lenk said.

But that trend began changing in the mid-2000s, when analysts saw growth downtown for the first time in nearly a century. Now, suburban growth is coupled with a downtown boom — the 10 census tracts in the heart of downtown are expected to add more than 160,000 people between 2010 and 2040. 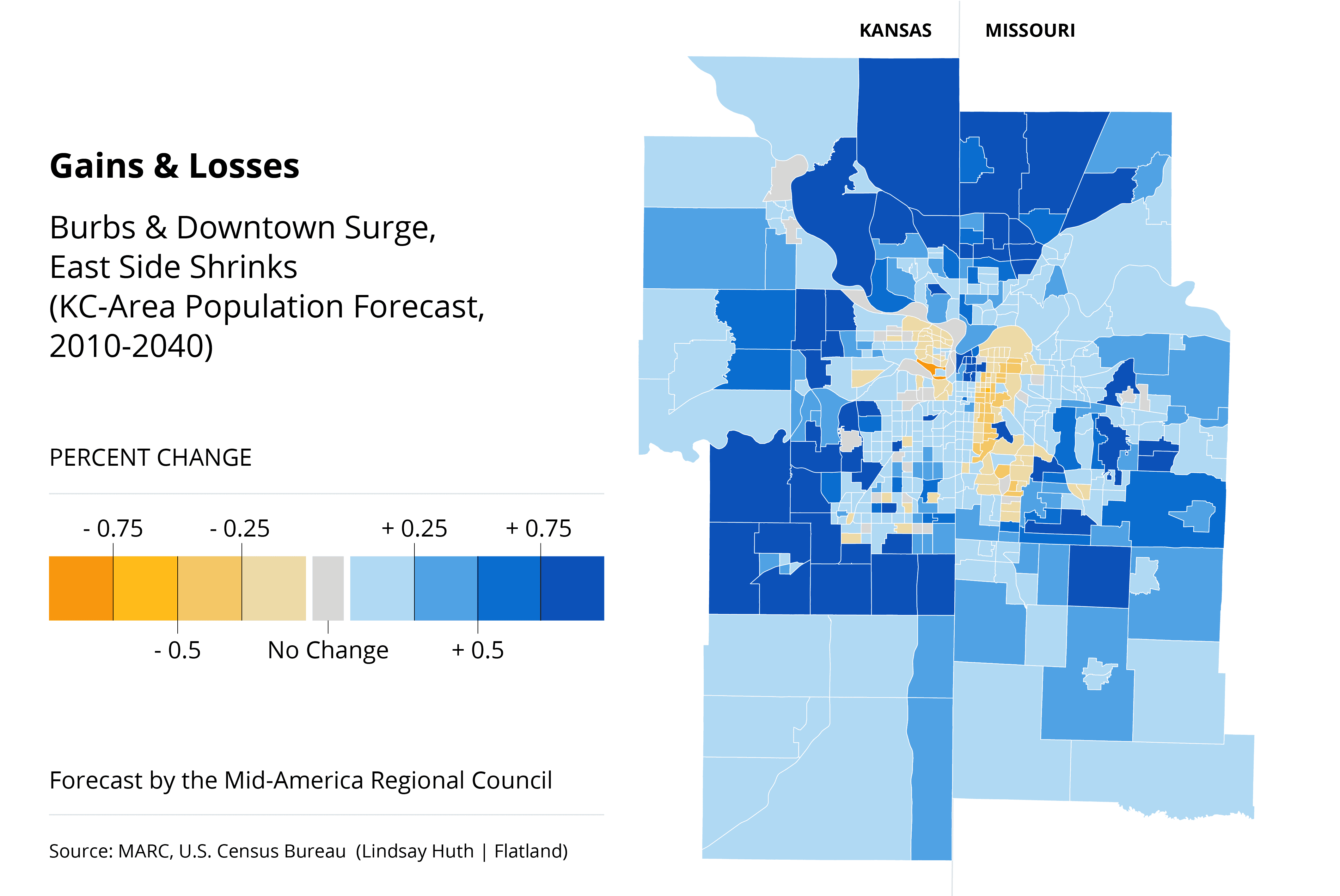 Kansas City was late to the shift from suburban to city living, but downtown is now seeing increased residential development, said Greg Flisram, senior vice president of business and real estate development at the Economic Development Corporation of Kansas City.

Evans wondered about the luxury apartments he sees under construction downtown. “Are they full? Are people renting them?” he asked.

Flisram says they are. “I think we’ve all been a little surprised by how quickly the housing units that have been built have leased up,” he said. “So there seems to be a pent-up demand for urban living.”

Yet the growth in luxury housing has provoked a backlash among affordable housing advocates, who have questioned ongoing city subsidies for high-end development while more moderately priced places are hard to find. This has prompted some action by the Kansas City Council.

Gentrification: The WestsideIn the historic Westside neighborhood, "gentrification" has become a hotly contested word. From long-term residents to real estate developers, a neighborhood meeting shows there's the pull between old and new, and a question of the right way to evolve a…

Where Are Those 20-Somethings Living?Where do young Kansas Citians live? The traditional Midtown haunts? High-end urban apartments? The large rental complexes in suburbia? CuriousKC delved into the topic after receiving this inquiry: “Who ARE all these people who can afford to live in all…

Lenk said that the population shift downtown stems from aging baby boomers downsizing their homes and millennials seeking a different lifestyle than their parents — one that values sustainability and proximity to a tight-knit urban center.

Development has increased along the 2-mile RideKC Streetcar route, which stretches through downtown from Union Station to the River Market, and is expected to continue. In June, voters approved sales and property taxes to fund the extension of the route to the University of Missouri-Kansas City.

The downtown housing demand has, in turn, fueled greater interest from companies — particularly those in high-tech or creative fields — looking to locate where their workforce wants to live, Flisram said. Now, developers are engaged in the first boom of new office development downtown in decades, Lenk said.

Yet much of the urban core is still expected to decline, particularly east of Troost Avenue, the city’s historical racial divide. That shrinkage drives down Jackson County’s overall numbers: Though the urban decline is partially offset by growth in the suburbs, MARC anticipates Jackson will experience the slowest growth of the eight counties.

“I believe over time it [growth] will continue spreading east, but it will take a very long time for it to cover the entire urban core of Kansas City,” said Steve Lebofsky, a development specialist in the Kansas City, Missouri, Census Data/Forecasting Office.