Why We’re Growing The Most Sweet Potatoes Since WWII 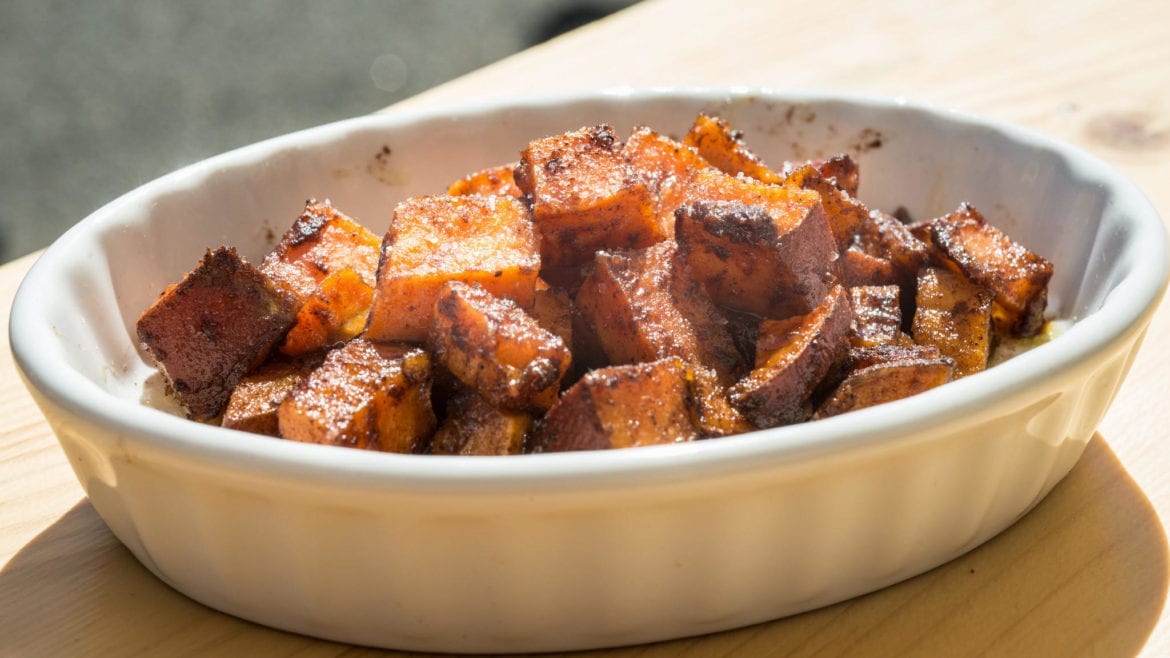 Sweet potato consumption in the U.S. nearly doubled over 15 years, from about 4 pounds per person in 2000. (U.S. Department of Agriculture | Flickr)
Share this story

Sweet potatoes are undergoing a modern renaissance in this country.

While they have always made special appearances on many American tables around the holidays, year-round demand for the root vegetables has grown. In 2015, farmers produced more sweet potatoes than in any year since World War II.

“A lot of things were hard to get during World War II and potatoes were easier to raise than some of the other vegetables,” my grandmother Joyce Heise tells me.

She grew up outside of Philadelphia. Her grandfather farmed potatoes, and their orange sister tuber, sweet potatoes. “And then some things were rationed so you had to do with what the best you could,” she says.

Regular potatoes and sweet potatoes were a staple in American victory gardens and on dining tables. Why? They were cheap and really easy to grow. Back then, we didn’t have sweets like we do now. So sweet potatoes satisfied that sweet tooth at a discount for Americans strapped for sugar and cash.

By the end of the war, U.S. farmers were growing more than 3 billion pounds of sweet potatoes. But when soldiers returned home, people went back to work and the economy hummed.

“It became cheaper to buy russet potatoes than, you know, to grow your own sweet potatoes,” April McGreger says. She grew up on a sweet potato farm in Mississippi and wrote about the history of the root vegetable in her book Sweet Potatoes. 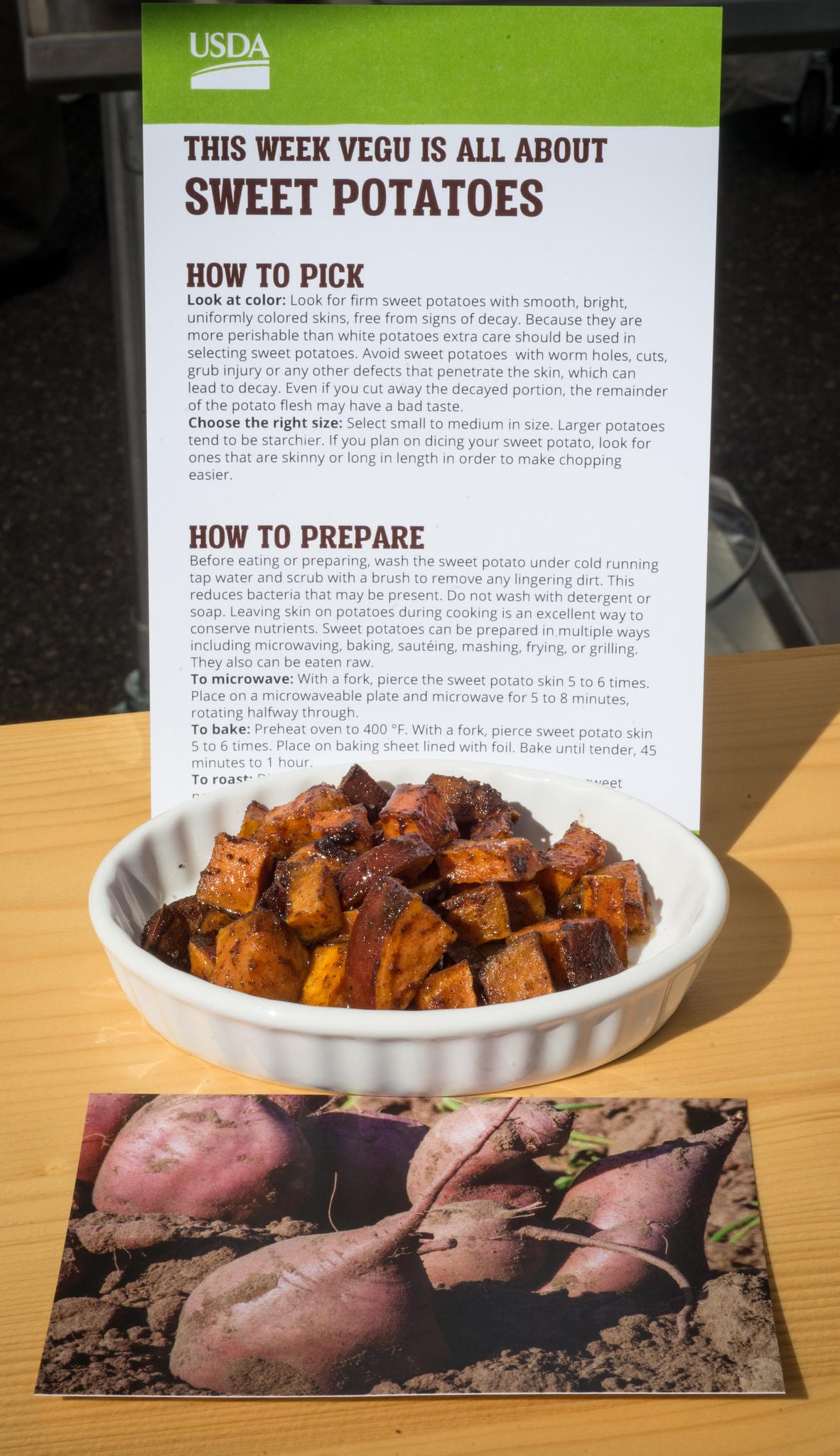 “At around the same time, we really had this sort of movement away from small farming families in the U.S. into working people in more industrialized jobs,” she says. “That means people purchasing more of their food instead of growing it.”

Industrialization of farming and the rise of processed foods left sweet potatoes in the dust. U.S. production dropped by a billion pounds within two years after the war and it bottomed out in 1980, with less than 1 billion pounds total, according to the U.S. Department of Agriculture.

Fast-forward to the 2000s when the sweet potato began its ascension. One big reason: the fad diet. For anyone on the South Beach Diet, Paleo diet, or Atkins diet, the hearty sweet potato was a godsend. Even TV personalities like Dr. Oz highlighted the magic of the vegetable.

“All these diets that have tons and tons of followers are really touting sweet potatoes as being this ‘super food,’” McGreger says.

As Americans were encouraged to cut sugar intake and eat more fiber and antioxidants, the sweet potato – chock full of vitamins — began to show up on plates again. With a long growing tradition and a climate suitable for cultivation, sweet potatoes are local to just about every farmer in the U.S. That makes them ripe for diners that care about eating local. Schools started serving them for breakfast and lunch. Top chefs incorporated them as a quintessential Southern food.

“Sweet potatoes are the darling of this local, farm-to-table eating movement,” McGreger says. “They’re a local ingredient that can be accessed 12 months out of the year.”

In 2000, Americans ate about 4 pounds of sweet potatoes per person. Today, it’s nearly double that, at 7.5 pounds per person.

“Right now, the largest producer of sweet potatoes is North Carolina,” she says. “Those are tobacco farmers that have switched to sweet potatoes because it’s a relatively good cash crop to replace tobacco.”

Outside the country, global demand increased as well.

“In the last 10 years there has been a tremendous increase percentage wise of sweet potato exports,” says David Trinklein, an associate professor of plant sciences at the University of Missouri. “A lot of them going to Europe.”

Trinklein says the majority is going to Northern Europe and Great Britain where it’s too cool to grow sweet potatoes. Today, U.S. sweet potato farmers export about 11 percent of the total supply.

Hungry Europeans, hungry Americans, health-conscious eaters, local foodies. Add up all of these factors, and U.S. farmers produced 3.1 billion pounds of sweet potatoes in 2015. And it may not stop there.

“I think if they can develop new ways to market it, to eat it,” Trinklein says, “there very well could be an increase.”

“Plows, Planes & Peace,” a 1941 newsreel film about the importance of the U.S. agriculture industry to the war effort.