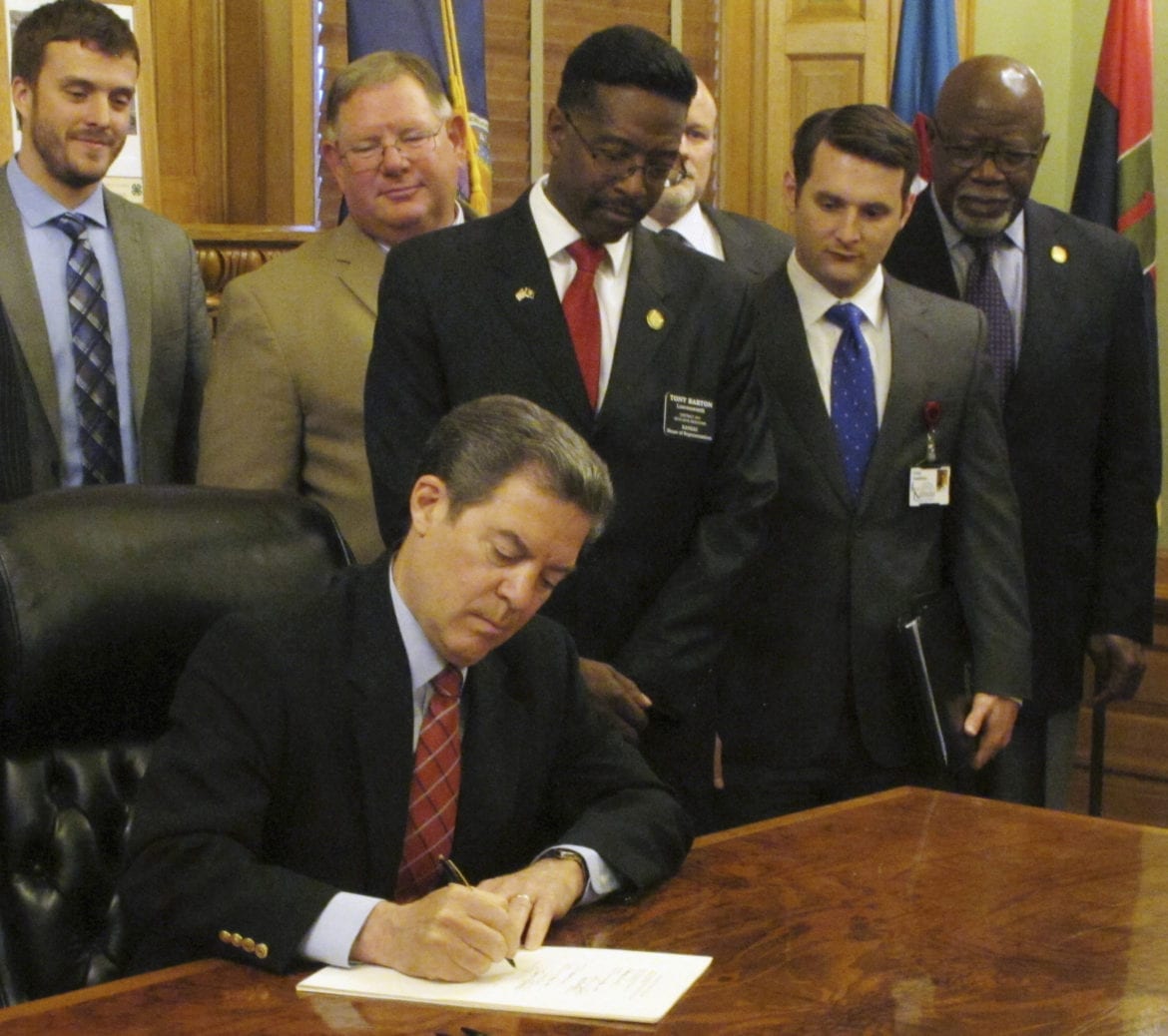 Kansas Gov. Sam Brownback signs legislation tightening the state's lifetime limits on cash assistance and making other changes in welfare policies, Monday, May 16, 2016, at the Statehouse in Topeka, Kan. Brownback says such changes help move people out of poverty and government dependence and into the work force. (John Hanna | AP)
Share this story

Kansas is on track to spend less than a third of what it did six years ago on cash assistance and to serve a third as many low-income people, according to a state budget office memo.

Those numbers have been falling steadily since Gov. Sam Brownback took office in 2011, when Kansas began incorporating work requirements for programs like cash assistance and food stamps in an effort to break what the governor described as “cycles of dependency.”

The work requirements are similar to elements of President Donald Trump’s recently proposed budget, which would tighten eligibility for anti-poverty programs.

Kansas officials say the number of people receiving cash assistance has dropped because of a new emphasis on transitioning them to work, but evidence of their employment is inconclusive and the state’s poverty rate hasn’t fallen as fast as the national average during that period.

The budget memo suggests the downward trend will continue in Kansas. It predicts total spending on cash assistance will fall about 15 percent in fiscal year 2018, to $12.8 million, and another 16 percent in the following fiscal year, to $10.8 million. Both projections are lower than Brownback’s proposed budget anticipated in January.

The estimates come as lawmakers are struggling to fill a projected shortfall of nearly $900 million over the next two budget years while complying with a court order to increase funding for schools. The reductions in cash assistance aren’t likely to make much difference in the overall budget picture, however, because the state general fund only provides a small percentage of the program’s funding: projected at $118,000 in 2018 and $105,000 in 2019.

Freed attributed the reduction to more Kansans getting jobs rather than being dropped from the cash assistance program. She said DCF received reports of 40,000 former cash assistance recipients getting jobs since 2011. However, that number may not account for former recipients who did not report when they got a job or others who may have reported several jobs as they cycled in and out of the program.

“Policy changes in recent years have incentivized employment and self-reliance,” she said in an email. “These effective and widely supported improvements to discourage dependence on government assistance have helped Kansas families.”

Annie McKay, president and CEO of Kansas Action for Children, said she is concerned that parents who are no longer eligible for cash assistance haven’t found family-supporting jobs.

“I don’t see the same corresponding decline in indicators that would corroborate the claims regarding employment — like homelessness data from schools, or free and reduced lunch figures, or Kansans accessing food pantries, or kids living below the poverty line,” she said.

The number of children in families receiving cash assistance has fallen from about 26,000 in 2011 to about 8,500 in the current fiscal year.

Kansas officials have incorporated a combination of administrative and legislative changes to reduce access to cash assistance and encourage people to rejoin the workforce.

In late 2011, the Kansas Department of Social and Rehabilitation Services began suspending cash assistance if parents failed to participate in job training or to name a non-custodial parent so the department could collect child support. SRS was later reorganized as DCF, with some services going to other departments.

Rob Siedlecki, then secretary of SRS, said the department would help parents with child care assistance and other services they needed to resume working. He also likened losing cash assistance to breaking an addiction.

“We want (families) to be successful,” he said in November 2011. “I don’t want them on the welfare rolls. It’s like a narcotic, if they keep on taking the program without trying to help themselves.”

Brownback signed bills passed by the conservative-led Legislature adding restrictions over the next five years. The changes reduced the cash assistance time limit to four years in 2011, and then to three years in 2015 under the HOPE Act.  A follow-up bill in 2016 lowered the lifetime limit to two years.

Tawny Stottlemire, executive director of We Fight Poverty in Topeka, said more people have sought help with rent, utilities and food in recent years. The organization doesn’t track whether clients previously received cash assistance, she said, but the number of people seeking help is higher than it would expect, given the relatively stable economy.

“Over the past three years, we’ve seen steady increases over normal” requests for help, she said.

“We continue to have a steady flow of people seeking rental assistance,” she said.

Meg Wingerter is a reporter for the Kansas News Service, a collaboration of KCUR, Kansas Public Radio and KMUW covering health, education and politics. You can reach her on Twitter @MegWingerter. For more news on health and other topics, go to kcur.org.