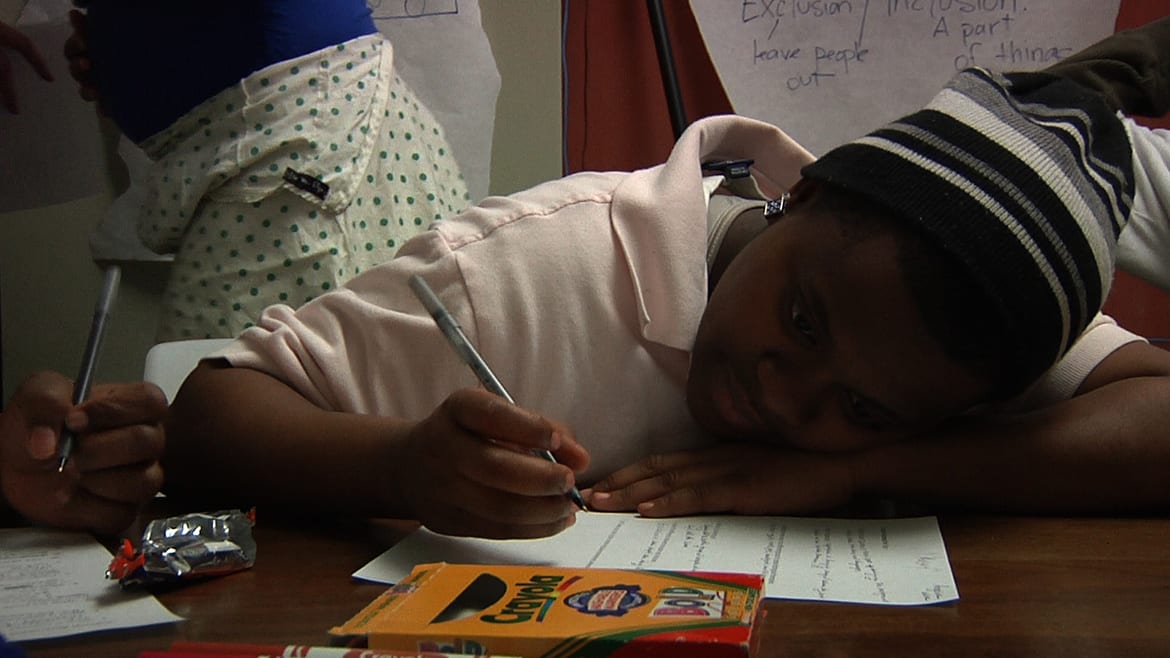 The documentary "The Homestretch," follows three homeless Chicago teens including Kasey, who enters a new transitional home and is re-enrolled in school. (Photo: The Homestretch)
Share this story

All public schools in the U.S. are required by federal law to designate a liaison for homeless students. The McKinney-Vento Act, passed in 1987, spells out what schools are required to provide students in order to minimize barriers to education created by homelessness. Under the act, the definition of “homeless” is rather broad, and can include students that don’t have a stable or regular residence as well as those that must share housing in the event of a loss of regular housing.

The recent documentary “The Homestretch” — which will be shown tomorrow, Saturday March 14, as part of KCPT’s Community Cinema series — illustrates the crucial role schools can play in providing services and resources for homeless students in Chicago.

Describe how your job serves homeless students and their families.

“It varies. This morning I’ve been working with one of the universities for one of our students that has been living in a hotel on the Missouri side. We brought her to a college visit, and we’re just looking at every possible way to make that happen for her financially.

“There’s a wonderful program called Giving the Basics, which provides human dignity items that food stamps don’t cover, like toothpaste, deodorant, shampoo and feminine hygiene products. Once a month, we go to pick up a delivery that we then disperse throughout the Shawnee Mission School District.

“If there are crises going on or we get an intake that has some very primary and basic needs, we have to address those as much as we possibly can. We have a clothing closet and food pantry in the district, but, often times, we have to go outside of the existing resources that we have here.

“There’s also a lot of trauma that kids have experienced. I have one middle school student, both of his parents have been murdered, and he witnessed one of them. We also have some tremendous economic hardship issues, and we just don’t have enough resources for the need that we see.”

As a suburban school district in Johnson County, most people probably don’t think of Shawnee Mission as being an area of need. What does homelessness look like in the district?

“We have approximately 400 students that have been identified in the Shawnee Mission School District (as needing assistance). And one of the things that we struggle with is the image of Johnson County and Shawnee Mission, when probably close to a third of our population is living below the federal poverty line. That comes as a big surprise to people, but the demographics have changed significantly over the years.

“The needs are pretty widespread. In some of our families, there are substance abuse issues to severe economic issues to special needs that impact a student’s ability to learn. Because of the experiences of some of these kids, I would say the common thread is the resiliency that our students and families show. There was one student that was a junior in high school, and I believe had moved 37 times and still managed to maintain fairly decent grades.

“There are less private resources devoted to meeting the needs of those that are struggling here because of some of the image and perception issues.”

In “The Homestretch,” the immigration status of one the students is a major reason he is dealing with homelessness and trapped in a difficult situation. Is this true for undocumented students in your district?

“Yes. There is one individual right now that has been struggling with that. I have another student that I had been working with both her and her family around issues of citizenship and guardianship. They were in a tragic auto accident where she and her four siblings survived but the parents did not. So we had to deal a lot beyond getting them care and have someone act on their educational behalf. And because of their non-legal status we’re having to navigate that as well.”

What sorts of issues cause the teens you work with to be homeless?

“Economic hardship is the main one. I think the challenge is around the minimum wage. For instance, in Johnson County, a person making $7.25 an hour that has a family is maybe making $1,200 a month. The average cost to rent an apartment in Johnson County is about $900, and the cost for childcare is around $1,000, so that math just doesn’t add up. And for people who are living on the edge, it’s a really quick downward spiral.”

What sorts of things would make a difference for the students and families you work with?

“Transportation is not all where I would like to see it in terms of accessibility. Where schools probably struggle the most is around the transportation piece because it gets very complicated and expensive. One of our kids was living with their mom in shelter in Independence because of domestic violence issues. To get this 5-year-old student to her home school at the time would have been a 30–45 minute cab ride. Ultimately she was able to go to a school closer to the shelter, but it’s not uncommon for a school district to either have to share that cost or take it on completely to keep a student at their home school.

“Sustainable housing in another issue, meaning (housing) that’s safe, permanent and affordable. I don’t have a whole lot of housing options.

“I’d also like to see more of a focus on economic literacy and financial resources, because I see so many families that are $10,000–$20,000 behind. And, consequently, it makes things very difficult for them. I am all about promoting self-reliance as much as possible, but sometime there are folks that just need to have assistance.”

This interview has been edited for length and clarity.