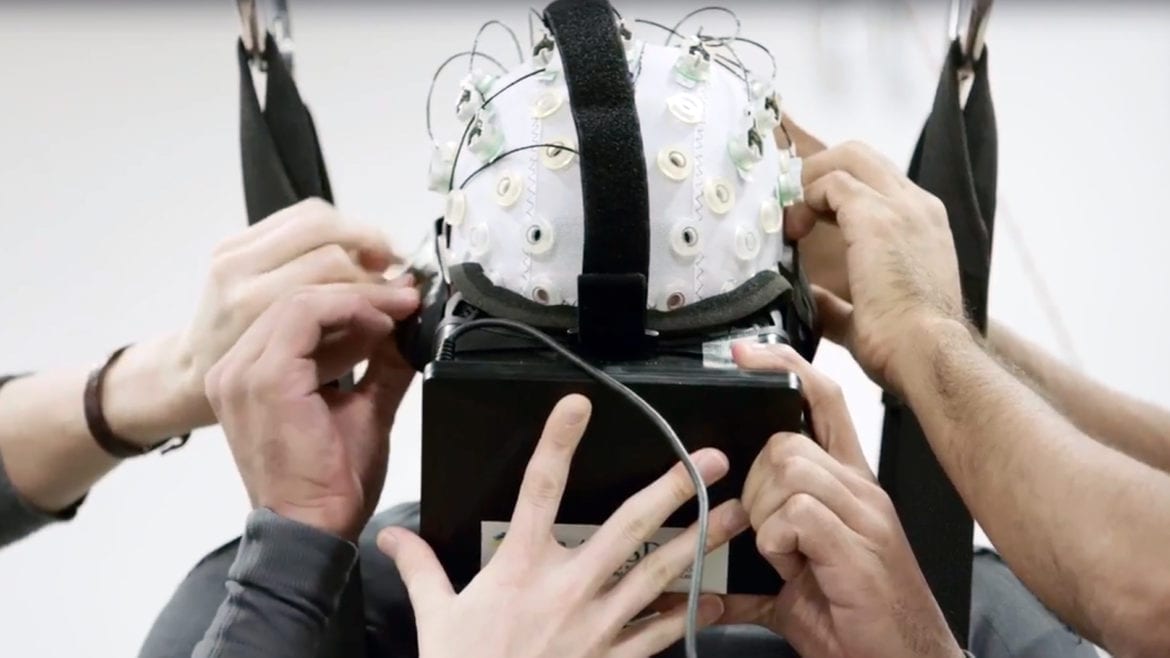 Scientists with the international scientific collaboration known as the "Walk Again Project" use noninvasive brain-machine interfaces in their efforts to reawaken damaged fibers in the spinal cord.
Share this story

Researchers in Brazil who are trying to help people with spine injuries gain mobility have made a surprising discovery: Injured people doing brain training while interacting with robot-like machines were able to regain some sensation and movement.

The findings, published in Scientific Reports (one of the Nature journals), suggest that damaged spinal tissue in some people with paraplegia can be retrained to a certain extent — somewhat the way certain people can regain some brain function following stroke though repetition and practice. In fact, this isn’t a new idea for treating injuries of the spinal cord. Even people with severe injuries can regain some sensation and function through physical therapy if some nerve fibers remain.

The eight paralyzed people in the Brazilian study didn’t regain enough mobility to support their own weight on their legs, but Dr. Miguel Nicolelis, a neuroscientist and physician with Duke University who led the research, says his experimental subjects did make “partial recovery” — improvements that significantly helped their quality of life. They had better control of bowel and bladder functions, he says. Some men were able to have erections and one woman decided to deliver a baby vaginally. “She could feel the baby for the first time,” he says. “She could feel the contractions.”

The study of the first 12 months of training didn’t document the most dramatic quality-of-life improvements that Nicolelis announced in a telephone briefing with reporters. But it did describe some of the improvements in sensation and movement.

Nicolelis previously garnered worldwide publicity for his work by arranging for one of his patients to kick out a ceremonial soccer ball during the World Cup tournament in Rio de Janeiro in 2014. The build-up for that moment was more dramatic than the actual event. But it did highlight Nicolelis’ ambitious efforts to help people with paralysis improve their mobility through robotics, through an international scientific collaboration known as the Walk Again Project.

Other research groups are pursuing similar strategies, and there are several products on the market that help people with spinal cord injuries to walk.

In his work, Nicolelis and his team trained people with paraplegia to visualize moving their muscles, by having them wear virtual reality goggles and giving them tactile feedback on their arms. The idea was to create brain signals that could be picked up by electrodes and used to control the bulky robotic apparatus. Nicolelis was surprised to see that, as people improved their ability to visualize limb movements, they were also regaining some feeling and movement as well.

His patients had been paralyzed for three to 13 years.

“For the first time in many years they were able to voluntarily control their muscles,” he says. “They could move their legs or contract muscles under voluntary control.” Some people had their level of paralysis upgraded to a less severe rating of “incomplete paraplegia.”

“This has not been seen before,” he says. “I call this an important milestone.”

But Edelle Field-Fote, director of spinal cord injury research at the Shepherd Center at Emory University, wasn’t so rhapsodic. “I would not say it’s unprecedented,” she tells Shots. “I’d say the intervention [used in Brazil] is unprecedented.”

Nicolelis’ therapy involves not just the virtual-reality training; it includes physical therapy and extensive stimulation as the robotic machines move their muscles. “If you gave anybody [with some remaining spinal cord] 12 months of therapy, you’d see improvement,” Field-Fote says, even years after an injury.

She notes that at the outset of the study, all the participants had some ability to walk — with assistance from crutches, walkers, braces and in some cases human attendants.

“If you exercise with the body-weight support and treadmill training, you also get improvements,” says Monica Perez, a scientist at the Miami Project to Cure Paralysis who studies mechanisms involved in the control of human movement.

“The question is whether this is superior to previous approaches and which are the mechanisms,” Perez says. “This was a long period of training, so it’s hard to compare.”

The findings from Brazil raise the possibility that more prolonged efforts to restore some movement in paralyzed people could pay off.

“Overall, the study is plausible and interesting,” says Dr. Lyn Jakeman, a neuroscientist who oversees extramural research on spinal cord injury for the National Institute of Neurological Disorders and Stroke. But she also notes that the participants had so many different interventions, it’s not entirely clear whether the visualization exercises or some other combination of factors was responsible for the reported effects. And the study had no control group for comparison.

These independent experts couldn’t evaluate the claims Nicolelis made in his press call but didn’t include in his published report.

Nicolelis tells reporters that two women in his study who had been paralyzed for more than a decade showed the most improvement. They “can generate leg movements, move their legs out and in and flex their knees,” he says. Some of that is captured in a video he released with the published study.

“They are continuously improving,” he says, beyond what he reports in his peer-reviewed paper. One woman now has enough mobility to get out and about, Nicolelis said. “Now she can sit [and] she can basically drive.”

Nicolelis says it’s possible that people with even weak muscles in their legs can more easily control the robotic machinery that he and his collaborators are developing. He suspects that residual nerve fibers through the spinal injury are able to carry sensations up to the brain, along with some rudimentary commands from the brain down to the muscles.

Other researchers internationally are pursuing several different approaches to treating spinal injuries. Those include drugs to limit the damage caused by an injury, along with various approaches to cell transplantation, as well as electrical stimulation and efforts to retrain the central nervous system.

There are roughly 25 million people worldwide with severe spinal injuries. Nicolelis acknowledges that his experiments have been expensive. But if the virtual reality training is indeed key to the improvements he has documented, that could be the basis of less expensive therapy, he believes. Given the success he has seen with his first eight volunteers, he says, he’s planning to expand his research to a new study group.