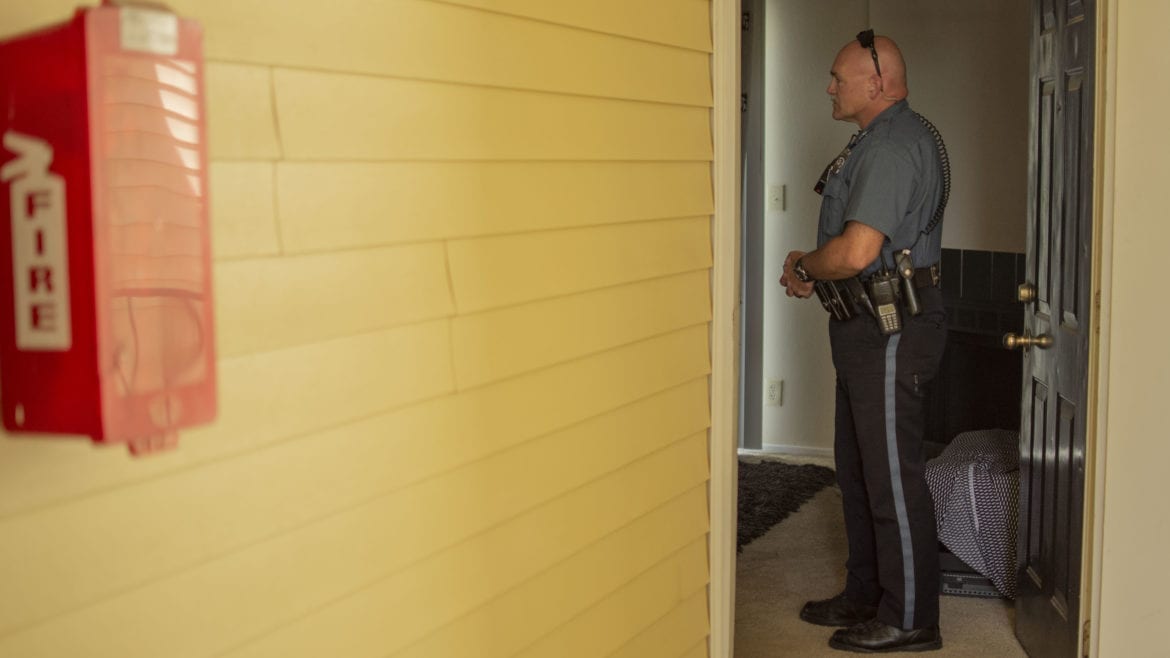 KCPD Officer Michael Bowen responds to a disturbance call. Bowen, who says officers see things on a daily basis that most people don’t see throughout their lives, has found ways to deal with his own stress levels, and also trains other officers in dealing with theirs. (Meg Vatterott | Flatland)
Share this story

Clinical psychotherapist Pat Hinkle was a police officer for 30 years before starting his counseling practice to help other officers work through stress and trauma. During his time as an officer, Hinkle recognized that there was a disconnect between police departments’ understanding of mental health and counselors’ understanding of officers’ experience of stress.

“I had a frustration that the administration and my peers couldn’t recognize a valid reason that someone would need counseling,” Hinkle said. “And even when they did, we couldn’t find a culturally competent counselor.”

Perhaps realizing the disconnect, one of our readers used our curiousKC initiative, which invites the public to tell us what they’re interested in, to ask: “Is it possible for police officers to have two years on and two years off to release tension?”

We couldn’t get in touch with the question asker but took that question to the Kansas City Police Department.

KCPD Sgt. Sean Hess said that sort of rotation is not practical. He describes this on-the-street then off-the-street rotation like “putting on doors today to putting on engines tomorrow.” The “off-the-street” jobs, such as detective work and technical positions, require speciality training and extensive experience.

“What would they do for the two years off? They would be a detective, but then they have to be trained for that,” Hess said. “Everything that’s not in the field is a speciality. It’s a process; you can’t just pick someone out and tell them they are now going to be a detective.”

Of KCPD’s 1,400 officers, around 900 are in the field as patrol officers. It isn’t a 50/50 split between patrol jobs and office jobs; therefore Hess explained that this sort of rotation would be a logistical nightmare. Additionally, officers often enjoy patrolling a particular area and develop a rapport with that community.

Hess understands the thought process behind the question. He said KCPD is recognizing more and more how to help officers deal with stress and secondary trauma, or the the indirect exposure to someone else’s firsthand trauma. KCPD programs like Crisis Intervention Training and the Employee Assistance Program are educational and support resources for officers. However, Hess explained that the stigma around asking for help or needing counseling is still a barrier.

Pete Edlund was a homicide detective on the scene of the Hyatt Regency hotel skywalk collapse in 1981. He compared the awful sight to being back in combat — Edlund spent two years in Vietnam. After the skywalk collapse, he and his partner had to process the bodies from the collapse. Edlund said that, at the time, KCPD gave the officers no psychological support to deal with the trauma of the event.

“The word came down from the command staff at the police department that basically if you made a mental health complaint or had issues, you would be fired. You are just supposed to suck it up and move on,” Edlund said.

Edlund said access to support and counseling after the collapse would have helped a lot of officers. Instead, to cope with the trauma they experienced, he and his fellow officers would have “choir practice,” or a get-together for beers after work to tell stories.

Edlund, who retired from KCPD in 1998, said that the department has improved its approach over time, citing the same Employee Assistance Program and Crisis Intervention Team programs as Hess. More importantly, he thinks the command staff and supervisors are now able to recognize when officers are having a tough time.

“Just because you are police, doesn’t mean you are bulletproof. And that [mindset] has changed dramatically since the time I was a young detective,” Edlund said.

Kansas City Police Department officer Michael Bowen teaches a stress management course to officers. He says that officers see things on a daily basis that the average person doesn’t see throughout their life. One minute, an officer might be helping someone save their cat; the next he or she could be delivering a death notification.

A personal trauma motivated Bowen to explore the other support options KCPD offered. When he lost a close friend to suicide two years ago, he knew he needed to talk to someone about it. He decided to take advantage of counseling through KCPD’s Employee Assistance Program. Bowen feels that there is still an expectation among officers to push through the tough experiences and bury the emotions, but he encourages his peers to find a coping strategy that works for them. For him, he coaches youth sports to release tension.

“A lot of [officers] don’t deal with the stress, and then it pops,” Bowen said. “With the class that I teach, I try to teach them to talk with someone. If you need time alone, take that time.” 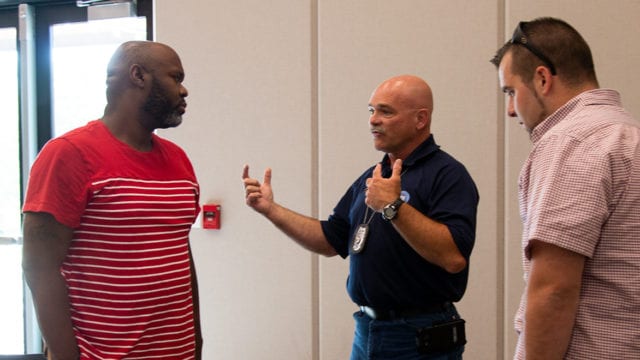 A 2010 study found that urban officers were exposed to approximately 168 traumatic events throughout their career. Additionally, a 2008 study found that 32 percent of officers displayed symptoms of post-traumatic stress disorder.

Hinkle, the clinical psychotherapist and former officer, said the daily roller coaster of stress impacts officers’ health, affecting the brain’s response. The amygdala, a part of the brain that activates the nervous system, becomes over-aroused.

“Your body is not prepared to have a constant flow of adrenaline. The only way to naturally reset the adrenaline and norepinephrine is recuperative sleep, but you never get that if your amygdala is hyperactive,” Hinkle said.

For officers, secondary trauma comes from different sources. Even today, Hinkle becomes emotional describing how officers sometimes have to repeatedly look at disturbing evidence to understand a case. In his final year as an officer, for example, he worked on 48 child sexual abuse cases.

Hess, the Crisis Intervention Training supervisor for KCPD, described the culmination of witnessing traumatic events like “death by a thousand paper cuts.”

The goal of CIT is to give law enforcement officers a better understanding of how to work with people with mental illnesses. Hess said the program has had the interesting side effect of making officers more aware of their own mental health challenges.

Currently, about 40 percent of KCPD’s officers are CIT trained, Hess said, and the 40-hour course is voluntary. Starting next year, officers who are not CIT trained will be required to take a shorter mental health training course.

Hess sees a lot of promise in a peer-to-peer counseling program that was passed in Missouri legislation on June 1. In it, officers would be paired with a peer for confidential counseling and support after traumatic incidents.

“Maybe you don’t want to talk to a social worker or a doctor in that clinical setting, but you will talk to your buddy,” Hess said. “As long as you talk to somebody and have some plan, we have all figured that that’s better than not talking to anybody.”

So while Hess doesn’t see a two year on/off rotation as practical for KCPD, there are multiple approaches for stress management and addressing secondary trauma.

— Meg Vatterott is a graduate student at the University of Missouri studying journalism with an emphasis in visual editing. Follow Flatland @FlatlandKC.