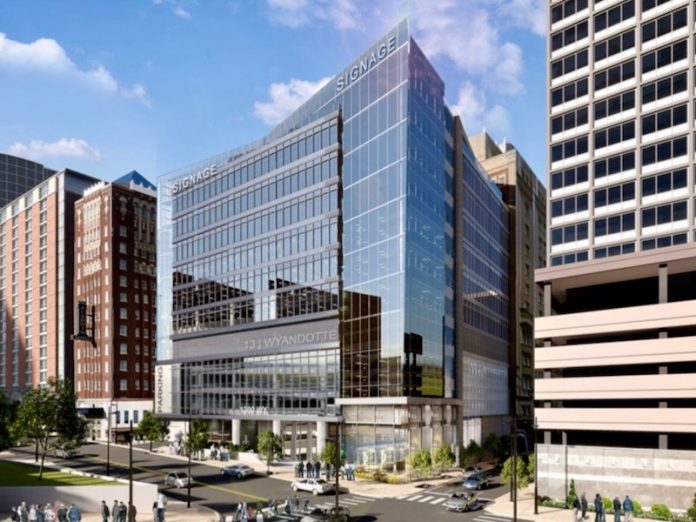 Platform Ventures plans to break ground next year on a 14-story office project at 13th and Wyandotte. (Rendering by Hoefer Wysocki)
Share this story

Platform Ventures plans to begin work early next year on a 14-story office project at 13th and Wyandotte that’s more than doubled in size since it was proposed 16 months ago.

The office tower is now planned to be 152,000 square feet and would be built above a 409-space, six-level garage. The original plan introduced in May 2018 called for 70,000 square feet of office.

Brian Douglas, senior vice president at Platform Ventures, said the scope of the project has been increased in response to the pent-up demand for premium office space downtown located in a completely new building.

“There’s a huge bonus to be the first move on getting a new downtown office project going,” he said. “There’s a lot of people on the sidelines wondering if it would be us or Strata.”

The Strata office project proposed for 14th and Baltimore in the Power & Light District is currently on hold before the Kansas City Council.

Members are concerned about the city financial backing the developers are seeking for their 250,000 square-foot office project and have asked them to come back with a better deal.

“We don’t see the Strata project as a rival,” Douglas said. “There’s more than enough demand to snap up.”

He said Platform Ventures’ office project already has “genuine interest” from tenants for more than half of its space. It’s planned for the northeast corner of 13th and Wyandotte, directly across from Barney Allis Plaza.

Douglas said Platform Ventures expects to complete acquisition of a vacant parking garage on the development site by the end of this month with demolition beginning early next year. The firm already owns a vacant lot at the corner.

The office building is expected to be ready for tenants by late 2021.

The $70 million office project is part of a larger redevelopment plan the firm is pursuing for the block that includes converting the historic Kansas City Club into a 144-room boutique hotel and renovating part of the historic Muehlbach Hotel into 190 apartments.

The hotel project is underway and is expected to be completed by mid 2020. No timetable has been set for the Muehlbach project, which is considered phase three of the redevelopment plan.

The Land Clearance for Redevelopment Authority approved a 25-year property tax abatement – 75% for 10 years, 37.5% for 15 years – last December. The city also will provide an annual subsidy for the garage.

Part of the project’s garage will be underground. The remaining garage levels coupled with the office floors would make it a 14-story structure, Douglas said.

The developer believes having the first new office project to be built downtown since the 1201 Walnut office tower was completed in 1991 will be well received in the marketplace.

“People are waiting for the first shovel to hit the ground,” he said.

The Platform Ventures office project, along with Strata and the planned renovation of the former AT&T building into premium office space, comes at a time the Downtown Council has identified office development as a primary goal to attract more companies to downtown.

“We’re moving as fast as we can to be the first,” Douglas said. “There’s been no Class A office built in downtown in 30 years.”

The architect is Hoefer Wysocki. The contractor will be McCownGordon.