Low-wage workers and the child-care conundrum 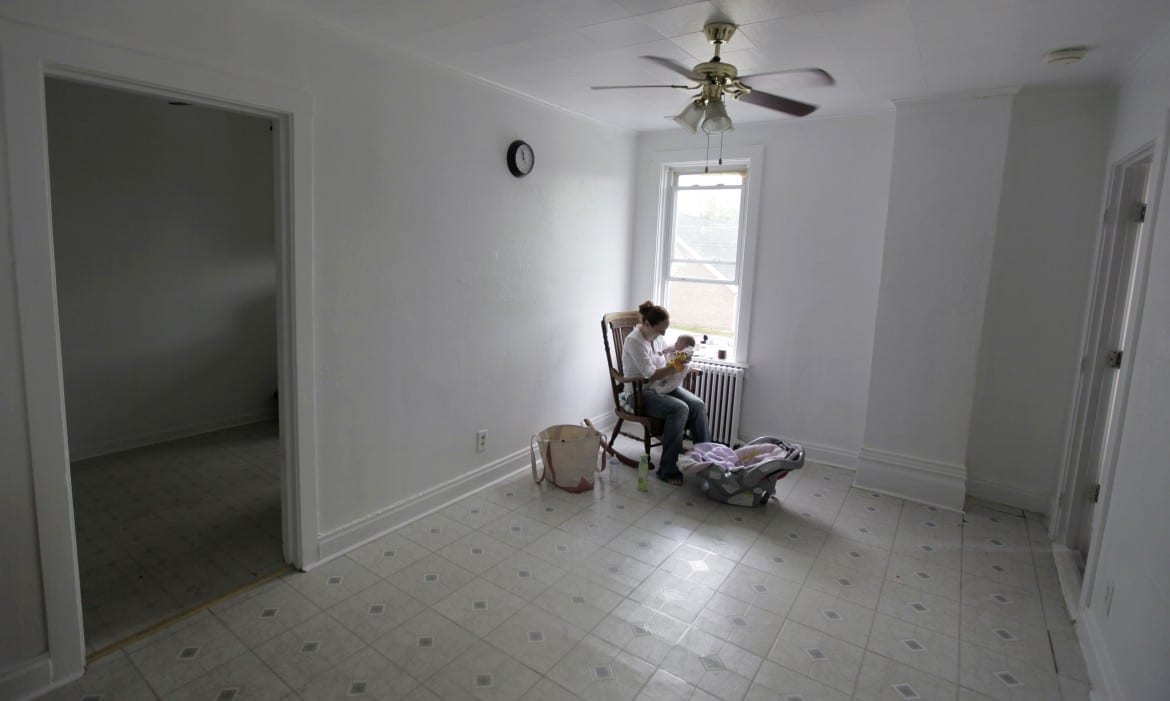 In this AP file photo taken July 22, 2009, in Round Lake, Ill., Hazel Evans spends time in her new apartment with her infant daughter, Autumn Evans. At the time of Autumn's birth, Hazel was 19, had no job or home of her own, and was already struggling with 2-year-old twins. (Photo: AP/M. Spencer Green)
Share this story

On July 16, KCMO City Council members are expected to vote on the issue of whether or not to raise the city’s minimum wage, potentially up to $15 per hour by 2020. It’s a highly contentious issue with the business community threatening it would trigger layoffs, and fast-food workers and others rallying and fasting in support.

One key issue that supporters say a raise in the minimum wage would address is the high cost of child care for struggling families. It may prove to be a catch-22: Low-income families would see more income, but it may prove to eliminate much-needed subsidies many of these families rely on to keep their children in childcare and early education programs.

In January of this year, President Obama announced a handful of proposals aimed at ensuring that all children receive high-quality childcare and early education. Included was a series of investments, legislation and an increase in the child care tax credit meant to help defray the high cost of care for working-class families.

The White House, in its announcement, estimated costs for child care to be around $10,000 a year per child. That’s hardly an affordable undertaking for lower-income families: The amount would be nearly half of the take-home income for a family of three at the federal poverty level, making $20,090 annually.

The administration keyed in on the predominant barrier for many parents struggling to find adequate daytime care for their children: cost.

The Obama administration’s estimates for child care fall in line with what families in the Kansas City metropolitan area pay. At most centers that serve low-income families, rates hover around $200 a month. It’s a little more for infants and less for toddlers and preschoolers.

In Kansas City, Operation Breakthrough runs one of the largest early learning centers in the area. There, the average income for families is just under $13,000 a year, and 81 percent of families receive food stamps. This means many of the families rely on federal subsidies to pay for care.

Mary Esselman, CEO and president of the organization, said balancing their benefits and jobs is one of the biggest challenges for the families.

“If they make too much, they lose their benefits,” she said. “They may only be making minimum wage, but just a small increase or a few extra hours can make a difference between getting benefits or not … and the extra hours aren’t enough to cover the loss.”

According to data from CLASP, a Washington, D.C.-based organization that advocates for economic security for low-income families, a family of three in Kansas last year could receive child care assistance if they made $36,144 or less annually. In Missouri – which has one of the lowest income limits for subsidies in the nation – the number is $24,036.

“Our concern is that a lot of children end up in kinship care, which isn’t necessarily a bad thing, but it isn’t always the greatest thing.”

Even with subsidies, families at the poverty level in Missouri still pay more than $100 monthly in copayments for care per month, equaling about 7 percent of their income. Kansas has a more generous policy, leaving only about $60 per month in copayments for families to cover.

In Kansas, families can continue receiving assistance in the month they lose their job if they are searching for a new one. In Missouri they can receive funds for 30 days after a job loss.

Christine Johnson-Staub, interim director of childcare and early education for CLASP, said states make most of the decisions regarding subsidy eligibility and how the money is spent. Most states have minimum work hours (28 in Kansas and 20 in Missouri).

In 2014, Congress reauthorized the federal child care subsidy block grant program for the first time since 1996. Among the changes, it now requires that states continue subsidies for a 12-month period even if the family loses employment or their schedules are altered.

A range of barriers

It is more than affordability or lack of subsidies that keeps low-income working families on the hamster wheel.

Scheduling is a major factor that controls both where parents work and where their children receive care.

Susan Knittle, vice president of early education at the YMCA of Greater Kansas City, said their centers are open from 7 a.m. to 6 p.m. Many of their families work in retail or fast food establishments, meaning they have irregular schedules and often work outside of the traditional daytime hours.

“Many (families) have to make arrangements for the days and times we are not available to them,” Knittle said. “Our concern is that a lot of children end up in kinship care, which isn’t necessarily a bad thing, but it isn’t always the greatest thing.”

According to statistics from CLASP, about half of all low-wage workers have jobs with unpredictable scheduling. This can include aspects like mandatory overtime without a lot of notice. They often have little control over their hours, and their schedules are more likely to fluctuate from week to week than higher-wage occupations. Those who work part time can also be vulnerable to cutbacks when work is slow.

“All of these moving parts are difficult to conceptualize,” Gardner said. “It is easier to just say no to a job because of the complexities, and then they are back on the hamster wheel.”

Transportation is also a major obstacle for employment and child care for many parents. According to Esselman, fewer than 30 percent of jobs in the metropolitan area are accessible by public transportation. In the lowest income areas of Kansas City, anywhere from one-tenth to one-third of households are without cars.

Brijin Gardner, director of clinical and social services for Operation Breakthrough, said some of their parents who use public transportation spend hours a day riding the bus or walk miles either to child care or their jobs. Others go to work early and have someone else take their kids to child care. After work, they go back to the center and stay there until they have someone else who can give them a ride home. She hears stories of parents who turn down much-needed work because the job is not near public transportation and they have no car.

“All of these moving parts are difficult to conceptualize,” Gardner said. “It is easier to just say no to a job because of the complexities, and then they are back on the hamster wheel.”

Tags: disparity • education • Getting By in KC