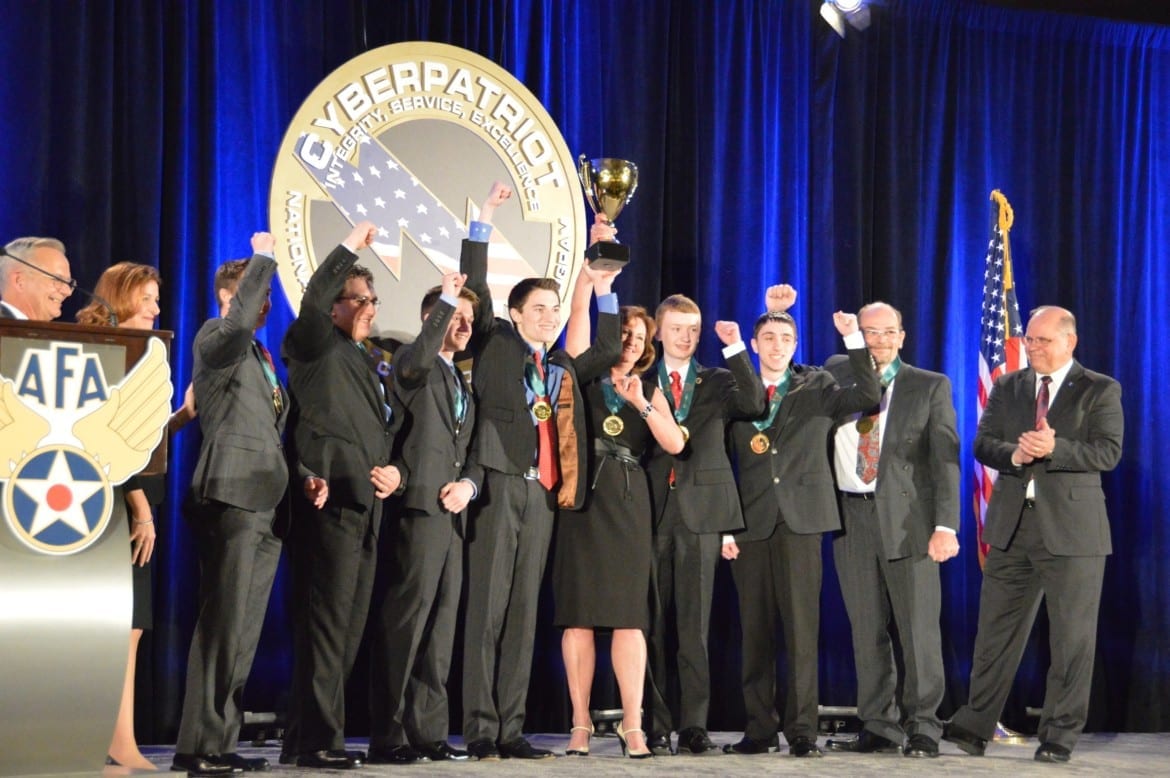 The high school team from Summit Technology Academy celebrates its win at the national CyberPatriot competition in Baltimore last week. See the video above for interviews with team members as they prepped for the competition and for insights on how CyberPatriot enhances classroom instruction. (Submitted photo)
Share this story

And the winner is …. Team Sudo from the Lee’s Summit School District.

Taking its name from an abbreviation for an old computer command related to a “super user,” someone with top security privileges in a type of computer operating system, Team Sudo bested more than 1,600 teams nationwide that began the competition in October.

The win provides a $2,000 college scholarship to each of the six team members.

Sponsored by the Air Force Association, a nonprofit that advocates for U.S. aerospace superiority and a technologically superior work force, CyberPatriot prepares competitors for careers in computer security or related fields.

This is the fourth straight year that Lee’s Summit’s CyberPatriot coach, Lisa Oyler, has taken teams to the finals.

And though her students have previously won a separate challenge that is part of the CyberPatriot finals, this is the first time that one of her teams took top overall honors in its division. (The district also took a middle school team to nationals this year, and it took the runner-up spot in a three-way race.)

In the competition, high school teams earn a combined score in three categories, which this year included responding to a breach of a Facebook page.

For more than a month leading up to the competition, Team Sudo trained two nights a week and for four hours on Saturdays. So, as might be expected, team members were elated with the win.

“I had to pry the trophy from their fingers just to get it home,” Oyler said. They wanted to take it on the plane rather than have it shipped.

Winning it all sets a high bar, and Oyler said the competition is just going to get tougher as the number of teams in Summit Tech’s division increases by as much as 30 percent each year. There were about 400 teams when the school started competing five years ago, and Oyler expects five times that amount next year.

So realistically, she said, just making it to finals seems to be a good goal for future competitions.