Mastering the uphill climb to college

Not all graduates are equally prepared for college. Here’s what Wyandotte High School is doing about it. 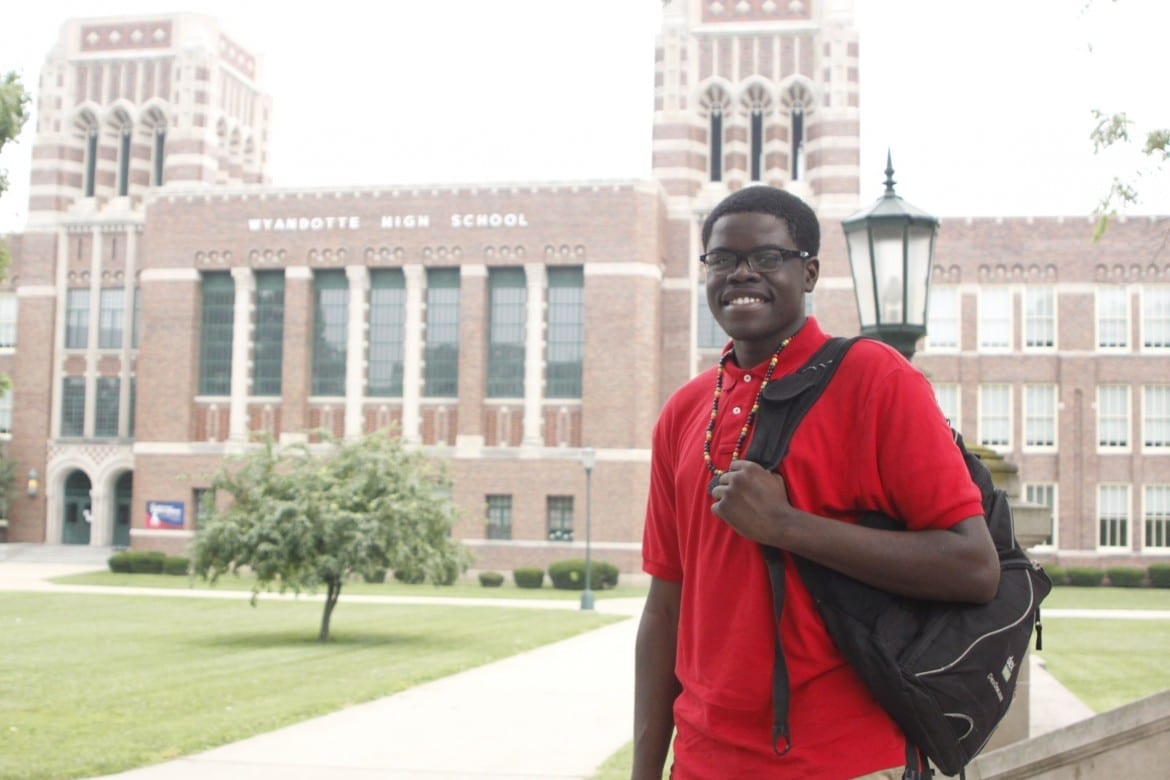 Donte Walters was on "cruise control," doing well his senior year at Wyandotte High School. But his principal, who has worked to raise student expectations and challenges, had other plans. Photo: Matt McClelland/KCPT
Share this story

Donte Walters thought he had cruise control set for his senior year at Wyandotte High School.

He had earned A’s throughout high school, ranked in the top three of his class, participated in sports, and was accepted into the University of Kansas.

But in spite of all this, his principal says she panicked during last year’s holiday break when she reviewed his transcripts.

Donte had managed to get by without taking a single class for college credit. Given his academic record, most principals wouldn’t have thought twice. After all, he was doing well enough. But Wyandotte High Principal Mary Stewart was worried, she says, because she’d watched this kind of thing happen before: Donte, she believed, was avoiding the possibility of failure.

Stewart knew that Donte could be a first-generation college graduate. But pioneering that course meant that learning how to overcome hardship – a given in college and life – could be difficult for him. She had watched other star students fall flat once they got to college.

So, when the first bell rang one day that January, Stewart wasted no time.

Now, Donte has completed two college courses – before even setting foot at KU – and he confirms Stewart’s instincts were correct. He had been playing it safe.

“I was worried about messing my GPA up,” the 18-year-old said.

By the time Donte graduated in May, Stewart could look his family in the eye, knowing their son was ready.

“I’m glad they pushed me,” says Donte Walters. He’s on his way to KU, with two college classes on his transcript, thanks to a college-readiness program at Wyandotte High School. (Photo: Matt McClelland/KCPT)

At Wyandotte High School, Donte Walters is hardly an anomaly.

Stewart has made it her job to search out students fearful of failure. And the cognitive component – students’ ability to tackle challenges and bounce back from failure – has become one of her biggest challenges.

“Unfortunately, too many times our kids have been told what’s not possible for them,” Stewart said.

It’s likely they’ve experienced failure before in some capacity.

The problem, Stewart said, is that she sees too many students who might not have learned to bounce back from failure. Or appreciate the lessons failure can offer. A lack of support networks for economically disadvantaged students can make bouncing back from failure more difficult – both practically, and cognitively.

“(Students) are real champions at avoidance of something if there is failure involved,” she said. “And we have to allow them to get into situations where they do fail but understand how to pick themselves up.”

It means that when it comes to preparing students for college, the district has to adjust and account for disparities in many different ways, including the idea that college might not be discussed in every household the way it would be in some suburban households.

At Wyandotte, Stewart builds the college expectation day in and day out. She celebrates every last college scholarship earned by her students during morning announcements to the school of 1,500. The school plasters every acceptance letter to the wall in the college counseling room. Teachers wear college T-shirts on a specified day and set up campus tours just as some parents might in other school districts.

Within the central office, district administrators are constantly thinking about it too. But they don’t spend countless hours lamenting about the disparities between KCK and the suburbs. They take a different approach, said KCK Schools Chief of Staff David A. Smith.

“We think about what our kids need generally to be successful in life,” Smith said. “But we don’t assume that they will have it based on their life circumstance.”

The approach has launched several initiatives in the last several years that directly address disparity, or the differences in opportunity and achievement between students from higher and lower socioeconomic groups. For instance, the district loaned laptops to every high school student years ago, when statistics proved their kids didn’t have technology to complete basic homework. The district doesn’t charge students to be part of an athletic team with the belief that it’s an academic motivator and unaffordable. The district requires and pays for every student to take the ACT, acknowledging that it’s the best way to show college readiness. And – after realizing high school students weren’t eating a breakfast necessary for brain development – they accessed a federal program to serve it daily inside the classroom.

The initiatives often draw at least the initial ire of conservative Kansas lawmakers, but even those critics have been largely silenced as the programs test interesting new ground.

One of the biggest changes in recent years happened quietly, as the district sought to challenge its own academic downfalls with a program called Diploma +. It was created in the wake of a tipping point, when Superintendent Cynthia Lane testified in 2012 at a school funding lawsuit.

There she publicly testified that her district needed more money and resources to help students break the cycle of poverty. She explained that at graduation she happily shakes hands with graduates. Yet she knows that only 34 percent of district students would go on to college and only about 24 percent would return for a second year.

“They may be able to receive a letter grade to pass a class, but they truly are not ready to get a college degree,” she told the judges.

These are lofty goals in a district where graduation rates still lag well below the state average. But it’s not beyond reach, Smith said. It’s all part of a carefully considered greater higher-education plan. Completing a year of community college or earning a technical degree during high school is essential, Smith said, in part because it saves money. However, it also acknowledges that many students must work their way through college.

“If they have a technical credential they’ll be able to work beyond a fast food job,” Smith said.

A certified nursing assistant is likely to earn better money and offer a more polished resume than if the same motivated person were cooking burgers.

The program recognizes too that simply earning a high school diploma is not enough to show a student is college ready, let alone earn a living wage. It’s not enough to break through the cycle of poverty.

The ACT target score of 21 ensures students will be accepted into most Kansas universities. Ideally the score will shift to 25, Smith said, to align with what students must earn to be eligible for strong scholarships.

Meanwhile, at Wyandotte High School, Stewart loses sleep at night thinking about how to move students forward – beyond even what Diploma + expects. She knows it takes more than good study habits and past academic history to make it in college. Students have to be mentally prepared to navigate obstacles. Stewart doesn’t like to call it brainwashing, but she admits that she seeks out daily ways to associate school, long-term goals and careers with positive energy.

“Happiness is an important trigger,” she said. “It’s got to be about going after your passion.”

For Stewart, that means getting students in the right frame of mind. This is where she addresses the cognitive component.

“We’ve got to figure out how to create that hope,” she said.

Stewart works from day one with the students to build a strong foundational approach to college. Freshmen start a day early not just to get acquainted with school but to attend a career fair. They hear from professionals throughout the community who explain their job and get students thinking about possible careers.

Stewart unapologetically bombards students about college regularly. It’s why she was stunned to see Donte had slipped through the cracks.

Sitting outside his alma mater at Wyandotte High School on a recent, overcast Tuesday, Donte laughs and admits he had flown below the radar, wanting to be on autopilot during his last semester.

He was a student athlete, and that meant he didn’t have a chance to start studying until after 8 p.m. nightly.

“It was very difficult, but I’m glad that I went through the process,” he said. “I’ve got to learn how to multi-task.”

Stewart says she knows Donte’s mom is counting on the principal to help her son have an easier path.

It’s a road that was more difficult for his parents. Donte said his dad turned down a college baseball scholarship years ago.

“He was hard-headed. He didn’t want to go,” Donte said.

His mother attended college classes and tried to go back a few years ago, but it didn’t work out.

“She tried,” he said proudly of her effort.

Now, after wrapping up two college-level courses, Donte seems to have fresh determination. He’s taking a third college class this summer while working at Hy-Vee.

He’s also learning how to handle challenges. Donte admits that the college-level algebra he took his last semester of high school was the most challenging of his high school experience. And he figured out how to work his way through it. For his principal, that might be the most valuable lesson of all.

“If he wouldn’t have had the college classes I don’t think he would have been college ready,” she said.

Donte doesn’t disagree. Before pointing out architectural details of his former high school, and posing for a few photographs, he says at KU he hopes to study and volunteer with the men’s basketball team. He knows it won’t be easy. He won’t have the strong support network he enjoyed in KCK. But he said he’s ready for the challenge.

Tags: disparity • education • Getting By in KC