How one KC church creates an honest place to talk race 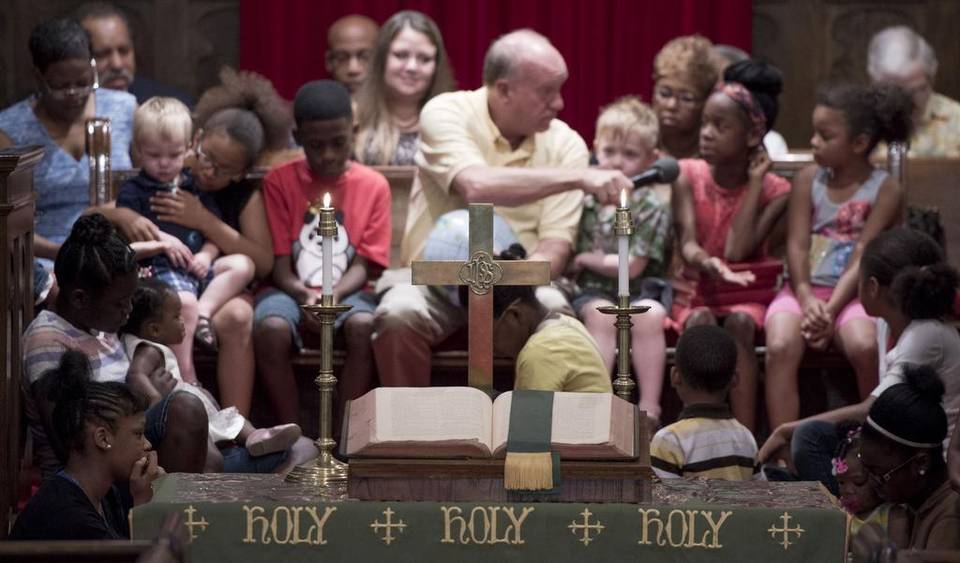 Ever since debates about race intensified following Ferguson and Baltimore and New York and South Carolina, a question directed at white people has grown sharper.

Do you have any African-American friends?

Not associates you see only at work. Not people you run into at your kids’ sports events. People you really talk to. Friends.

At a forum this year, Kansas City Mayor Sly James broached the matter at a discussion of the ways that white America could come to better understand black America.

Understanding won’t be achieved, James said, at well-meaning panel discussions or diversity seminars. It will happen when white people invite black people to their homes to watch TV, for example.

It won’t happen, he said, until white people are involved in black people’s lives.

Participants nodded. It was a straightforward thought and a stark reminder. In 2015 in America, the reality is quite different for many.

Three-quarters of whites have completely white social networks — no minorities, according to surveys by the Public Religion Research Institute.

Sheer numbers account for some of that. It’s more likely that white people would have to make an effort. What happens when they do?

At the forum, the Rev. Kirk Perucca, pastor of Covenant Presbyterian Church, said the members of his small church at 60th Street and Swope Parkway, about three-quarters African-American and one-quarter white, make the effort.

They pray together, and they get involved in each others’ lives, Perucca said.

Some members are from the neighborhood, including customers of the church’s food pantry, but many come from across the area.

Actually, church is not the most likely place to look for such examples. The Rev. Martin Luther King Jr. famously noted that 11 a.m. Sunday was the most segregated time in America.

A lot of Covenant’s history is about race, with an open attitude.

“There’s nothing that’s off the table,” Perucca said. “You’re interacting with folks of different races every minute you’re here. We disagree at times, but we never fracture along racial lines.”

We met two church members, Sherry Templeton, who is white, and Keith Marshall, who is black. We invited them to interview each other about the diversity at their church and how they came to be members there. In partnership with The Star, KCPT’s Hale Center for Journalism produced a video of the conversation.

Marshall was 8 years old when his family moved to the neighborhood near the church. Right away, he said, Covenant’s white pastor, the Rev. Bill Stark, knocked on the door.

“He came to our house,” Marshall said. “We didn’t know him. He came and spoke about what the church had to offer.”

Just a typical pastor visit with a new neighbor, right? Not in 1968, Perucca said.

That was the era of block-busting, he said. After white neighborhoods were finally opened to black families, whites were urged to move out as blacks moved in.

It was a few years earlier, in 1963, when the all-white neighborhood around the church began to transition racially. But the church was welcoming to its new black neighbors, not always typical at the time, Perucca said. So was the church-sponsored Boy Scout troop, which invited African-American boys to join.

“As far as prejudice, I never saw it at Covenant,” said Marshall, 56, who added that he did recall incidents at his elementary school. A white teacher slapped him in the face for talking back, he said, something he never told his mother about.

The story made Templeton gasp.

Templeton, 68, grew up in Raytown. Her family had strong ties to the Presbyterian Church. For more than two decades she was a teacher and administrator at schools for children of U.S. military families in Germany, Japan and Italy.

On a two-year leave from her job in 1997, she visited Covenant and liked that its diversity reminded her of the multiethnic environment in the military.

This, she thought, is what God’s table is supposed to look like.

“I believe Jesus knew what he was talking about,” she said, “that we are all improved by diversity. I decided this is how I should walk the talk.”

So when Templeton returned to Kansas City for good in 2003, she knew she would make Covenant her church home.

Templeton recalled one of her first experiences at the church. Members had gathered to evaluate the church, she said, and she was amazed at their openness with each other and their willingness to identify their own faults.

“I thought, ‘This is the most honest group of people I’ve ever seen in my life,’” she said.

At ease with one another

People feel safe talking to each other, Templeton said. She’s always felt that way with Marshall.

“I haven’t had the life experiences you’ve had,” she told him, “but I want to know what it’s like. I can ask you things I couldn’t ask a lot of people.”

For instance, about black people and their relationship with police.

Templeton told Marshall how comforted she feels when she’s driving late at night and sees a patrol car driving nearby.

“Thank heavens,” she thinks, “if anything happens, there’s a policeman to help me out.”

Not so for Marshall.

“I think, ‘Oh no, I know I haven’t done anything wrong,’” he said, adding that if he’s stopped he immediately turns on his interior light.

Templeton asked Marshall about the police shooting of Michael Brown in the St. Louis County suburb of Ferguson. She wanted to know how he processed the news.

First, he said, he wanted to hear as many facts as possible before drawing a conclusion. In the end, he thought Brown was unjustly killed.

She asked him whether he was surprised about the encounter and others like it.

No, he said, because it was the kind of thing that happens every day.

“Somewhere in the United States there’s a young black man getting beat by a white police officer,” he said. “Somewhere.”

At the adult Sunday school group, Templeton was moved by the overpowering sense of sadness voiced by the group’s African-American women during a discussion about the Ferguson shooting — and then by their further distress when outsiders descended on the neighborhood to create more disruption.

Templeton said she knows her life is richer in a church community that offers “diversity in everything.”

For all — as members and friends worship together, minister to the community, study together in small groups and work on social justice issues — she said, the trusting atmosphere creates an unmistakable feeling of well-being.

This story was produced in collaboration with The Kansas City Star’s “Under Our Skin” series, which aims to foster a conversation that will help us learn from one another’s experiences. If you have story ideas, please send them to David Frese at dfrese@kcstar.com, Kathy Lu at klu@kcstar.com or Janet Saidi at jsaidi@kcpt.org.