Kansas Teachers Respond to State of the State When school let out in Johnson County on Thursday, fifth grade teacher Barbara Casey hopped in the car with a fellow teacher and two parents to drive to Topeka, Kansas for Gov. Brownback’s State of the State address.

“The main reason I came up there was not for myself,” Casey said. “It was really for my students, for public education and I’m really concerned that students won’t continue to get the great education that they have been getting.”

About 138 teachers and education supporters clad in red shirts were at the capitol Thursday evening to quietly demonstrate during Brownback’s speech. 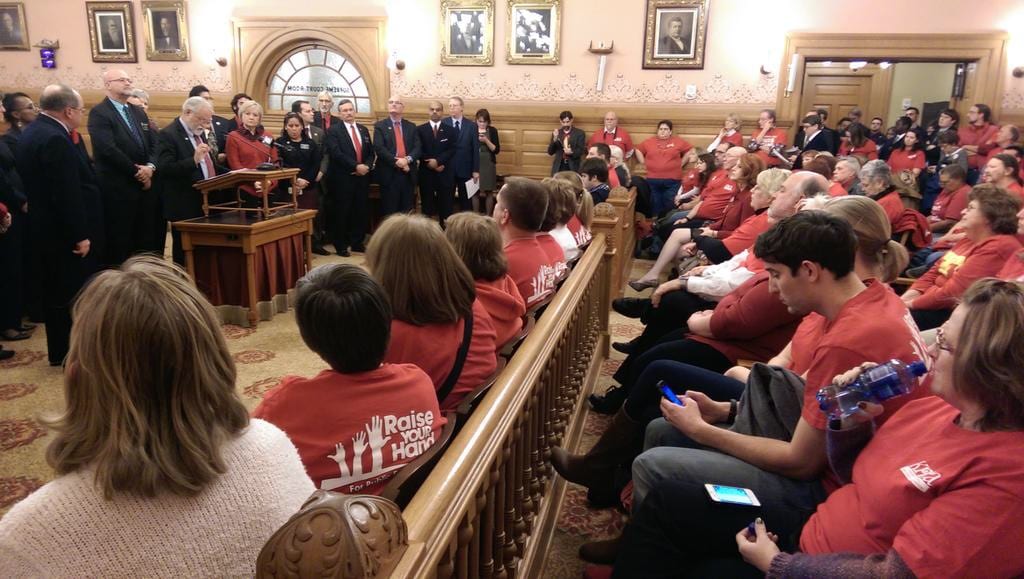 At the same time that the state is projecting a budget shortfall of $710 million, educators like Casey have been at odds with Brownback’s administration over school finance.

An ongoing lawsuit filed by several school districts in 2010 accuses the state of underfunding education. In December of last year the Shawnee County District Court suggested that the state increase its education funding by $802 more a year per public school student, which could put the state another $548 million in the hole.

“I think the overall sentiment was that it just didn’t seem like (his remarks) were grounded in reality,” said Casey. “The governor restated his commitment to zero out income tax, and it just doesn’t seem possible to fund public education and other state services if he continues that.”

Gov. Brownback said during the speech that the legislature should repeal the state’s existing school finance formula and create a new one.

“That formula should reflect real-world costs and put dollars in classrooms with real students, not in bureaucracy and buildings and artificial gimmicks,” Brownback said. “That formula should be about improving student achievement and school accountability, not bureaucratic games.”

Brownback also remarked that the state should change how it selects its Supreme Court Judges, who continue to rule that the state is not adequately funding education.

“Governor Brownback continues to spin this as a court problem,” Kansas National Education Association communication director Marcus Baltzell said. “Just because a criminal doesn’t like a verdict, doesn’t mean he gets to change the law in his favor and that’s exactly what Governor Brownback wants to do.”

Baltzell added later that he is not calling the Governor a criminal, but questions the governor’s attempt to circumvent the legal process.

Meanwhile, when Casey returns to her classroom on Friday morning, she said she’ll be thinking about a disconnect between what teachers do and what legislators think teachers do.

“I think the governor just doesn’t get it and that a lot of our legislators just don’t get it,” said Casey. “These children, our students deserve so much and they deserve every elected official in Kansas doing everything they can to make these kids get a great education.”

A full transcript of the Governor’s speech is available here.