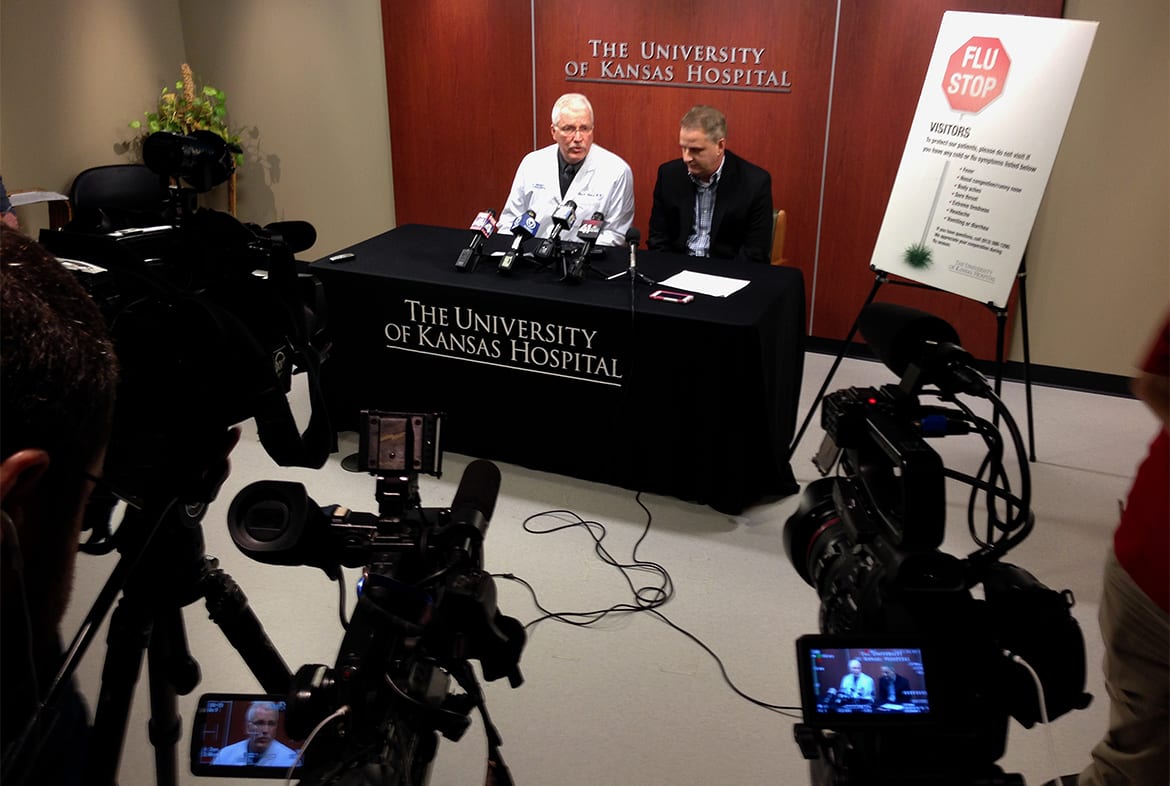 A top health official at the University of Kansas Hospital said the severity of this year’s flu outbreak is requiring inpatient admissions at a rate more than three times that which it generally sees during flu season.

Dr. Lee Norman, the hospital’s chief medical officer, said at a news conference Tuesday that 36 people were in the hospital with confirmed cases of the flu or with flu-like symptoms. He said he could not remember a time when inpatient cases exceeded 10.

KU officials said the hospital has had two flu deaths this season, both occurring within the past two weeks. They said privacy laws prevented them from providing any information about the victims.

Norman and Larry Franken, chief epidemiologist for the Wyandotte County Health Department, said health officials won’t know for a couple of weeks whether this marks the peak of the outbreak or whether it might persist at high levels until late January or early February – typically the height of flu season.

“We do not know how long this will last,” Franken said.

Norman and Franken urged people who have not already done so to get a flu shot, even though the predominant strain this year has “drifted” somewhat genetically from what was expected. Norman said that means that part of the vaccine is only about half as effective as desired.

According to the U.S. Centers for Disease Control and Prevention, Kansas and Missouri are among 36 states experiencing widespread flu activity.

Both states are also among about two dozen that reported the highest level of influenza-like activity gauged by the CDC for the week ending Dec. 20.

Norman said it appears the outbreak is hitting other hospitals in the Kansas City metropolitan area just as hard as it’s hitting KU Hospital.

At one point on Monday, he said, 10 of the community’s 28 hospitals were diverting ambulances from their emergency rooms, which – along with clinics and urgent care centers – have been clogged with patients with the flu or respiratory illnesses.

“The virus does not stop at State Line (Road),” Norman said.

Contingency plans call for KU Hospital to set up treatment sites at its various outpatient clinics around the area – including specialties like orthopedics or physical therapy.

The hospital advised adults and children with flu-like symptoms that also include shortness of breath and other complications to seek medical attention.

Danger signs for children can also include bluish skin color and fever accompanied by a rash.

Hospital officials stressed the need for routine precautions against the spread of the flu, such as coughing into one’s elbow.

With winter break nearing its end, they also noted the importance of keeping children home from school when they are running a fever.

“I know a lot of people don’t want to miss out on the celebration for New Year’s,” he said. “But if you are sick, have a fever, definitely stay home because all you are going to do is obviously spread it to your friends or family members.”