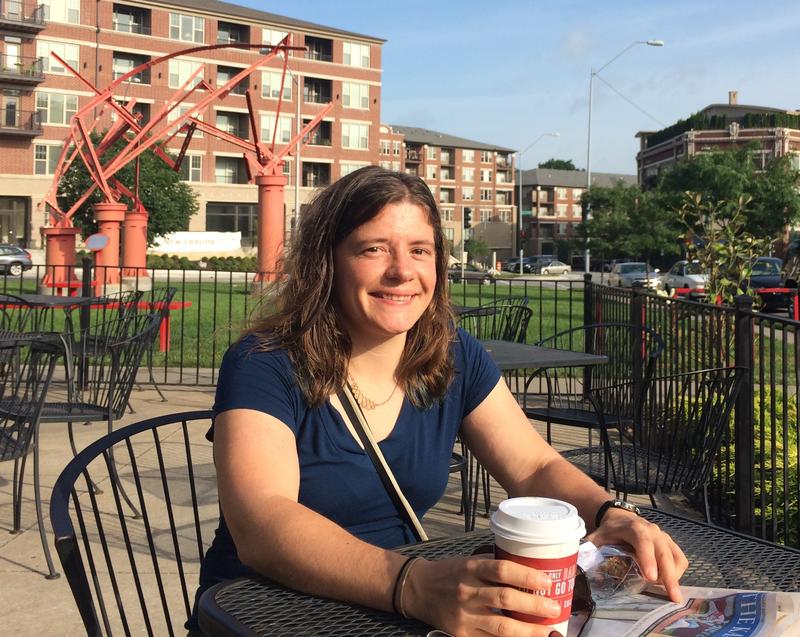 Music teacher Amy Hearting is one of 200,000 Missourians whose health insurance subsidies could be invalidated by the U.S. Supreme Court.
Share this story

Early on a Monday morning, percussionist and music teacher Amy Hearting of Kansas City reads a newspaper outside a coffee shop before going off to teach an elementary school workshop.

She loves her work but says she’s not in it for the benefits and certainly not for the big salary.

“I feel like I’m doing what I want to be doing in life,” Hearting says. “Unfortunately, it doesn’t come with health insurance, and it doesn’t really come with an annual income where that is an easy reality for me.”

Hearting, 35, had spent almost her entire adult life without health insurance. That changed last year when she got coverage through the federal insurance marketplace, healthcare.gov, and, with the help of Samuel U. Rodgers Health Center, secured a tax credit to help pay her premium.

“It’s nice to have the assurance that if something bad were to happen, I would at least be able to survive it,” Hearting says.

Hearting is one of nearly 200,000 Missourians whose health insurance subsidy may hinge on a Supreme Court decision expected in coming days. In Kansas, 70,000 people risk losing their subsidies if the court finds that only enrollees who got their coverage on state-operated exchanges are entitled to them.

Like 32 other states, neither Kansas nor Missouri set up its own exchange.  All told, some 6.4 million people in those 34 states stand to be affected by the court’s decision.

Without the subsidies, most of them will probably be forced to drop their coverage.

“Probably the majority of the folks that are receiving them could no longer afford to pay for their health insurance because they would now be responsible for paying the full monthly premium,” says Sheldon Weisgrau, director of the Health Reform Resource Project for the Kansas Association for the Medically Underserved.

If the Supreme Court strikes down the subsidies, Weisgrau says the result would be a classic insurance “death spiral” as the only the sickest hang on to their coverage while healthier enrollees drop out, driving up premium costs.

“There have been estimates that rates will increase anywhere from 50 to 200 percent next year for everybody that’s left in the marketplace and that will accelerate that cycle of people who cannot afford it. [They] will drop out, and those who are sick and really need insurance will figure out a way to pay for it,” Weisgrau says. “And insurance markets cannot survive when that’s happening”

And it’s not just those who get their insurance through Obamacare that will be affected if the Supreme Court upholds the challenge to the subsidies, Weisgrau says.

Insurers may be forced to raise rates on people who buy their insurance outside of the marketplaces and even on those who obtain coverage through their employers.

Those looking to Congress for help will find little consolation there, according to U.S. Rep. Emanuel Cleaver, who represents Missouri’s 5th Congressional District.

“People are concerned, and people are scared and rightfully so,” Cleaver, a former Kansas City mayor, says.

Cleaver, who supports the Affordable Care Act, says Congress could fix the law to clear up the language that led to the lawsuit. Or it could create a contingency plan to help those in danger of losing their subsidies.

But in a polarized political environment, he’s less than hopeful.

“I think that people would feel a little better if they had an idea that something could be done in a reasonably short period of time, and I cannot assure them of that,” he says.

In theory, state legislatures could also act to protect residents and insurers from the loss of their subsidies. But Weisgrau says most states have no backup plan.

“There are things that our state elected officials could be doing to mitigate the possible adverse effects, and if they have any plans, they are keeping them a secret,” he says.

While it’s unclear how a Supreme Court decision striking down the subsidies will ultimately play out, Amy Hearting says she knows what will happen to her if she loses her subsidy.

“It would mean that I would lose the insurance again. Getting privately insured – it would cost more than half of what I pay for rent, and that’s a cost I can’t take on by myself.”