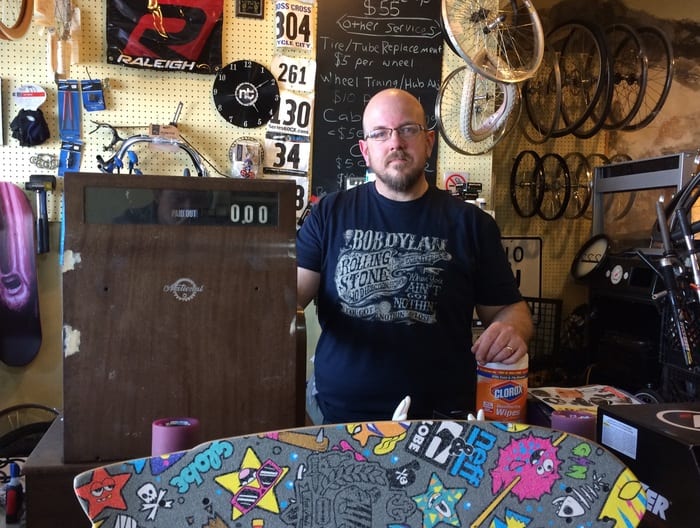 Just outside St. Louis, Missouri, on a high, windy bluff overlooking the Missouri River, a trio of grey-haired cyclists pump up tires and make adjustments to their bikes while their friend Henry Lazarski paces the parking lot, eager to get rolling.

Lazarski, a 73-year-old real estate lawyer from Paris, France, traveled to Missouri to ride the Katy Trail, which stretches almost the entire width of the state just short of Kansas City. At about 240 miles, it’s the longest continuous bike trail in the country.

This is Lazarski’s first time in Missouri, and he admits he knows little about the state.

“I have no idea at all!” Lazarski says. “I don’t know what to expect. I’ve never been to this part of the world, and I’m interested to see what it has to offer.”

The Katy Trail has been drawing increasing numbers of cycling tourists like Lazarski in recent years, and advocates say it now generates $18 million in tourist spending per year.

Now they hope to re-create that success in the upper-southern part of the state with the conversion of the abandoned Rock Island railway line into a new 145-mile recreational trail. When that’s completed, the two trails will form a loop of more than 400 miles, which would rank among the longest bike trails in the world.

But a glut of lawsuits could make the overall cost of the new Rock Island Trail much higher than the Katy’s.

As an example of what bike trails can do to boost the fortunes of rural areas, trail supporters point to Bluffton, Missouri.

In a quiet stretch of the Missouri River valley, retired construction worker and bass fiddler Doug Rendleman opened one of the first bed-and-breakfasts catering to cyclists along the Katy Trail.

Completed in 1990, the trail was a project of the Rails-To-Trails Conservancy, a nonprofit organization based in Washington, D.C., that works to convert abandoned railroad lines to recreational trails.

Rendleman says he started looking for property along the railway back when the Katy plan was first announced. He found an abandoned farmhouse for sale and spent years fixing it up.

Nights at Rendleman Home Bed and Breakfast often end with sing-alongs around a bonfire, with the proprietor himself on bass taking requests.

“Monty Python!” Rendleman says. “Anything from Monty Python, everybody loves. That just goes over great!”

Far from any city or interstate, Bluffton has struggled in recent years, but several residents have followed Rendleman’s example and started their own cycling-related businesses.

Rendleman says spending from cyclists has become a steady and growing source of income for many in the region.

“If it wasn’t for that money, the towns wouldn’t be here. Period,” Rendleman says. “There’s nothing else to draw anybody.”

About 60 miles southwest of Bluffton, the town of Meta, Missouri, seems like a good candidate for its own cycling stimulus.

The northern Ozarks town of 229 residents has been losing population but the Rock Island trail could send a stream of cyclists and money right through its middle.

Many nearby residents, however, aren’t happy about the plan.

“I just got a hundred acres here. Three-quarters of a mile of track,” says Rodney Luebbering, a farmer, as he drives his pickup down a pair of thin muddy tracks in the northern Ozarks.

He points out where the old Rock Island railway line cuts his alfalfa field in half. It’s been abandoned for nearly 40 years and it’s overgrown with trees.

Luebbering says cyclists passing through this remote farmland would endanger themselves and the crops.

“If the trail goes through, we’ll probably fence it out and start putting cattle down here, ’cause I don’t want to take the risk,” Luebbering says.

He may not like the bike trail coming through, but there’s not much he can do about it. In 1990, the U.S. Supreme Court upheld the federal law that allows railways to be converted to recreational trails.

The law applies even where the land is privately owned and the railroad only acquired an easement to the land.

Since he can’t stop the recreational use of the property, Luebbering and hundreds of other Missouri landowners say they should be paid for it.

Not long after the federal Surface Transportation Board approved the Rails-To-Trails conversion of the Rock Island line in February, St. Louis lawyer Mark “Thor” Hearne, a partner with the Arent Fox law firm, filed a lawsuit on behalf of 237 Missouri plaintiffs (it has since grown to more than 300) seeking compensation from the federal government.

Hearne has been arguing these kinds of cases for nearly 20 years, but he says a Supreme Court decision in 2014, Brandt vs. United States, has made his job a lot easier.

The court affirmed what he’s been arguing all along: When an easement’s use is changed, the landowner is entitled to payment.

Hearne now represents some 3,000 landowners in multiple suits nationwide seeking compensation for the taking of their property.

Some legal experts have speculated that the cases could cost the federal government hundreds of millions of dollars, which would greatly increase the overall price tag of Rails-to-Trails projects.

But Rails-To-Trails organizers consider the suits a mere distraction.

“That’s an issue between the Justice Department and the landowners,” says Eric Oberg, trail development manager for the Rails-To-Trails Conservancy’s Midwest Regional Office.

Oberg says the suits won’t affect trail funding and will have no impact on the trails being built.

“The payout for any takings losses in the courts – that doesn’t affect funding of the development of the trail,” Oberg says. “All it does is hurt the federal treasury and reward frivolous lawsuits, frankly.”

The ultimate question for many along the Rock Island Trail, however, isn’t how much money they’ll get but when the trail will come through.

“It’s been a little frustrating,” Voss says. “We were hoping there would have been more progress by now.”

He knows the conversion will be expensive, but he sees the former railway as the key to a healthy future for his town.

“The bike trail is being built on those rails and also will be bring revitalization.” He says.

In the meantime, cyclists and business owners looking for an economic shot in the arm probably shouldn’t hold their breath. Rails-To-Trails organizers say that completing the new trail may take not years but decades.