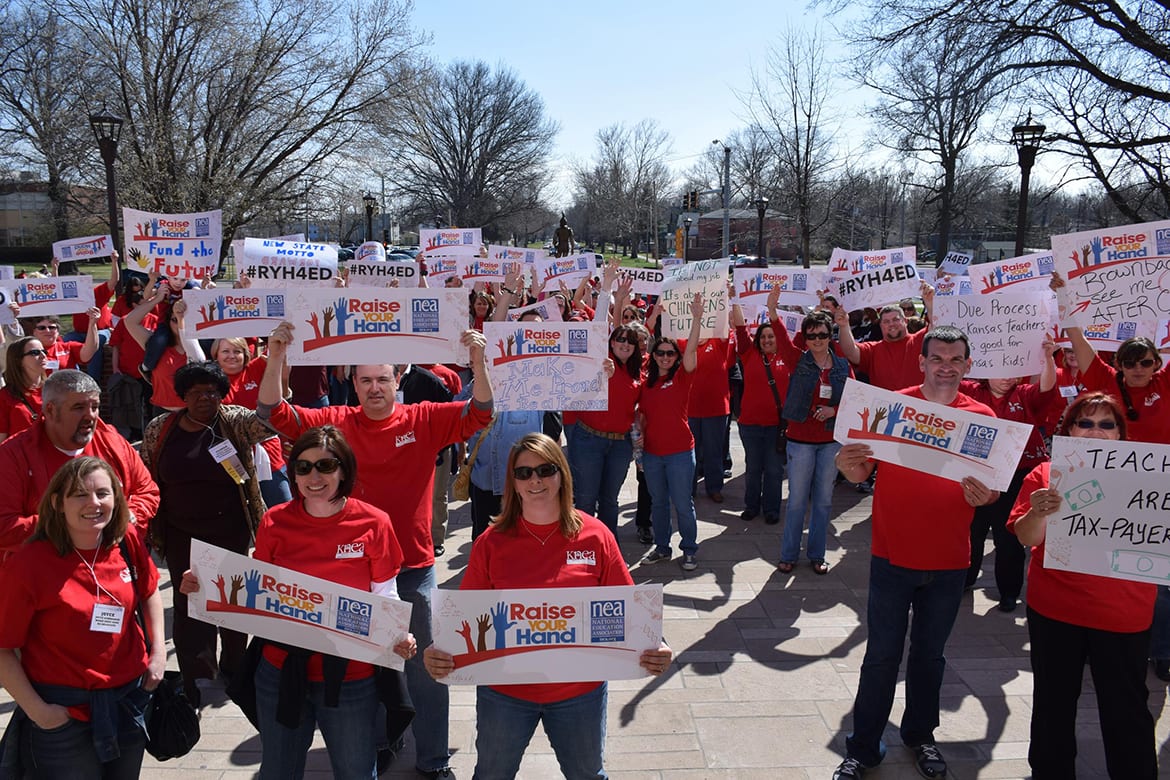 For the last 35 years school librarian Nancy McFarlin has been connecting Kansas students with information, but the veteran educator said she didn’t personally realize the informative power of Twitter until last weekend.

“I thought it was just one more thing to learn to do, (but now I find it) informative and current,” McFarlin, who sent her first Tweet last Saturday, said in an email.

McFarlin is one of tens of thousands of Kansas educators and education advocates, who are using Twitter to organize against the legislature’s recent policy additions to the school finance bill, which includes a provision that would end teachers’ right to due process before being fired.

According to Kansas National Education Association’s Director of Communications Marcus Baltzell, bridging the digital divide between Kansas educators, many of whom are nearing retirement age, and Twitter, whose average user is between 17 – 35 years old, required both preparation and a reason to take action.

“We’ve been able to galvanize teachers in a way that’s never been done before,” Baltzell said. “Having a cause eliminates the digital divide because they see the power of the tool and are willing to take the risk.”

Since Baltzell, a former educator himself, took over communications at KNEA several months ago, he has been building the organization’s social media presence. He said that last weekend was the culmination of those efforts.

“We started using #ksleg in all of our Tweets, which became a trend and increased our reach by over 1000%,” Baltzell said. “There were 300-400 red-shirted teachers in the State House last weekend, and that would have been it, but by using Twitter we can show that we reached tens of thousands of teachers and followers.”

Watching the explosion of tweets over the weekend moved Washington High School teacher Ryan Acosta-Fox to join fellow educators at the State House in Topeka on Sunday evening.

“Seeing so many updates from the State House assured me that going there was the right thing to do,” Acosta-Fox said in an email. “I wonder how many teachers could have been there if the legislature didn’t literally try to pass the bill in the middle of the night on a weekend – completely out of the blue.”

“Twitter has been a godsend–I have met so many wonderful educators who care so passionately about the state of Kansas education, and who invariably put Kansas students first,” Acosta-Fox said. “Simply by typing ‘#ksleg’ I can communicate with teachers and parents from all over Kansas and beyond–I was even retweeted by and corresponded with a teachers’ group from New Zealand. And I had a conversation with a teacher from Arizona facing similar legislative encroachments.”

Shawnee Mission School District parent Devin Wilson was also in Topeka last weekend but said he learned the power of advocacy through Twitter over a year ago, when he followed Heather Ousley’s 60 mile Game On for Kansas Schools walk to the capital from Merriam, Kan. to call attention to Kansas’ school funding.

“I have been immersed in education issues (for) the past year, after building my twitter network, and finding Game On for Kansas Schools,” Wilson said in an email.

Through Twitter, Wilson has also been able to connect with legislators and like minded people to discuss the educational issues that he sees as vital to Kansas’ future.

“I have learned that I have a deep connection with Kansans across the state, who are for Kansas schools, thanks to Twitter,” Wilson said. “I will continue to use Twitter as the simplest, easiest means of spreading ideas, news articles and true information regarding education issues affecting school kids in Kansas.”

KNEA also plans to leverage their growing Twitter following, and on Tuesday promoted a petition for Governor Brownback to veto the proposed policy additions using Thunderclap, an online service which helps causes gain attention by blasting out timed social media posts on a supporter’s Twitter, Facebook, and Tumblr accounts.

“For our part, we’re just getting started,” Baltzell.