Is driving for – and riding with – Uber worth it? 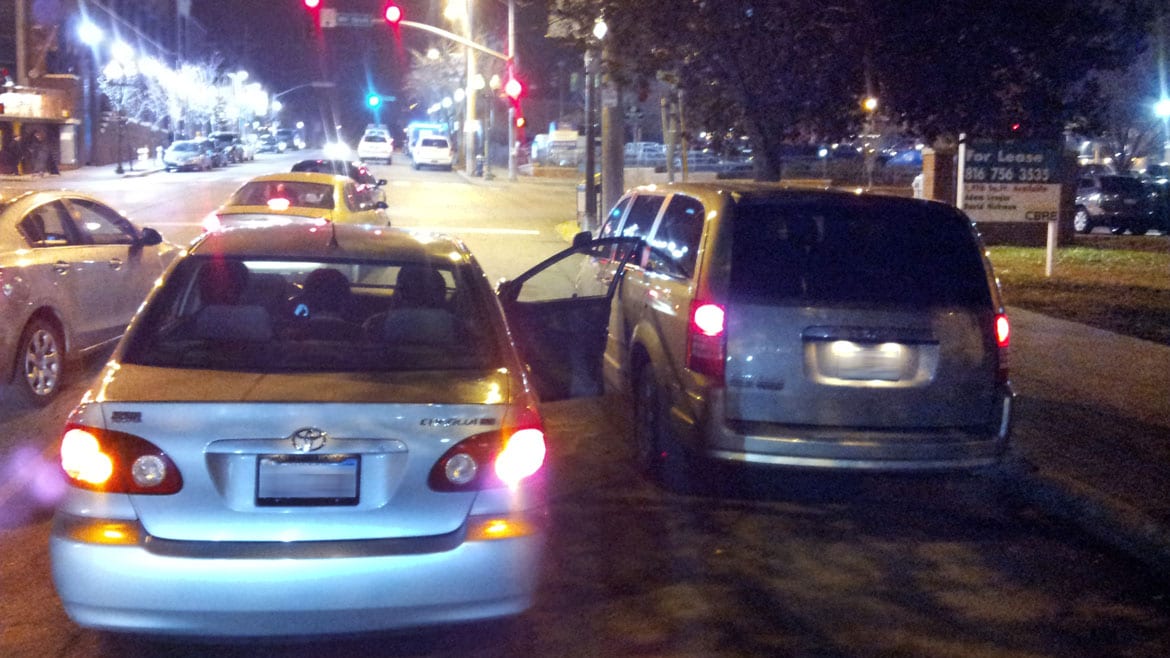 Ben McCarthy's car (left) was hit by the van (right). Both cars were driving for Uber at the time. (Photo courtesy of Ben McCarthy)
Share this story

The night before Thanksgiving last November, Ben McCarthy was out trying to make a little extra cash by driving for the app-based ride-hailing service Uber.

He was stopped at a stoplight in Westport when his passengers decided to jump out of the car right there and end the ride early. McCarthy said this wasn’t unusual — Uber passengers are often drunk and rowdy.

When they left the door open, a van that was trying to illegally weave around McCarthy’s car smashed into the side of the car, almost taking the door off entirely.

“It was very sudden,” McCarthy said. As it turned out, that van was also an Uber car carrying passengers.

McCarthy had been driving for Uber since last summer, and he said this was the first wreck he’d had. But even though the police accident report showed that he wasn’t at fault, it took six weeks, a long string of emails and a lot of arguing to get Uber’s insurance to pay for the repairs. 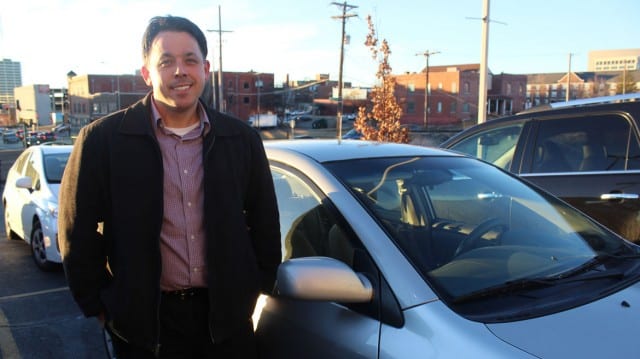 Looking back on what happened, McCarthy thinks the risks he took on as an Uber driver — and the hoops he had to jump through after the crash — just weren’t worth the reward of a little extra cash.

The debate over regulations of ride-hailing apps like Uber is not new. Cities all over the country have filed lawsuits, changed laws and tried to figure out a way to regulate the use of this new technology as the apps grow in popularity.

In Kansas City, Lyft has had to stop operations altogether for not complying with city regulations and is set to go to trial with the City of Kansas City, Missouri, in the coming weeks. The city manager’s office just released new recommendations to change taxicab ordinances to include regulations for transportation network companies (TNCs) like Uber.

The city manager’s office suggested several changes to the taxicab ordinance, but the most important change is that TNC drivers would be required to get a permit through the city’s regulated industries division. This permit would be issued by the city at no cost.

Right now, to become an Uber driver, you are required only to complete background, insurance and vehicle checks with Uber itself. Taxi and livery drivers, on the other hand, have to be certified through the city. Requirements for city certification include a background check, a driving history check, a medical history check, an in-person vehicle inspection, proof of commercial insurance and a written and verbal test.

The city manager’s suggested changes have been posted for the public and will be brought before City Council again in March.

While presenting his plan to the transportation and infrastructure committee, city manager Troy Schulte said the reason the city regulates taxis and now TNCs like Uber is “because it is a public safety issue.”

All this is part of a larger debate about the “sharing economy,” which refers to the ever-growing list of disruptive companies like Uber, Airbnb and TaskRabbit that give people autonomy over when and how much they work.

But now, people are asking: Is this system working for the economy? Are these workers getting a good deal?

This January, Uber released a report claiming that its drivers make as much as or more than traditional taxi drivers. But the report didn’t include data about how much it costs for drivers to operate and maintain their cars, and that caused people to question the report’s validity.

Bill George is the president of Kansas City Transportation Group, which operates Yellow Cab, 1010 Taxi and the ride app zTrip. He says former Uber drivers have been joining his company because they are dissatisfied with the amount of money they make as Uber drivers.

Since Uber uses surge pricing and drivers receive a pre-set percentage of the fare, Uber drivers don’t always know how much they are going to make per hour. This and recent fare reductions have led George to think that there’s no way to make a living driving for Uber.

“I think, in summary, it is not a stable source of income,” he said. “And what we’ve found is drivers who attempt to do it full-time find that they can’t make full-time living doing it. It has become a part-time.”

For George, insurance is also a huge issue. He’s worried that more and more drivers will end up like McCarthy and that innocent bystanders will be hurt.

He’s worried because drivers are technically allowed to drive for both Uber and Lyft at the same time. He presented a scenario: A person has two phones open on his or her dashboard — one running Uber and one running Lyft. If this person hits a pedestrian when they are between passengers, which company’s insurance would cover the cost of the accident? Neither Uber nor Lyft prohibits its drivers from using both platforms at the same time.

Uber and Lyft have nearly identical insurance policies. Both give their drivers a $1 million commercial insurance policy and a lesser “contingent insurance” policy when they have the app turned on but no passengers in the car.

James River Insurance Company is Uber’s insurer. It’s what’s known as a “surplus lines” insurance provider, meaning it’s not licensed or admitted in the state of Missouri, but is allowed to do business here. Surplus lines insurers often carry more risks than standard insurance providers because they are not regulated by the state. According to Claims Journal, surplus lines insurance is often used to insure newer, riskier ventures that standard insurers wouldn’t want to take on before they are well-established — ventures like Uber and other ride-hailing services.

According to a fall 2014 statement by the National Association of Insurance Commissioners, based in Kansas City, “The risks associated with participating in ride-sharing services are not yet completely understood and do not fit neatly into insurers’ current risk pooling models, raising numerous insurance-related questions. Specifically, there is increasing concern over the potential gaps in insurance coverage in the unfortunate event of an accident or injury.” The NAIC will be taking a deeper look into sharing economy issues in a conference call this March.

The NAIC, as well as the Kansas Insurance Department, have issued consumer alerts warning passengers and people who are considering using their own vehicles for ridesharing that there may be gaps in the insurance coverage.

Even after his ordeal with Uber, McCarthy said he’s not against ride-hailing services. In fact, he thinks they can be very useful.

But, he said, he thinks people who sign up to drive for Uber should seriously consider the potential risks they’re getting into.

“This wasn’t my first foray into independent contracting. I knew what the inherent risks were,” he said. “But I didn’t anticipate a situation where I got smashed by another Uber driver, and the company dragged their feet even when the evidence showed that I was on the receiving end of reckless driving.”

Meanwhile, McCarthy is no longer driving for Uber. In fact, he’s started a new full-time job at a tech company.

“That was the last passenger I’ll ever pick up for Uber,” he said.

New (unregulated?) ways to get a ride

One thought on “Is driving for – and riding with – Uber worth it?”