Discussion aims to put words into action on mental health 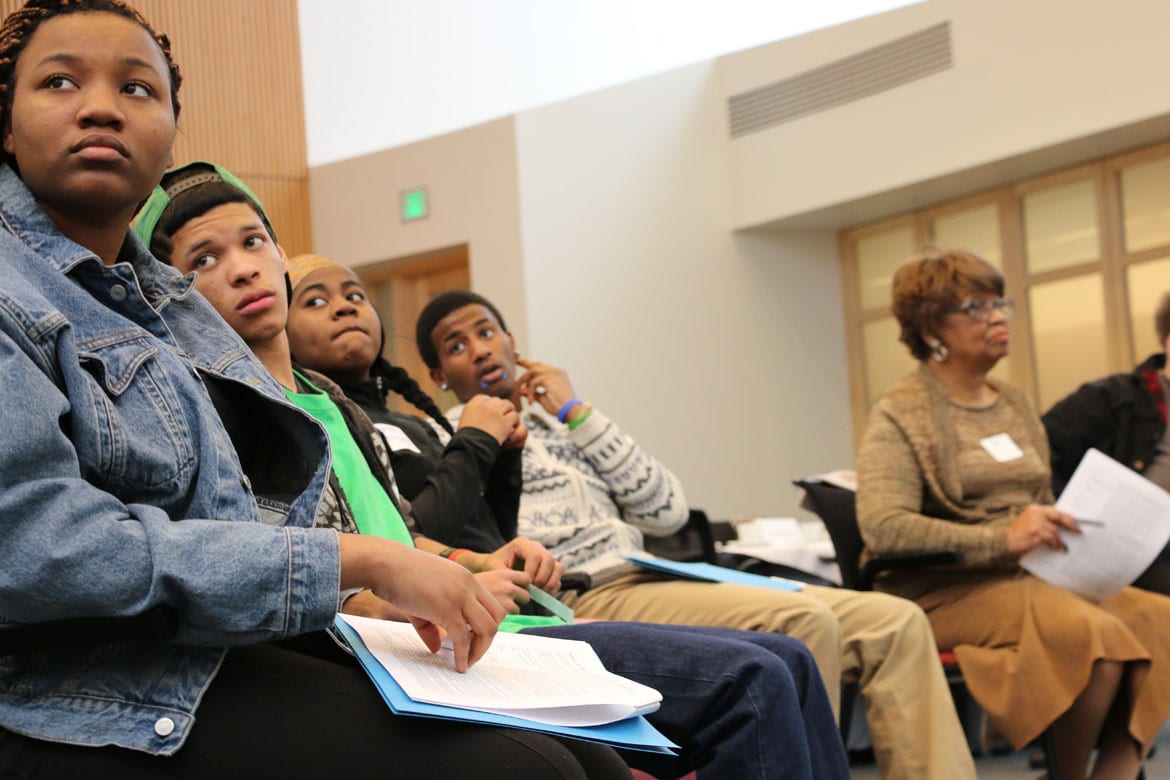 There are, no doubt, a million things teens would rather do on a beautiful weekend morning than talk about mental health with a bunch of adults.

Nevertheless, students like 16-year-old Jarel Wilson were among about 100 participants who took part in a discussion Saturday at the Kauffman Foundation Conference Center in Kansas City, Mo.

As a follow-up to a larger forum held last year, attendees developed action steps for improving mental health services and awareness in the metropolitan area during the next year and a half — with a heavy focus on teens and young adults.

“I think something has got to change,” said Wilson, who attends an art vocational school in the city. “Everything can’t stay the same for 18 months.”

Among the action items suggested were:

Alexis Frazier, 15, a freshman at the Cristo Rey Catholic high school in Kansas City, Mo., said one need is to publicize to youths all the resources that already exist to help them.

One key goal for the immediate future is to hire a leader for each action team organized around the five sets of outcomes and strategies that emerged from the initial forum last fall, said Jennifer Wilding, project director for Creating Community Solutions-Kansas City.

Creating Community Solutions is an initiative from the Obama administration, which launched its National Dialogue on Mental Health in the wake of the December 2012 school shooting in Newtown, Conn.

Kansas City was one of 10 communities across the country to hold a large-scale event, which drew about 300 participants to a day-long discussion Sept. 21 at a hotel in downtown Kansas City, Mo. U.S. Health and Human Services Secretary Kathleen Sebelius spoke at the Kansas City event.

Supporters of the metropolitan-wide initiative include Mark Holland and Sly James, the mayors of Kansas City, Kan., and Kansas City, Mo., respectively. Both mayors made comments Saturday.

James lauded attendees for doing the heavy lifting in devising action steps following the discussion last fall. “It is easy to get people to talk,” James said. “It’s hard to get people to work.”

He expressed confidence that “the final outcome of all of your efforts will result in a community that is better educated, better equipped to address mental health issues.”

Mark Miller participated on Saturday as vice president of behavioral health at Swope Health Services, which has clinics for low-income residents throughout the metropolitan area. He is also a member of the planning team for the local Creating Community Solutions effort.

One interesting idea he heard, Miller said, was to perhaps use performances by school drama clubs to help improve public awareness and understanding of mental health issues. The discussion, he said, came up in the context of using existing resources in an innovative way.

Miller said he was also struck by the lack of carping about a lack of funding for mental health services, something that often dominates discussions among mental health professionals.

Wilding said she was excited about the potential to collaborate with officials in the other cities that hosted the community discussions.

As for Wilson, the art student, he said the discussion was OK. “It was cool,” he said. “I got to put in a couple words.”