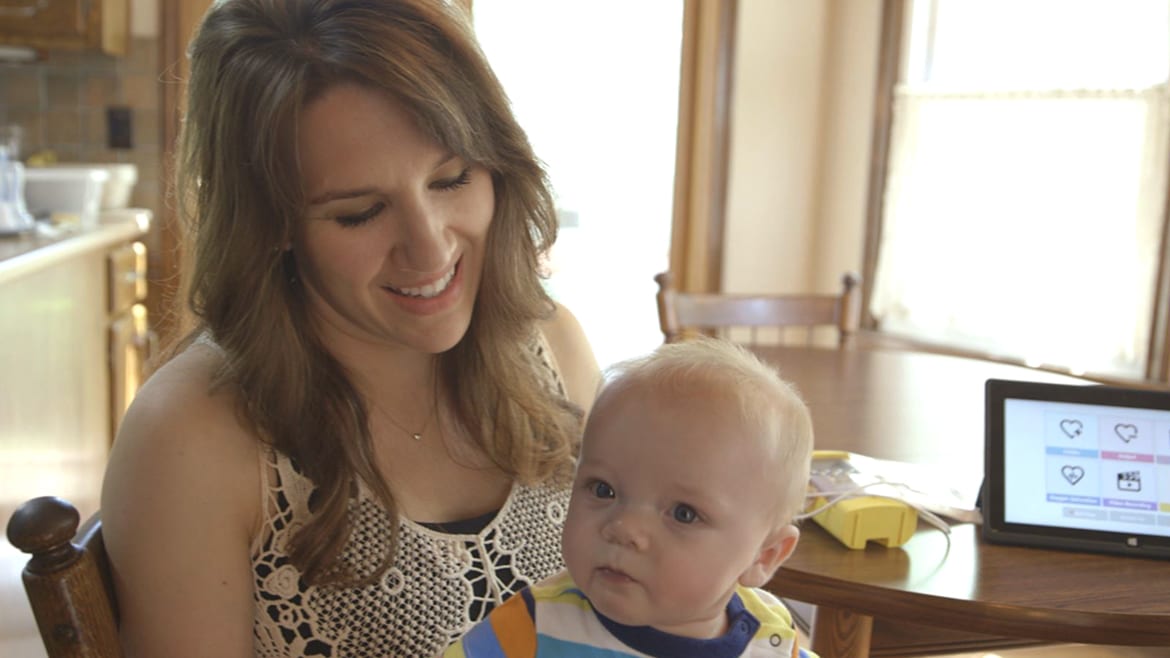 About 3,000 infants are born each year with single-ventricle heart defects.

While that’s a relatively small number, for the newborns’ families the diagnosis can be devastating, says Dr. Girish Shirali, co-director of the Ward Family Heart Center at Children’s Mercy Hospital in Kansas City.

“It’s very difficult for families, because nobody expects this. So it kind of comes like a bolt from the blue,” he says.

These infants have underdeveloped lower heart chambers, or chambers that are missing a valve. They typically need three major heart surgeries to redirect blood circulation, including one within a few days of birth.

The period between that surgery and the second one a few months later is perilous. As many as one in five newborns with the diagnosis die in the first few months of life, and their condition needs to be carefully tracked and recorded for danger signs.

During that critical time, it’s usually up to the parents to closely track their babies’ oxygen saturation levels and weight at home.

“One of our concerns has been just the amount of stress that that puts on the families, because the responsibility is kind of now shifted on to them,” Shirali says.

In the past, when parents of newborns with single-ventricle heart defects left the hospital, they usually brought home both their baby and a big, clunky three-ring binder.

But at an American Heart Association conference today in Chicago, Shirali will introduce a tablet-based app that could make a big difference in monitoring and treating these conditions.

The app, created by Children’s Mercy researchers, is called the Cardiac High-Acuity Monitoring Program, or CHAMP. It connects via Bluetooth to oxygen meters and sends the oxygen saturation data along with weight and feeding information to the infant’s pediatric team.

“So then situations that we consider high risk, for example, the coordinator’s pager might go off instantly, as soon as they confirm the saturation level is too low,” Shirali says.

If the team sees warning signs in the data, it may ask the parents to bring the infant in for emergency treatment.

The app can also send videos showing how an infant is breathing and interacting.

“If they’re feeling good, they lock eyes with their parents, and they start to smile and coo and gurgle and interact, which is just great,” Shirali says. “And if they’re not feeling that good, they get a little furrow between their eyes, and they don’t feel like smiling. They’re very straightforward and simple, these babies.”

Shirali says that it’s hard for now to say what effect the app might have on mortality rates. A test group of 18 families used the device along with other new interventions, and the outcomes were promising.

“We have not lost any of those babies,” he says. “And that’s been really exciting for us, because, on average, out of 18, we would expect to lose two or four by this time.”

Shirali says he’s also excited about other potential uses for the technology, including monitoring of blood pressure, diabetes and asthma. And not just for newborns, but for adults as well.

The app was developed in collaboration with the Claire Giannini Fund and Heart to Heart Network, Inc. The fund has financed the distribution of 200 units nationally.