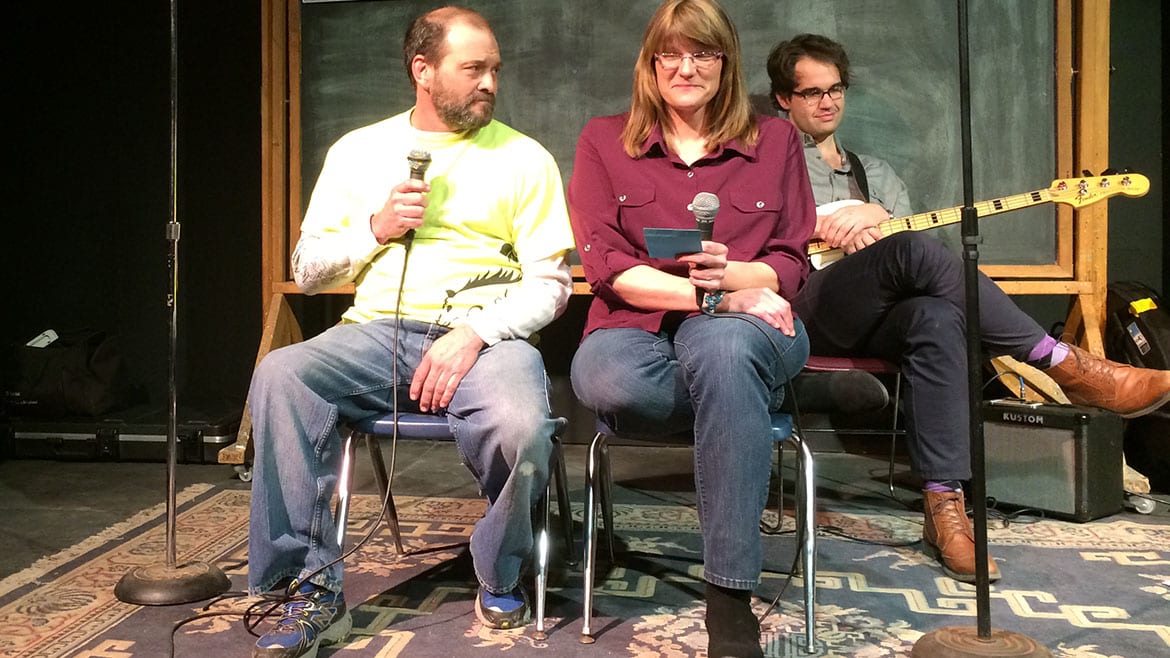 Scott Foley (left) and Chris Long were among the parents of children with autism who took part in "An Evening With The Rents," a comedy fundraiser for a camp catering to autistic kids. (Photo: Alex Smith / Heartland Health Monitor)
Share this story

Parenting is a tough job for anyone, but raising children with autism, who often have behavioral or communication problems, can be especially demanding.

Research has shown that parents of children with autism are at increased risk of depression.

But in Kansas City, some of these mothers and fathers are finding a measure of respite, and sympathetic ears, through comedy.

On a recent Thursday night, a handful of parents with kids who have autism took a break from parenting and faced down their latest challenge: stage fright.

It was the final rehearsal before an event they put on called “An Evening With The Rents” — a fundraiser for Camp Encourage, a sleepover camp for kids with autism.

Speech therapist Keenan Stump, who launched the event last year, says that, working with the kids in their homes, he discovered that a sense of humor played a big part in their parents’ daily lives. But the jokes and stories rarely found their way outside the home.

From stories to comedy routines

After being recruited by Stump, the parent-comedians spent months talking through their stories and turning them into routines with the help of comedy coach Brady Goodman. A lot of the material that came out of these sessions described togetherness and family. But many jokes turned out to be not-so-family-friendly, hitting on subjects like sex and alcohol.

Parent Rosie O’Laughlin rehearsed her routine about how her son accidentally picked up some extra vocabulary.

“For a while, ‘Ring Around the Rosie’ was Carson’s favorite song,” O’Laughlin says. “He would conveniently omit the ‘h’ in ‘ashes’: ‘Asses, asses!’ And it was his favorite part to sing. Like, they never fell down!”

Jennifer Gray, mother of 10-year-old Mason, recalled that it didn’t take long for parents to lose their storytelling inhibitions.

“When you get together and you begin telling these stories and you realize that there’s a commonality, then all of the sudden, it just begins to come pouring out,” she says.

Though parents of autistic children share much in common, there are also some big disagreements over issues like vaccinations and approaches to treatment. And even over “An Evening With The Rents” itself.

While organizer Keenan Stump hoped the event would bring the community together, he admitted he heard from plenty of critics – parents, teachers, even adults with autism – all wondering: Were these parents making fun of their kids?

Even some of the performers were concerned.

“I was a little hesitant at first, truth be told,” Gray says. “I was wanting to be very sensitive to Mason. While he’s only 10 and severely affected and nonverbal, I wanted to be certain that represented our family.”

“What we kept coming back to was it’s not the autism that’s funny,” she says. “It’s our response to bridging the gap between the way that he navigates the world and the way we navigate the world.”

When the parent-comedians took turns in the spotlight, many seemed somewhat overwhelmed by the audience of hundreds that turned out. But their months of practice paid off, eliciting roars from the crowd.

“Help me out, Facebook friends,” Olivia Cytrynowicz cried. “Is swallowing a Hungry Hungry Hippos marble reason enough to go to the ER? And can I get an ETA on getting that marble back? It’s our favorite game!”

Jennifer Gray ruminated: “This life with autism has transformed me from the mother who would not let us leave the house until all four of our outfits were perfectly coordinated to the mom who is just happy no one is naked.”

And Jenny Whitty channeled Joan Rivers: “So she asks my son, ‘Simon, did you hurt your eye?’ And he says, ‘Yes.’ And she says, ‘Simon, did your daddy hit you?’ And he says, ‘Yes.’ Now, you have to understand, he didn’t have ‘no’ yet. That’s about the only word that boy said was ‘yes,’ ‘hi’ and ‘dad.’ And so child services gave us a call and, of course, at this time I’m not too worried. I’m not the one that’s been reported to DSS (the Department of Social Services). It’s my husband.”

Beyond the jokes, this is serious business. Parent and comedian Kris Ray hoped that “An Evening With The Rents” will inspire others in the autism community, including its critics.

“To talk to other people that are going through the same experience and understand what you’re going through and then to find the laughter in it,” Ray says. “It’s something that I think, hopefully, other parents will experience as well and that they’ll take that message with them and try to instill that in their everyday lives.”