An Exchange of a Lifetime

Amid the riots unleashed following the 1968 assassination of Martin Luther King Jr., a spark of hope quietly ignited in the center of the country.

That flicker was right here, in Kansas City, where Catholic leaders launched an experiment that confronted race head-on by bringing black and white students literally face to face through a student exchange program.

The participating schools were the all-black Annunciation at Linwood and Benton boulevards, and the all-white St. Francis Xavier at 52nd Street and Troost Avenue. The number of participants is unclear.

The unheralded program lasted only for the 1968-69 school year. Yet that was long enough to positively influence careers and marriages that came along later — and to leave indelible memories of the racism the students saw and of the interracial friendships they developed during that time.

Some of the participants shared those stories recently during a mini-reunion in Kansas City, wondering whether an examination of the program could provide hope and inspiration in this era of political and racial polarization.

Kansas City and the King Assassination: A Special Documentary and Panel Discussion

Through a unique broadcast partnership, Kansas City Public Television and 41 Action News are producing a new documentary that chronicles the violence and destruction that occurred in our city following the shooting death of Martin Luther King Jr.

A screening for the documentary, “68: Marking 50 Years of Kansas City’s Deadly Riot” will be 6 p.m. on Monday, March 26 at the Plaza Branch of the Kansas City Public Library, 4801 Main Street, Kansas City, Missouri.

Following the 30-minute screening, KCPT’s Nick Haines will take audience questions during a panel discussion examining the lessons learned from the the ’68 riot and  how it informs issues today.

“We are examples of white people and black people coming together,” said Debora Demeter, formerly Barrett, the chief organizer of the reunion.

Many Kansas Citians will likely be unsurprised that one of the organizers of the exchange was Alvin Brooks, a longtime community activist and civil rights advocate. His daughter, Carrie, who was 13 at the time, was one of the exchange students.

The exchange program was part of a broader effort by the Kansas City-St. Joseph Diocese to address injustices through social action committees, Alvin Brooks said.

These committees tried to help quell the violence that followed the King assassination. Brooks said committee members chose to attack racism by changing attitudes among some of the city’s youngest and most impressionable residents — sixth- through eighth-grade students in the Catholic school system.

The students would leave their comfortable surroundings and immerse themselves as minorities in unfamiliar academic and cultural environments. If friendships grew from this exposure, the organizers theorized, the approach could help erase color-coded barriers.

Success was far from guaranteed, Brooks said. After all, he noted, this was still such a racially raw time that white worshippers would rush to the front of the church during Communion to avoid drinking from the cup after black parishioners.

True to form, at one of these difficult meetings, Brooks’ outspoken daughter silenced the room with a simple question: Why should black students participate when so many white parents were refusing?

That daughter is now Carrie Brooks Brown, who lives in Phoenix and owns a management consulting business.

She believes her father is being modest when crediting other parents for devising the exchange program. The drive for racial integration was a constant in the Brooks household, which included mother, Carol, and six kids. In the early 1960s, the whole family would enter “white-only” businesses, usually restaurants, only to be refused service.

Though she and her siblings sometimes grew tired of such a public role, Brown said it was that childhood experience that gave her the confidence to thrive as an adult in jobs where she was the only black employee. She also raised her kids to be colorblind, and a daughter is in an interracial marriage. 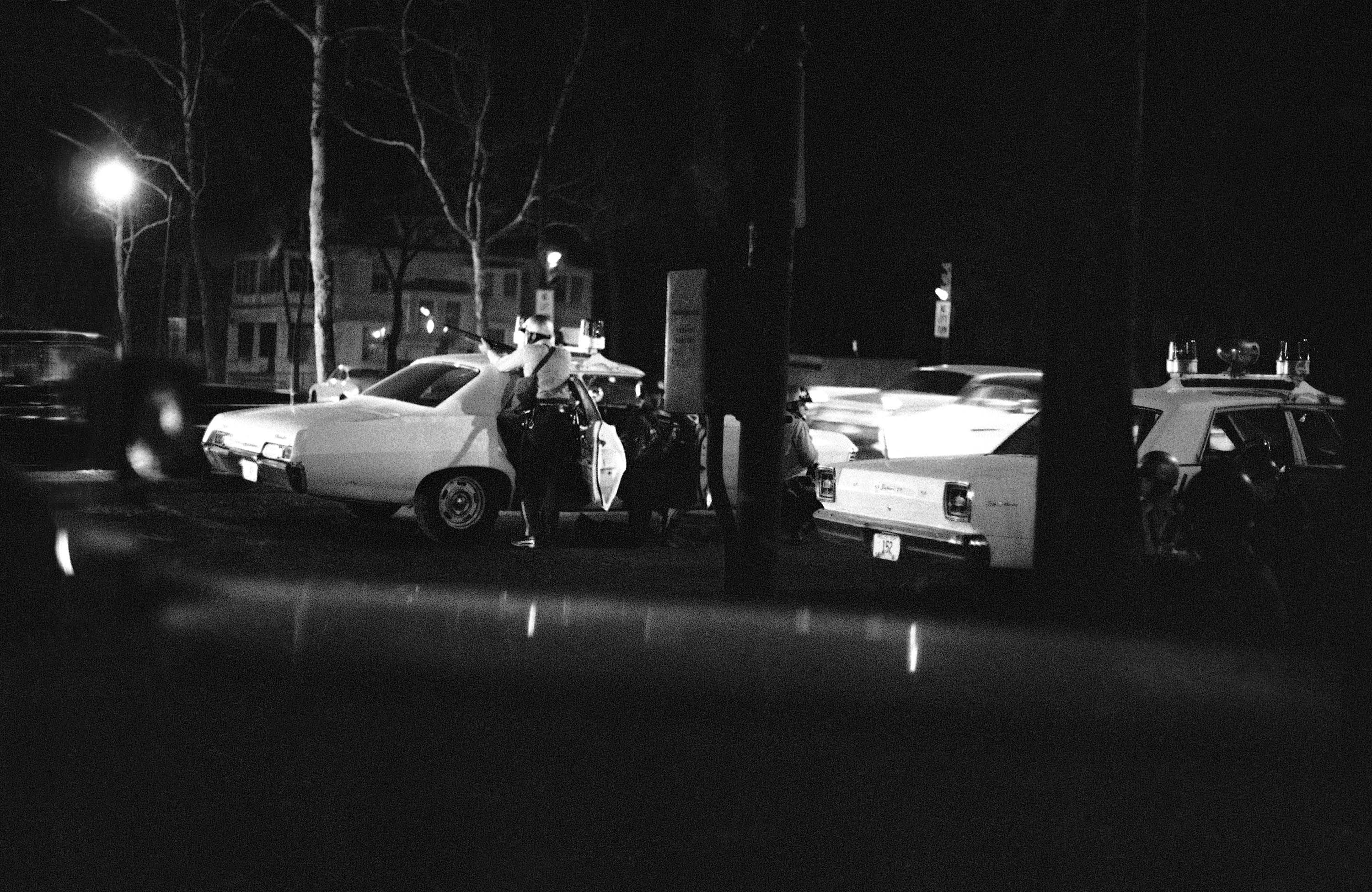 As for Demeter, the reunion organizer, she grew up associating whites with suppression. Demeter’s parents volunteered her for the exchange, but she vowed that the school year at St. Francis would fail to change her views.

At St. Francis, she joined her new white friends at their homes for dinners and sleepovers.

However, the mixing was not without controversy. She remembers the taunts of her neighbors as she and her new white friend walked through Demeter’s neighborhood. The two ran after neighborhood children threw soda cans.

“I’m still just sorting out the effect it had on me,” — Mike Damico, exchange student

High school brought more interracial experiences for some of the exchange students as they attended Catholic Bishop Hogan High School, at 1221 E. Meyer Blvd. It was a time when the traditionally all-white school was becoming more racially diverse.

Demeter found her place as a performer and, eventually, producer of a Black Awareness variety show featuring Hogan students. The traveling troupe danced, sang and highlighted poetry to enlighten others about the ideals of the Black Power movement.

While performing at Shawnee Mission East High School during the early 1970s, this young woman who swore the program would not change her racial views agreed to go out with a white male student from East.

But on the way home, her companion had to screech to a halt to avoid a collision with a car that had blocked their path. The three black males in that car approached Demeter and her companion, and insisted that she come with them instead of riding with her white date.

She agreed to, but not because she wanted to give in.

“I was afraid of what these men might do to (her date) if I didn’t go with them,” Demeter said. The men dropped her safely at home.

Yet an even more consequential interracial experience came at the department store where Demeter worked as a teen. It was there that she met a white man named Don, who eventually became her husband.

She thought this was the ultimate example of how St. Francis had eradicated her prejudices, but her husband reminded her of the biases she continued to harbor as a young adult. Demeter agreed, but said her evolution has taught her “not to define myself as being black, but as being Debora. I see everyone as part of the human race.”

Mike Damico and Don Ritchie provided their insights as white participants in the exchange.

Damico’s father eagerly enrolled him in the program, and he wishes he would have talked more to his father about that experience before his dad died.

He only spent part of the year at Annunciation before a move took him elsewhere, but even that brief interaction was powerful.

“I’m still just sorting out the effect it had on me,” Damico said. “I think it’s taken us this long to understand what it all meant. It’s made me rethink some of the things we did — and I feel lucky to have gone through it.”

He credited his experience at Annunciation with helping him later in life as a labor organizer, where he advocated for fair hiring practices and other rights. He readily joined pickets and protests for fellow electrical workers.

Ritchie recalled that he was the only white student remaining at Annunciation at the end of the school year, as other parents nervously pulled their children during that time of racial tension. (Several black students finished the school year at St. Francis.)

“I have a picture of myself in my eighth-grade graduating class,” Ritchie said. “I’m the only Caucasian, and it’s my favorite picture.”

He did remember one racial altercation before a football game, when a black player from the opposing team demanded a dollar from Ritchie. “I ain’t got no money,” Ritchie mocked, prompting the confronter to knock him out briefly with a smack to the back of the head.

Conversely, the exchange program also exposed Ritchie to racism for the first time.

When hanging out with his black new friends, the group sometimes entered stores and restaurants and were turned away and denied service. Those experiences made a huge impact on Ritchie, giving him more empathy for those who experience racism.

What about the kids who remained at their home schools to greet the newcomers?

One of those students was Ray Barrett, Debora’s younger brother, who was an 11-year-old sixth-grader at the time.

Frankly, Barrett said, the whites initially seemed scared of their new black schoolmates. But within a few days, he recalled, they broke the ice at recess and were soon riding bikes and playing pickup games after school.

Barrett remembered the striking difference between the “watch your back” mentality of blacks and the easygoingness of the whites. “They didn’t seem to be concerned about everyday living.”

His experience with the exchange prepared him for Bishop Hogan, which was predominantly white during his first two years there. It was there that he met Denise Carriere, a biracial student, whom he ultimately married.

She knows the profound impact the exchange had on her husband. “I’ve been hearing about this practically all my life,” she said.

Brooks, the civil rights icon, said he and other blacks had hoped that Barack Obama’s presidency would bridge racial divides. Yet today’s divisiveness, he said, takes him back to those unsettling days when a band of parents embarked on a small experiment aimed at washing away prejudices among their kids.

“I think the stage has been set for us to repeat what we went through in the 1960s,” he said. “It’s as if we’ve made one step forward and three steps backward.”

Correction: The story has been revised to accurately reflect Demeter’s experience in walking through her neighborhood with a white friend.

— Coleman-Topi is a freelance writer who lives in Blue Springs, Missouri. Follow @FlatlandKC for your local news and issues.