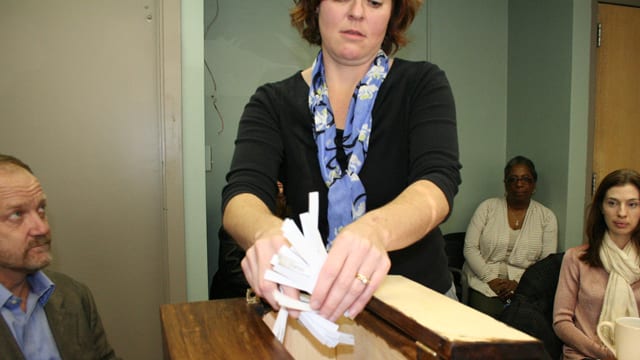 Although they joke about shutting the windows and blinds in the small conference room at Académie Lafayette’s K–2 campus, the dozen administrators, board members and witnesses at the annual lottery for admission take confidentiality very seriously.

The lottery system started five years ago when Académie Lafayette began receiving more applications than they had space for students.

“It’s bittersweet- It’s unpleasant- Those would be two adjectives I would use,” said Heather Royce, Académie Lafayette’s K–2 principal.

Of this year’s 136 applicants for the 2014 kindergarten class, there is space for 46. This is the space available after siblings of current students, any children of staff and “re-instated students”, or students who were picked during the previous year’s lottery, but whose parents decided to delay kindergarten for another year.

Admission at Académie Lafayette primarily happens in kindergarten because of its French-immersion curriculum.

“We’ve consistently had about 175 applications received during the open application period for the last three years,” said Katie Hendrickson, director of communications and admissions at Académie Lafayette. “This year we’ve received 30 more applications, so the interest in the school is growing and has grown steadily.”

Enrollment in charter schools in Kansas City and St. Louis has grown in the last decade according to the Missouri Department of Elementary & Secondary Education (DESE).

Charter schools were first permitted in Kansas City and St. Louis in 1998 to give parents alternative school options because the public schools in both cities were struggling.

Académie Lafayette was founded in 1999 as the first charter school in Missouri.

DESE Communications Coordinator Sarah Potter said it’s not yet clear how this legislation might impact the number of charter schools in the state.

“I’m not sure that we’re going to see more charter schools,” Potter said. “I think there is hesitancy with sponsors because there is more accountability.”

This increased accountability includes new standards for reporting academic performance and transparency of school finances to the state.

Académie Lafayette, which is sponsored by the University of Central Missouri, is looking at possible expansions.

“We are full already in this building,” Royce said. “We opened this building in August, really at capacity with six kindergartens, six first grades and six second grades.”

Letters to families letting them know whether or not they have been selected in the lottery will be mailed March 15.

“I ask families to have a plan B, but I don’t know exactly where they go [if they don’t get in],” Hendrickson said. “This is a painful and sad day, because we know that we have the chance to really accept students and help them go a certain direction with their education, and it’s really sad to see this whole other group of kids that we’ll never meet.”