Is an aqueduct a practical answer to the water crisis in western Kansas? 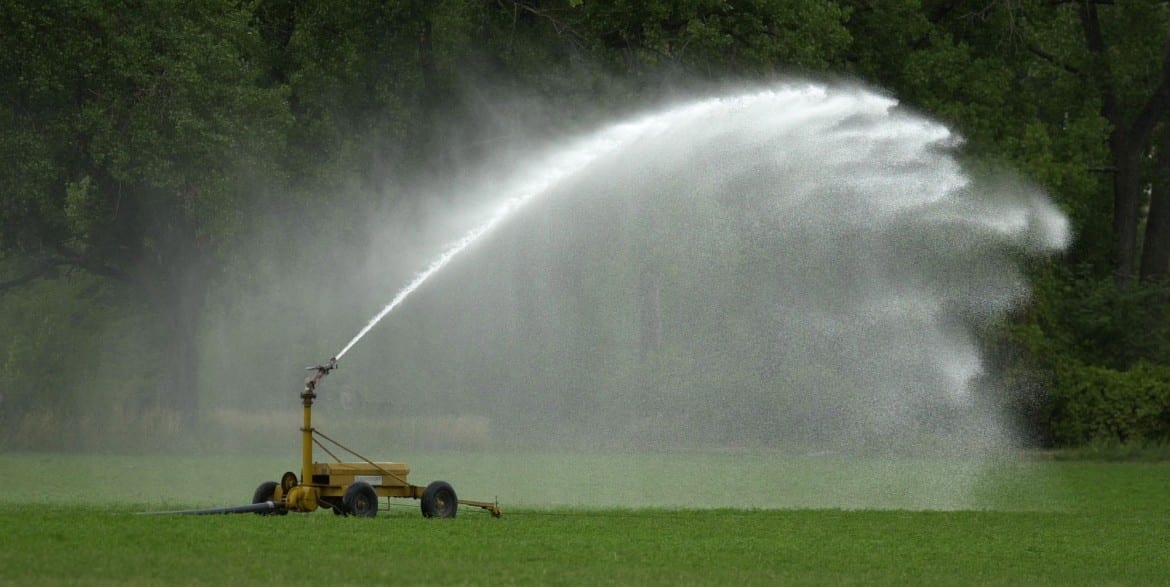 In this Aug. 28, 2003 AP file photo, a sprinkler sprays water onto a hay field near Hoxie, Kan. In western Kansas, farm irrigation is depleting the underground Ogallala Aquifer, while in some counties, irrigation has been forced to halt entirely. (AP Photo/Charlie Riedel, File)
Share this story

A lot has changed in the three decades since the idea of building an aqueduct from the Missouri River to western Kansas was first studied and shelved. For one thing, the water shortages that were mere projections then are now imminent. That reality has prompted state officials to dust off the study and re-examine the aqueduct idea.

Western Kansas is heavily dependent on the Ogallala Aquifer. But since 1950, that ancient supply of underground water has been rapidly depleted by irrigation. That irrigation produces corn, which is fed to livestock to support the beef and, more recently, dairy industries, which are the foundation of the western Kansas economy. But water levels have dropped so low in parts of more than 30 counties that irrigation pumps can no longer be used there. That’s why rivers in western Kansas are little more than dry stream beds.

Mark Rude is tracking the depletion of the aquifer for a groundwater management district in the heart of the affected area.

In other words, 91 percent of the water currently being pumped would have to be shut off just to keep the aquifer from declining any more. But if the water doesn’t come from the aquifer, where could it come from? The 2011 flooding on the Missouri River gave Rude and others an idea about how to answer that question. While devastating to those along the river, the flood looked like an opportunity.

“Folks who realize the deep value of water in western Kansas looked at that and go, ‘Wow, if we only had a couple days of that flow we could fill the aquifer, and we’d all be happy,’” Rude says.

Rude looked into that idea, and rediscovered the 1982 study proposing a system to capture excess water from the Missouri River and store it in a huge, new lake near White Cloud in the northeastern corner of the state. It would then be pumped uphill through an aqueduct to western Kansas. There it would be stored in another new lake — by far the largest in the state — for distribution.

The cost was estimated at $1,000 per acre-foot of water delivered. With that price tag, the concept was dead on arrival. But recently, the Kansas Water Office told the committee charged with updating the old study that the cost is now closer to $500 per acre-foot. The savings are due to lower interest rates. Cost is a concern for committee member Judy Wegener-Stevens, but it’s not the only reason she’s opposed to the project.

“I don’t feel an aqueduct should be built,” Wegener-Stevens says. “I feel that people in western Kansas have been pumping water unconditionally, without any rules, for 40 years, and they have not used their resource very well.”

Wegener-Stevens, who lives in White Cloud, said the nearby Iowa Tribe of Kansas and Nebraska would fight a proposed aqueduct. They have rights to water in the Missouri River and are working to quantify those rights. There might also be objections from other states, even though the idea is to take only “excess” water. Throw in anticipated battles over property rights and environmental concerns, and some committee members say the aqueduct still doesn’t appear realistic.

But committee member Clay Scott isn’t willing to give up on the idea. Three generations of his family raise cattle and grow irrigated corn and wheat near Ulysses, in southwest Kansas. Scott points to an Arizona aqueduct called the Central Arizona Project as proof that a Kansas aqueduct is feasible. He says a reliable source of water is vital to the future of his family’s farm.

“I’ve got three boys that are looking to maybe come back to the farm, but, you know, it takes a lot of acres in western Kansas to support a family — especially coming through these last three years of drought,” Scott says. “It’s a challenge to tell your boys that there’s an opportunity. There’s a future for you here.”

Scott and other members of the advisory committee say the first priority should be some sort of compact with other states and Indian tribes to secure rights to Missouri River water. Then they can worry about all the other obstacles to the project. Earl Lewis, the assistant director of the Kansas Water Office, agrees with that approach.

“Moving forward and investing considerable time and funds into pursuing a project that doesn’t have the legal security of a water right or some kind of compact doesn’t make a lot of sense,” Lewis says.

Even if the Missouri River doesn’t pan out as a water source, Lewis says there may be other options. State law could be changed to make it easier to transfer surplus water to western Kansas from other parts of the state. And Kansas may be able to get some financial help from Colorado, in exchange for providing water to ease shortages on the Front Range. But it will be up to others to explore those options and others. The advisory committee’s charge was solely to update the aqueduct study and make recommendations. Those recommendations are due by the end of January.

Bryan Thompson is a reporter for Kansas Public Radio in Lawrence, Kan., a partner in the Heartland Health Monitor team.

Testing the Water in Our Watershed