The ABCs of Port KC 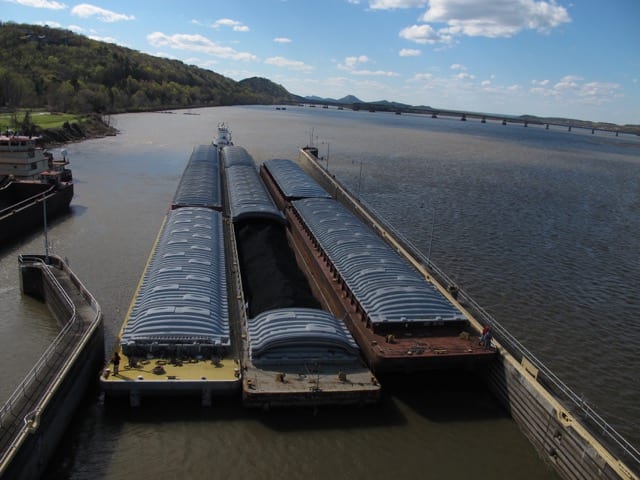 On the Arkansas River, a towboat pushes eight barges through a lock and dam underneath the Big Dam Bridge outside of Little Rock, Arkansas. There are 18 locks on the river, the Missouri River has zero. (Photo: Suzanne Hogan | KCUR)
Share this story

During a conversation that aired today on KCUR 89.3, McGraw told Hogan, “Historically, the port has been just about the river and a big freight facility down in southern Kansas City. But during the period that we were doing our reporting, the city actually came to the port authority and asked them to do some abatements on downtown properties.”

You can hear their conversation here:

Local activist Jan Parks, who represents the school district in the city, told the reporters: “I thought the port authority was still being the port authority, taking care of the port of KC, which I had always thought was its main purpose.”

McGraw explains that Parks’ concern was about tax abatements and its impact on school quality and maintenance. Her concern, explains McGraw, is that the school district has more than $200 million in deferred maintenance, it operates off property taxes and “the more abatements we have … the less money the school’s going to have to do that maintenance that’s waiting to be done.”

In Tuesday’s story, Hogan explored the economics behind the vision for Missouri River navigation; and on Wednesday, McGraw investigated the impact of Port KC’s tax abatement and development strategies on public infrastructure and taxpayer dollars.

Meanwhile, among other areas of interest besides tax abatements, Port KC does have a port to manage.

The agency is in the midst of reopening the city’s ancient Missouri River barge terminal, which hadn’t seen significant freight traffic in decades.

Port KC president Michael Collins said that this year alone the port has handled 20,000 tons of cargo, even though the normal navigation season on the river has just begun.

Despite doubts by his predecessors about whether barge traffic on the Missouri can be reignited, Collins makes it clear that Port KC is dedicated to that mission.

Port KC has leased the terminal to Kaw Valley Companies at a minimum rate of $30,000 a year for the first year, going up during the seven-year lease to at least $48,700.

The city, which owns the old terminal and subleases it to Port KC, will get about $6,500 from the deal this year, or about a sixth of the minimum total revenue Port KC will collect on port operations.

Port KC is underwriting improvements at the barge terminal at an estimated cost of more than $25 million. That includes at least $3.1 million to extend railroad siding into the terminal.

Port KC also has its hand in light rail. It joined the city to petition for a taxing district downtown to pay for it. Some of the buildings owned by Port KC are on or close to the light rail starter line.

Collins also serves on the light rail board.

Port KC is not only a tax abater, but also a tax creator.

Under recent legislative changes, Missouri port authorities can create new taxing districts of their own. And that’s just what Port KC did a few months ago in two new districts along the Missouri River.

The 1 percent sales and use tax from one district, which at this point has no taxpayers, will be used to beautify and maintain Berkley Riverfront Park. Port KC is also developing multi-family housing and mixed-use retail districts near the park.

Port KC is not only a tax abater, but also a tax creator.

Taxes collected in the other district – where the Isle of Capris is the only current taxpayer – will be used to improve nearby property and interchanges.

In creating one of the Berkley districts, Port KC carved out a tax-free zone for the Veolia energy plant, which supplies steam and green energy to downtown buildings.

Collins said they were excluded because the taxes could be passed on to the plant’s downtown customers, who would not directly benefit from the tax-funded improvements.

If all that’s not enough, Port KC also:

· Is studying local food supplies as part of an effort to create a local “food hub.”

· Is continuing to develop the CenterPoint Intermodal Center on the site of the former Richards-Gebaur Air Force Base in south Kansas City.

This story is part of a reporting collaboration between KCUR and KCPT’s Hale Center for Journalism exploring the economics behind Missouri River navigation and Port KC development. See the first and second stories in the series, from KCUR’s Suzanne Hogan and KCPT’s Mike McGraw here and here on Flatland.

A Brief History of the Missouri River's Route