A Quick, Clickable Roundup Of Health News From Our Region For The Second Week Of October 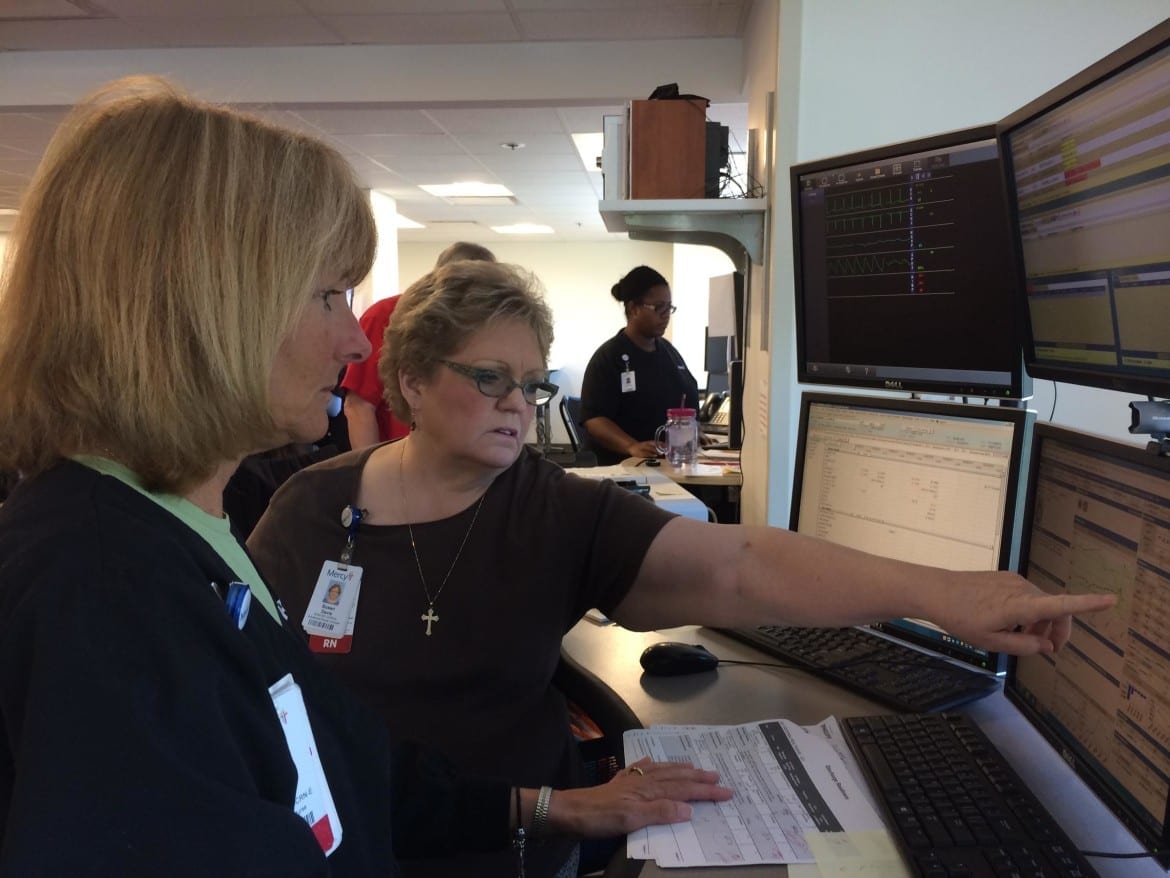 Nurses Patricia Wegener, from left, and Susan Davis at Mercy Hospital can monitor the condition of a patient who is miles away via the hospital's technology. (Photo: Alex Smith | Heartland Health Monitor)
Share this story

Say you’re a Midwestern farmer in a hospital bed, recovering from surgery or a major illness. It’s time for the nurse’s check-in, but there’s no knock on the door. At Mercy Hospital in St. Louis, a camera attached to the wall over the foot of the bed whirls around, as a video monitor next to the camera lights up to show a smiling face with a headset on.

“Good afternoon, this is Jeff with SafeWatch,” the smiling face says. “Just doing my afternoon rounds.”

It’s a little hard to shake the Jetsons vibe in this telemedicine training exercise, but this kind of health care isn’t just futuristic; it’s happening now and expanding. On Oct. 6, Mercy Hospital will open its new telemedicine mothership. The idea isn’t so much to keep closer track of patients at the St. Louis hospital as to treat thousands of patients spread across five states.

The new facility will offer an increasing number of patients in remote parts of the rural Midwest and South the sort of detailed health monitoring offered at large, well-staffed hospitals in cities and suburbs, says Tom Hale, the executive medical director of Mercy Virtual.

He says the quality of telemedicine can be high, and it’s cheaper than in-person care. Hale and his team now largely provide care for patients in rural areas, but the use of their system may soon extend quickly to a different group of patients: baby boomers anywhere who want to stay in their homes instead of moving to a nursing facility when their need for health care increases.

Industry analyst Sarah Turk of IBISWorld says that expanding population could propel telemedicine to a $3.5 billion industry by 2020. Right now, Medicare only covers the use of telemedicine in rural or medically underserved areas, and only when video conferencing is used.

With its new facility, Mercy Hospital can monitor nearly 7,500 acute-care beds in five states, and the plan is to keep expanding.

A new statistical summary by the Kansas Department of Health and Environment shows progress in reducing a long-standing health disparity between black and white Kansans: the death rate for babies in their first year of life.

KDHE officials caution against reading too much into the figures, because the numbers are relatively small and there can be large fluctuations year-to-year. Still, it’s the lowest black non-Hispanic infant mortality rate in Kansas since 1998.

J’Vonnah Maryman, who oversees fetal and infant mortality review at the Sedgwick County Health Department, hopes it’s an indication that efforts to address the causes of infant mortality are beginning to pay off.

“That is something that we’re excited to hear about,” she said, noting the rate fell 32.7 percent from 2013 to 2014. “Overall, if you look at a rolling average over a five-year period, it’s also down within the state, so those are all good things.”

However, Maryman says the battle isn’t won yet. Sedgwick County has a higher infant mortality rate than the state as a whole. That’s been true since at least 1985. One of those barriers, according to Maryman, is that too many pregnant women and young mothers lack health insurance.

“There’s a good proportion of the cases that we review where the families are not insured, or weren’t insured for the duration of the entire pregnancy,” Maryman says. “We recognize the benefits that come with access to insurance and how insurance can be a facilitator to access to health care, and the importance of health care in ensuring the healthy birth of an infant.”

Children’s Mercy Hospital marked the 500th delivery in its high-risk birth center, which raised some eyebrows when it opened four years ago. Warren Emil was born to Mariah and Tom Schumacher of Knob Noster, Missouri, on the afternoon of Sept. 28.

Early in the pregnancy, doctors discovered that Warren had gastroschisis, a condition in which the intestines stick outside the body. The Schumachers opted to have Warren delivered at Children’s Mercy so he could quickly have surgery to place the intestines back inside.

The Schumachers made themselves available to reporters last Wednesday morning at the hospital, where they told their story.

“We didn’t even know about Children’s Mercy. We don’t really know a lot about Kansas City or even hospitals, because we’ve been so lucky to be healthy,” she said.

Now 10 days old and recovering from major surgery, Warren is doing well, according to his father. “His recovery was really fast at the beginning,” Tom said. “He’s a strong little boy.”

Kansas officials announced last Tuesday they will delay for six months a plan to consolidate Medicaid support services for Kansans with various disabilities. The leaders of the Kansas Department of Health and Environment and Kansas Department for Aging and Disability Services said they want to use the time to gather more information from people who would be affected by the changes.

“After discussions with consumers, providers and other stakeholders, we have decided to take additional time to incorporate stakeholder feedback,” KDADS Secretary Kari Bruffett said in a statement.

Advocates for Kansans with disabilities had expressed concern about the pace of the potentially momentous change. They cheered Tuesday’s decision.

“The question I think in everyone’s mind has been, ‘Why the aggressive timeline?’” said Matt Fletcher, associate executive director of InterHab. “So this is a highly encouraging sign.” Fletcher’s group represents people who provide support services to Kansans with developmental disabilities.

State officials months ago announced their intention to combine the seven waivers into two sets of services: one for children and one for adults. They said their intent was to streamline the process and not restrict people to certain services based on a disability label.

The details of the integration plan were expected to be released Sept. 30, with a public comment period to follow. If approved by the federal Centers for Medicare and Medicaid Services, the plan was to go into effect July 1, 2016. But the state was not ready to unveil the draft plan last week and now doesn’t plan to implement it until Jan. 1, 2017.

A recent change in Kansas Department for Aging and Disability Services policy will reduce access to services that help the state’s frail elders avoid often-costly nursing home stays, according to directors of the state’s Area Agencies on Aging.

“This will have an impact on case management services, which we believe are pivotal when it comes to helping our customers remain in their homes,” says Janis DeBoer, executive director of the Kansas Area Agencies on Aging Association.

Late last month, directors of the 11 Area Agencies on Aging in Kansas learned that KDADS officials were enacting a policy that, effective Oct. 1, prevents the programs from spending more than 20 percent of their Senior Care Act budgets on case management. At the same time, those case managers are being required to conduct more in-person visits.

Five Area Agencies on Aging, DeBoer says, are spending more than 20 percent of their Senior Care Act budgets on case management. The Senior Care Act refers to government-funded in-home services for frail elders who typically have low or modest incomes and are not eligible for Medicaid. Because they are not eligible for Medicaid, many of these seniors pay for a portion of the services they receive. Payments are based on a sliding scale.

In Kansas, the Area Agencies on Aging divide $6.7 million in Senior Care Act funds annually. Last year case managers helped more than 4,500 seniors find and pay for the services they needed to continue living at home.

Angela de Rocha, a KDADS spokesperson, said in an email that the agency “did not spring this on them (AAAs) out of the blue. We conferred closely with them, and they had to opportunity to provide feedback.”

The change in policy also blocks the Area Agencies on Aging from spending more than 20 percent of their Senior Care Act funds on administration.