A Quick, Clickable Roundup Of Health News From Our Region For The Second Week Of November 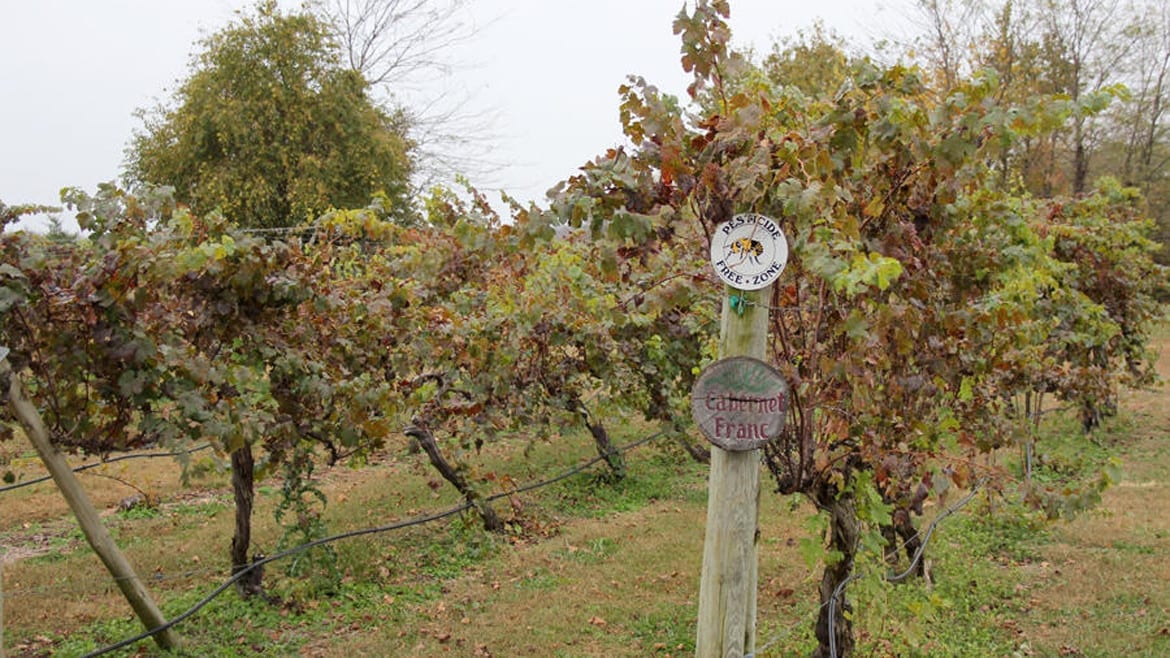 The rows of grapevines at Somerset Ridge Vineyard and Winery near Paola, Kansas, are withering, with dying leaves and shriveling fruit. But that’s expected this time of year.

The prospect of it happening in the middle of the growing season concerns owner Dennis Reynolds more. Grapes are a sensitive crop, especially when it comes to herbicides that may drift over from neighboring farms or ditches.

“In certain states their use is heavily restricted or banned in certain areas,” Reynolds said of the chemicals that kill weeds. “But in a state like Kansas — where sensitive crop producers are very small in number and economic impact so far, whereas large-scale farmers that use these herbicides have much more political power — then we see kind of unfettered usage of them.”

The Kansas Legislature is mulling changes to its weed eradication laws — changes that could affect where and when such herbicides are sprayed.

Senate Bill 134 would shift the responsibility for determining which plants should be designated “noxious weeds,” and subsequently targeted for destruction, from the Legislature to the Kansas Department of Agriculture. It also would give more latitude to individual counties to designate noxious weeds and spray them with increasingly caustic substances.

Proponents say the changes will inject more science into the process of weed eradication and enable government to move more quickly to get rid of invasive species before they crowd out cash crops and good livestock forage. But opponents worry that big business will control the process and that the chemicals used to eradicate problem weeds will have unintended consequences not only for products like Reynolds’ grapes but for human health.

Kansas has 12 weeds declared “noxious” by the Legislature, including the white-flowered Sericea lespedeza and the thorny-looking musk thistle.

SB 134 would give the agriculture secretary the final word in declaring weeds “noxious,” after consulting with an 11-member advisory committee. The committee members, appointed by the secretary, would be:

Supporters of expanding Medicaid in Kansas hope the story of how the conservative governor of another red state found a way to move forward will motivate Gov. Sam Brownback and Republican legislative leaders to do the same here.

They invited a delegation of hospital officials from Indiana to come and talk about how they worked with Republican Gov. Mike Pence and large GOP majorities in the Indiana Legislature to pass a conservative plan that expanded health coverage to more than 350,000 low-income residents of the Hoosier state but required them to share in the costs.

The plan that Pence crafted, which federal officials approved in January, uses Medicaid dollars to purchase high-deductible health insurance plans for adults making up to 100 percent of the federal poverty level, or $11,770 annually for individuals and $24,250 for a family of four.

The state then contributes money to a Personal Wellness and Responsibility, or POWER, account that beneficiaries can use to cover out-of-pocket costs. Unlike traditional Medicaid recipients, Indiana beneficiaries must pay a portion of their premiums.

Brownback and large conservative Republican majorities in the Kansas House and Senate have staunchly resisted expansion for the past three years. But struggling rural hospitals and the story of how Indiana found a way forward on the issue spurred a panel of legislators to talk Tuesday about what it might take for Kansas to pass its own alternative plan.

King was one of four legislators who participated on a panel at the forum sponsored by a coalition of 14 Medicaid expansion supporters that included hospitals and health foundations.

Rural Hospitals In Kansas And Nebraska To Acquire Cerner Technology

About two dozen community hospitals in Kansas and Nebraska have signed up to use Cerner Corp.’s electronic health technology.

The hospitals are members of the Great Plains Health Alliance, which provides management services to critical access hospitals in both states.

Critical access hospitals focus on outpatient care and are limited to no more than 25 inpatient beds. Under federal Medicare guidelines, they are required to be at least 35 miles distant from any other hospital.

Cerner began focusing on rural hospitals about six years ago with the establishment of a self-contained organization within the Kansas City-based health technology giant called Cerner CommunityWorks.

Mitchell Clark, president of Cerner CommunityWorks, says about 125 rural facilities in 34 states are now using Cerner technology. Many of them, he says, had been using paper records.

Now they have “the same cutting-edge technology that would be available to a very large provider such as Via Christi (in Wichita) or Saint Luke’s in Kansas City,” he says.

The agreement with Great Plains gives Cerner a foothold in more than half the critical access hospital locations in Kansas, Clark says.

Contraceptive implants and IUDs are very effective in preventing pregnancy — nearly 100 percent, statistics show. A new federal survey finds many more women are making this choice than did a decade ago.

Federal researchers analyzed data from a national health survey that included birth control practices among women of childbearing age. The survey found that while use of the pill, condoms and female sterilization all dipped between 2002 and 2013, the number of women using long-acting contraception more than quadrupled. These days, 11.6 percent of U.S. women — 4.4 million — rely on either an intrauterine device or a contraceptive implant to prevent pregnancy.

More than two dozen lawsuits alleging that a laparoscopic device used to break up fibroid tissue caused cancerous cells to spread in women’s bodies have been consolidated in federal court in Kansas City, Kansas.

The device, known as a power morcellator, was the subject of a U.S. Food and Drug Administration warning last November. The agency said it posed a risk of spreading unsuspected cancerous tissue, notably uterine sarcomas, beyond the uterus and shouldn’t be used on most women.

Lawsuits alleging manufacturers of the device failed to provide patients with adequate warning of the risks have been filed in more than a dozen states. The Wall Street Journal reported in July that a lawsuit filed against device maker Lina Medical ApS and expected to be the first to go to trial was settled on undisclosed terms.

Most of the suits consolidated in federal court Kansas City, Kansas, were brought against Ethicon, a subsidiary of Johnson & Johnson. Johnson & Johnson voluntarily withdrew the device from the market last year. The cases have been assigned to U.S. District Judge Kathryn H. Vratil.

“There are other manufacturers of these devices, but it’s only the cases against (Ethicon) that were consolidated,” said Thomas J. Preuss, a Kansas City attorney representing a plaintiff in one of the actions.

He said Vratil has a lot of experience handling what is known as multi-district litigation, one reason the cases may have been consolidated here.