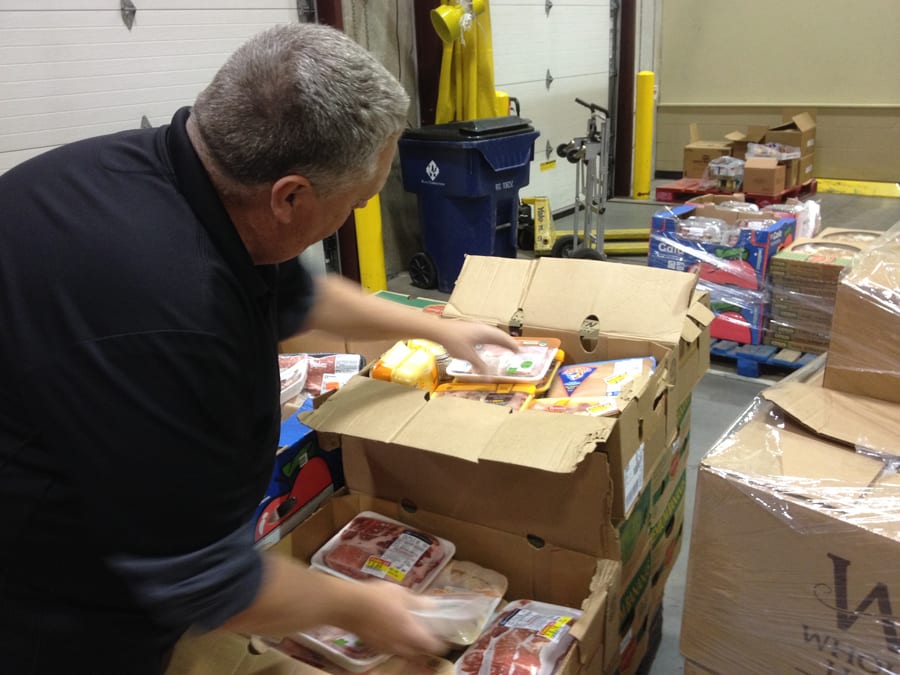 David Allen arranges boxes of frozen meat in the Kansas Food Bank warehouse. Allen is a driver for the food bank, which relies on reclaimed food as a major source for the soup kitchens, food banks and shelters it serves. (Photo: Bryan Thompson | Heartland Health Monitor)
Share this story

Almost a third of the food produced in America goes to waste. But the Environmental Protection Agency and the Department of Agriculture aim to change that through an effort that builds on the motto, “Feed people, not landfills.”

The federal agencies are working with organizations across the country, including some in Kansas, in an effort to reduce food waste by half in the next 15 years. The Kansas Food Bank, which provides food to soup kitchens, food banks and shelters in 85 counties, relies on reclaimed food as a major source of the products it distributes.

On a recent morning, a refrigerated Kansas Food Bank truck backed into the loading area behind the Dillons store at Central Avenue and Maize Road, on the west side of Wichita. The driver, David Allen, opened the cargo door, pulled out a folded metal cart and entered the stockroom through a roll-up door. 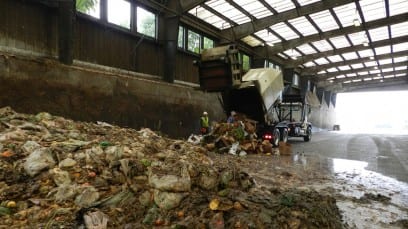 The reported rape of an employee at Osawatomie State Hospital in October exposed security concerns that federal officials cited when they decided last week to stop sending Medicare payments to the facility after Dec. 14.

Osawatomie had submitted a correction plan for the security issues to the Centers for Medicare and Medicaid Services, but federal inspectors who visited the hospital Dec. 15 and Dec. 11 to follow up decided to proceed with cutting payments, said Angela de Rocha, a spokeswoman for the Kansas Department for Aging and Disability Services.

Federal officials have halted Medicare payments to Osawatomie State Hospital, citing security concerns in the wake of a reported rape of a hospital employee in October. (Photo: KHI News Service)

De Rocha said she did not know why inspectors determined the facility wasn’t in compliance, and documents provided by CMS didn’t detail the results of the follow-up inspections.

CMS inspectors cited the reported Oct. 27 sexual assault in a deficiencies report last month. They identified multiple problems with security, including insufficient nursing staff to perform patient status checks, security staff who were present but didn’t perform required safety checks and inadequate supervision in areas where patients at risk of suicide could be in danger.

— Andy Marso and Megan Hart are reporters for KHI News Service in Topeka, a partner in the Heartland Health Monitor team. You can reach Marso on Twitter @andymarso.

Kansas marketplace enrollment jumps by 30,000 in one week

More than 80,000 Kansans have signed up for 2016 coverage through the federal insurance marketplace — a bump of about 30,000 in the week before the deadline.

The Kansas Association for the Medically Underserved reported 84,631 people in Kansas and 253,099 in Missouri had enrolled through healthcare.gov as of Dec. 19. The enrollments were close to the totals for last year’s sign-ups.

The U.S. Department of Health and Human Services had set a deadline of Dec. 15 to get coverage that would start Jan. 1, but later extended the deadline to the early-morning hours of Dec. 17.

Independence, Missouri, on Dec. 21 became the third major municipality in the Kansas City area to raise the legal age of sale for tobacco products to 21 from 18.

Following similar votes in November by Kansas City, Missouri, and the Unified Government of Wyandotte County/Kansas City, Kansas, the Independence City Council approved the measure by a 6-1 vote at a council meeting.

Editor’s note: This is one in a series of articles previewing health-related issues that the Kansas Legislature will face in its upcoming 2016 session.

Kansas mental health advocates will enter the 2016 session at a critical juncture, 25 years into the state’s effort to move away from institutionalization to community-based care.

Crowded prisons and state hospitals have helped create momentum for statewide reforms to fill the gaps in that system — to provide a “continuum of care” to keep Kansans with persistent mental illness out of crisis.

But the state’s ongoing budget problems limit the Legislature’s ability to increase funding for the state hospitals or community-based mental health resources. And last year’s long, bitter tax fight has sapped some of the energy for any major legislative debate before the 2016 elections.