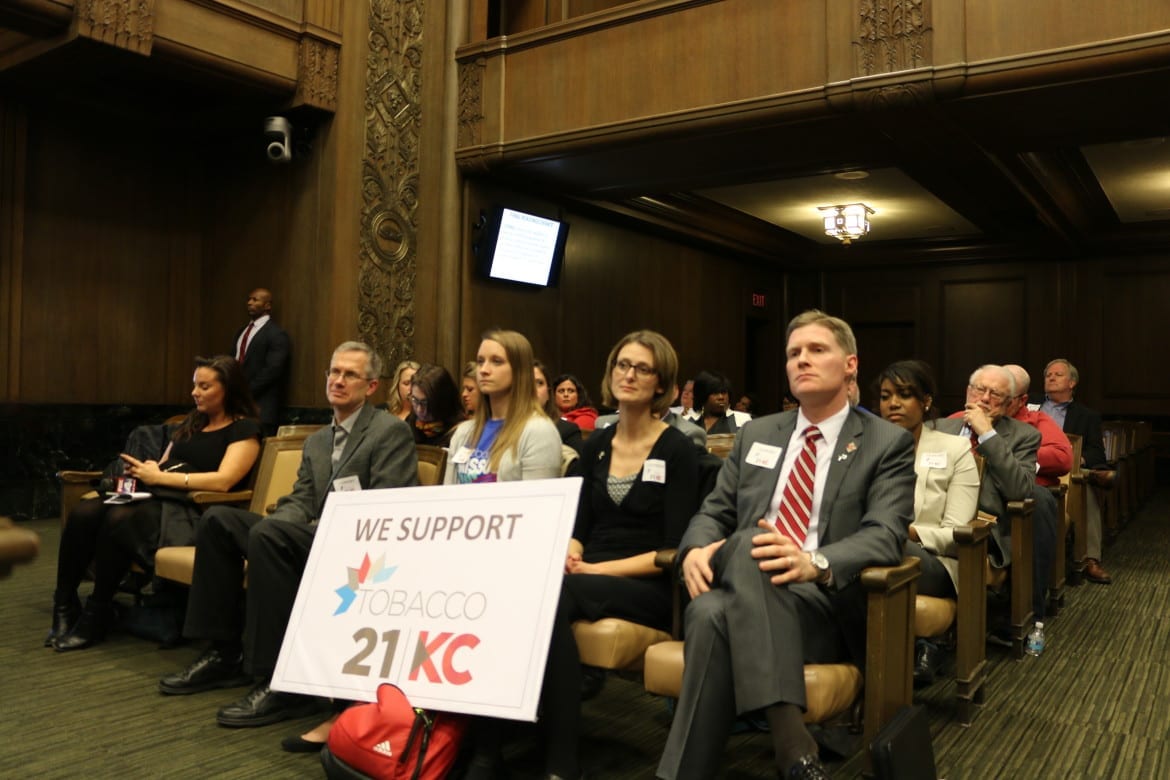 The movement to make 21 the legal age for purchasing tobacco products throughout the Kansas City metropolitan area netted two of the region’s largest municipalities Thursday.

In a move designed to make a big splash, elected officials in Kansas City, Mo., and the Unified Government (UG) of Wyandotte County and Kansas City, Kan., voted within hours of each other to increase the legal age from 18.

The Kansas City Council went first, approving three ordinances that also ensure electronic cigarettes are included in the age limit and the city’s indoor-smoking ban. Councilwoman Katheryn Shields was the lone opponent to any of the measures.

Among the UG Board of Commissioners, Mike Kane was the lone dissenter.

While Shields remained mum at the Kansas City Council meeting, Kane voiced the same arguments he gave for voting against the age change in committee.

If people are old enough to serve in the military or to be hired as first responders, Kane said, they should have the right to choose for themselves if they want to smoke. He also said there did not seem to be a groundswell in the community to make the change.

“It is our job to listen to the people,” Kane said.

Thursday’s votes followed last month’s launch of Tobacco 21 | KC, a regional effort to implement a national movement to make 21 the legal age for purchasing tobacco products in as many municipalities as possible. Leaders of the effort include the Greater Kansas City Chamber of Commerce.

The aim is to keep children from starting to smoke when they are young and impressionable, with the hope that the delay will prevent them from picking up the habit. According to federal data, more than 80 percent of all adult smokers begin smoking before the age of 18, and more than 90 percent do so before leaving their teens.

Tobacco 21 supporters say disrupting the “social supply chain” is one aim of increasing the age limit. The thought is that teens are less likely to associate with people in their early 20s than they are with high school-age kids.

Tobacco 21 proponents also reject the argument that teens will drive to nearby municipalities that still sell cigarettes to 18-year-olds.

They cite the example of Needham, Mass., a small Boston suburb, which saw its teen smoking rate decrease by 46 percent in the years following enactment of its Tobacco 21 ordinance, even though abutting municipalities had not followed suit.

Leaders of the Kansas City-area Tobacco 21 effort hope they won’t have to deal with such inconsistency for long, thinking the moves in Wyandotte County and Kansas City, Mo., can be a springboard to similar votes in other area cities.

“We are thrilled by the progress,” said Scott Hall, a vice president with the Kansas City chamber. “It’s a great start for the effort.”