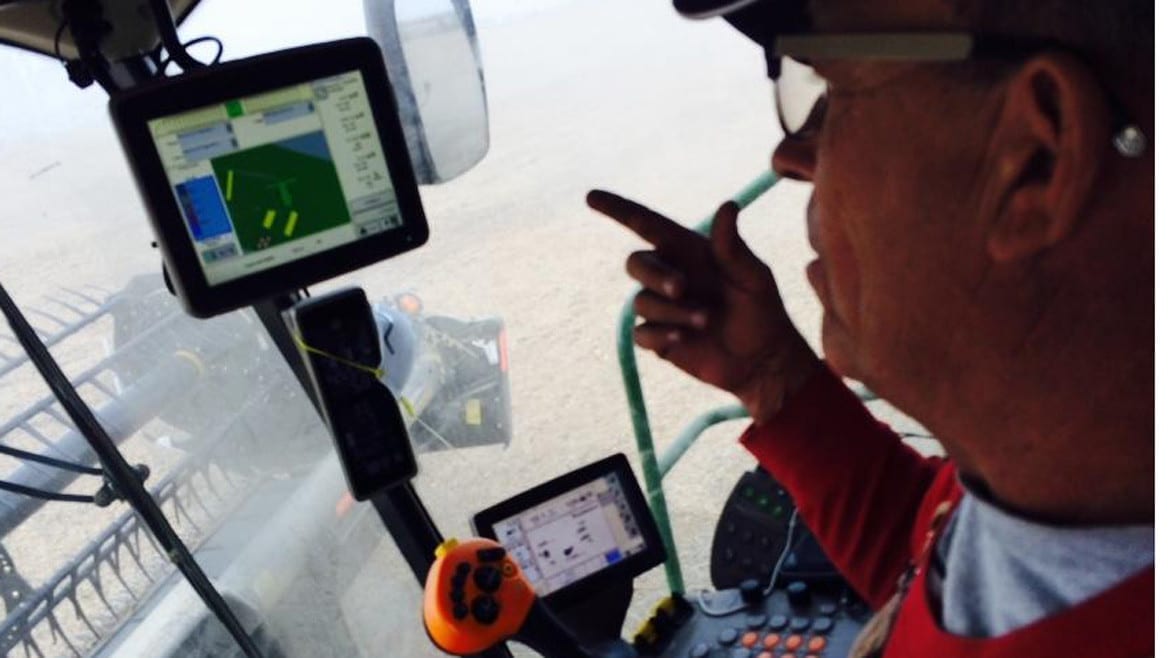 As he rolls across the land in his John Deere combine, joystick in hand, three computer monitors offer him a host of information. He knows how much fertilizer was used, the beans’ moisture content, how full the grain tank is, and that he’s getting 60 bushels an acre.

All the while, Hurst, president of the Missouri Farm Bureau, fields business calls on his cell phone. And when he’s not listening to his favorite podcast about economics, he hears the monitors’ beeps, warning him if he’s not recording all this information on a thumb drive.

Farming today is a high-tech business, now driven by data as the industry evolved.

“It’s the story of agriculture,” Hurst said. “We get better.”

Yet the government has not kept up with the farmers it has promised to serve.

A computer system envisioned a decade ago to modernize how the U.S. government pays farmers and ranchers is $140 million over budget, two years overdue and just 20 percent operational.

So far, the U.S. Department of Agriculture has spent $430 million on the system, a project known by the acronym MIDAS for Modernize and Innovate the Delivery of Agricultural Systems.

Based in Kansas City, where the USDA’s Farm Service Agency operates its information technology hub, MIDAS is under fire from Congress and has been the subject of scathing government reports.

U.S. Agriculture Secretary Tom Vilsack, called before the House Committee on Agriculture in July, admitted MIDAS’s failure, blaming a grand vision, an enormous operation and a lack of oversight.

Vilsack placed the embattled program on hold in July 2014. The Farm Service Agency is currently using an old Web-based system that duplicates what MIDAS was supposed to accomplish, according to government audits.

Also faulted by government reports were a dozen unnamed contractors hired to create MIDAS. SRA International, a large public company which won the initial $500 million MIDAS contract, is based in Virginia and has an office in Kansas City. An SRA spokeswoman declined comment for this story.

“Is the government at fault? Absolutely,” said David Powner of the Government Accountability Office, a congressional watchdog that has done three reports on MIDAS. “Is there a responsibility on the part of lead and sub-contractors? Absolutely. Everyone’s in it together.”

A Golden Vision for MIDAS

When planning started in 2004 during the Bush Administration, MIDAS was heralded as a way for the government to efficiently pay out the billions annually to farmers who have signed up for government safety-net programs. Since the Farm Service Agency’s inception as part of Roosevelt’s New Deal (first known as the Farm Security Administration), government payouts have been made through the agency and its 2,200 county offices currently situated across the country.

In June 2010, Vilsack announced at the MIDAS kickoff in Washington D.C. that he hoped it would allow farmers to start trusting the government again by helping build “a more vibrant rural economy.” Officials said MIDAS would virtually link the Farm Service’s offices, place the 30-plus government farm programs in one system and eventually allow farmers and ranchers to access data from their home computer.

Five years later, Vilsack appeared before the House Ag Committee sounding apologetic, quoting the Bible and admitting that “we didn’t measure our steps and we didn’t have as many counselors as we needed.”

“When this thing was started in 2007-2008, I think the vision was pretty grand,” Vilsack said. “But I don’t think people fully appreciated the difficulty of basically implementing that in the context of a 1980 system, which is what we basically have at FSA offices.”

Hurst, who was asked by congressional leaders to monitor the project and report back before the July hearing, said most farmers aren’t aware of MIDAS since it’s not operational yet. But he said he and others are frustrated by the antiquated system used by Farm Service and the USDA’s Risk Management Agency, another government program that handles crop insurance.

Programs used by Farm Service (FSA) and the RMA aren’t compatible, he said. So Hurst ends up taking his crop information into the local FSA office, and then he walks it across the street to the RMA office.

“I’m generating the same information three different times,” Hurst said. “I’m generating it to FSA, and then I’m taking it to an insurance agent in small-town Missouri who’s entering it by hand for RMA.

“And all the time,” he said, “I’ve got a thumb drive with all that information already on it.”

History of Problems Dating to 2006

A GAO audit published in 2008 warned of major problems with MIDAS, with the first issues popping up in 2006 and the USDA computer system shutting down entirely for a month in January 2007. The GAO found a lack of management, a failure to set performance goals and no dedicated staff to analyze the system.

“The U.S. Department of Agriculture (USDA) has experienced significant problems with its information technology systems that support the delivery of benefits programs to farmers,” the 2008 GAO audit reported.

“FSA intended for the MIDAS program to modernize its delivery of programs to farmers and ranchers,” Conaway said during the July USDA oversight hearing. “Unfortunately, it’s been mismanaged as evidenced by the fact that its $140 million over budget and only contains two of the five planned core functions.”

A 2015 GAO report went even further, finding that just 20 percent of the MIDAS program was functioning and questioning USDA’s ability to manage any IT program into the future.  By June 2013, Farm Service started developing similar applications to MIDAS on its centrally-located legacy system, called Web Farm, said the GAO’s Powner.

“When that was done, you’re really duplicating effort,” Powner said. “I think a key question is: why wasn’t it halted sooner?”

Vilsack told Congress that the USDA has made some progress with MIDAS and that the agency has seen some benefits. One benefit is offering farmers and ranchers who own land in several counties the ability to go to a single Farm Service office to view records, which wasn’t available in the past, Vilsack said.

The USDA has established a review process, Vilsack added, and he sees weekly reports on department technology.

Room to Roam with No Money Down

Not So Happy Holidays For The Food Insecure