Citrus Fruit Grown in the Midwest… In Winter

Tapping In to the Earth’s Energy to Grow Local Food 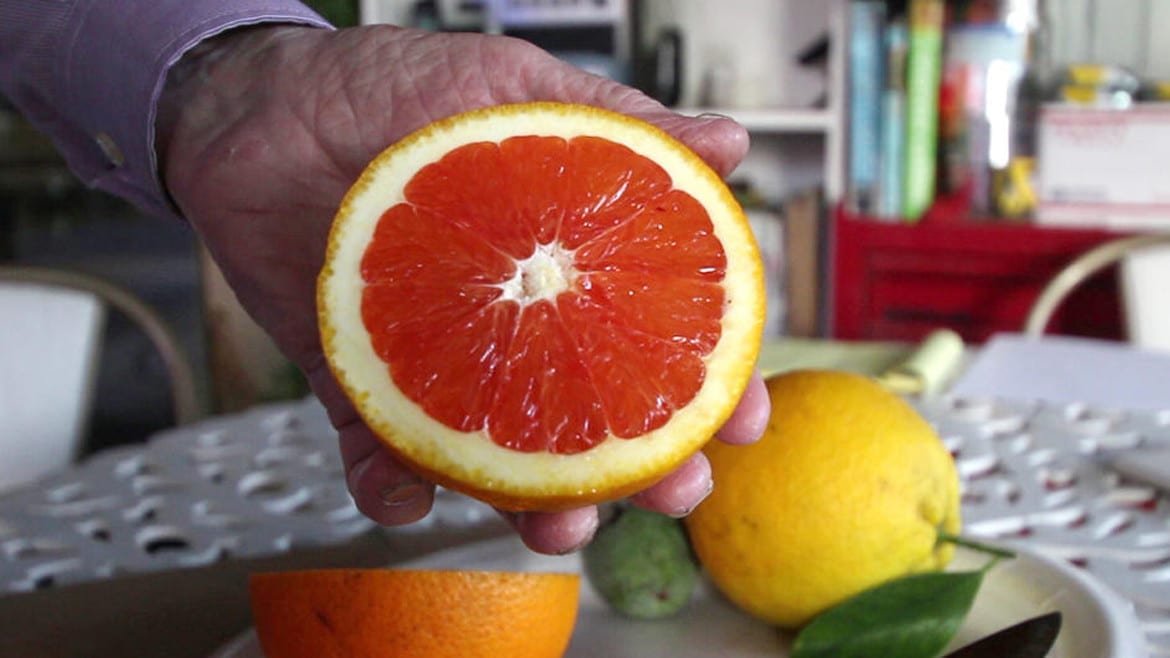 Russ Finch holds up half of a Cara Cara orange that grew in his geothermal greenhouse in Alliance, Nebraska. (Grant Gerlock/Harvest Public Media)
Share this story

The middle of winter is when the stream of locally grown fruits and vegetables in the Midwest begins to freeze up.

Nicole Saville knows first-hand. Saville is the produce manager at Open Harvest, a grocery coop in Lincoln, Neb. The store promotes food grown by local farmers, but this time of year there just isn’t much available.

“We can get kale and some culinary herbs this time of year,” Saville said. “Otherwise the only other local option is a soil mix in our garden center.”

That means the bunches of carrots, bags of onions, and piles of pears on shelves from Lincoln, Neb., to Ames, Iowa, to Columbia, Mo., made a long trip to get there.

“This time of year we are sourcing globally almost,” Saville said. “It hurts me to say because the fossil fuels it takes to get things here are astronomical. But we try to source from within the United States when we can. Florida and California are going to be the two biggest options.”

In the Midwest, it’s possible to stretch the growing season for nine months or more with unheated hoophouses or high tunnels, metal frames stretched over with plastic coverings. But even a well-insulated high tunnel is likely to have to go dormant at some point.

Greenhouses can produce year round, but they are typically heated by burning fossil fuels. That’s why growing in local greenhouses isn’t always best for energy consumption, says Dawn Thilmany, who studies the local food system at Colorado State University. .

“It might actually, energy-wise, make more sense to ship from far away distances because we do have a lot of energy efficient ways to ship including trains, barges and such,” Thilmany said.

But some creative locally-focused growers are working on ideas that could change that equation.

“In the case where people are being innovative, where some of that energy is in alternative forms, it might make sense to produce locally year-round,” Thilmany said.

One alternative is up-and-running in western Nebraska, created by an amateur engineer. Former mail carrier and farmer Russ Finch built a greenhouse near Alliance, which he calls the Greenhouse in the Snow. Though it looks ordinary from the outside, inside it’s a citrus grove with lemons the size of oranges and oranges the size of grapefruits. In Nebraska.

“We can grow the best citrus in the world here on the High Plains,” Finch said one afternoon as he was walking me through the original greenhouse design he built 20 years ago.

And it doesn’t break the bank or suck too much energy because the other unique aspect about his greenhouse is that it’s geothermal. It harnesses the earth’s heat by pumping air through underground tubes to heat and cool the plants.

“All we try to do is keep it above 28 degrees in the winter,” Finch said. “We have no backup system for heat. The only heat source is the earth’s heat at 52 degrees at 8-foot deep.”

The idea behind Finch’s design is that you can grow a variety of crops year-round in a low-energy, low-carbon system. If that were to work on a large scale, Nebraska stores could sell local lettuce in the dead of winter. Maybe even local oranges.

Designs for low energy greenhouses vary; some move air or water underground, while others heat water in solar cells and store it in tanks to heat the greenhouse at night. Stacy Adams, a horticulture and greenhouse management instructor at the University of Nebraska Lincoln, says whatever the method it’s aimed at the same goal: to find a sustainable ways to get through cold winter nights.

“We could use fossil fuels, but if we can make the environment better by using sustainable options why not do it?” Adams said. “It’s basically free energy that we can capture.”

And that’s better for a farmer’s bottom line because energy is one of the biggest costs for Midwest greenhouses.

Adams says geothermal greenhouses can work, but there are limitations to such a low-energy system. For instance, Adams says they are best suited for cold crops like kale, cabbage, or lettuce.

“But when we start getting to the warm-loving crops like tomatoes, which everyone loves, or cucumbers and squash, then we’re talking about greenhouses that need to be much warmer,” Adams said.

Also a low-energy greenhouse is most efficient if it’s relatively small. It might supply a farmers market, but probably not a supermarket.

To grow more, you’ll need more energy. Perhaps fossil fuels. But that’s where Adams says people should think outside of the box. Imagine using heat from the wastewater at a factory like a slaughterhouse or an ethanol plant. He says manure from dairy barns or beef feedlots could generate methane to heat a greenhouse.

Any method that incorporates renewable energy sources would improve the footprint of local food grown in a greenhouse when compared to the shipments brought in from California or Mexico.

That could give winter a local flavor, even in Nebraska.

Can the Midwest grow citrus? Russ Finch lives in northwestern Nebraska in the town of Alliance. He designed and built ‘The Greenhouse in the Snow,’ a greenhouse that runs only on a small fan that circulates geothermal heat. Using energy costs of about one dollar a day, Russ produces hundreds of pounds of citrus fruit every year to sell at local farmer’s markets. Watch the video: