These Midwest Farmers Think They Know The Next Trendy ‘Superfruit’ 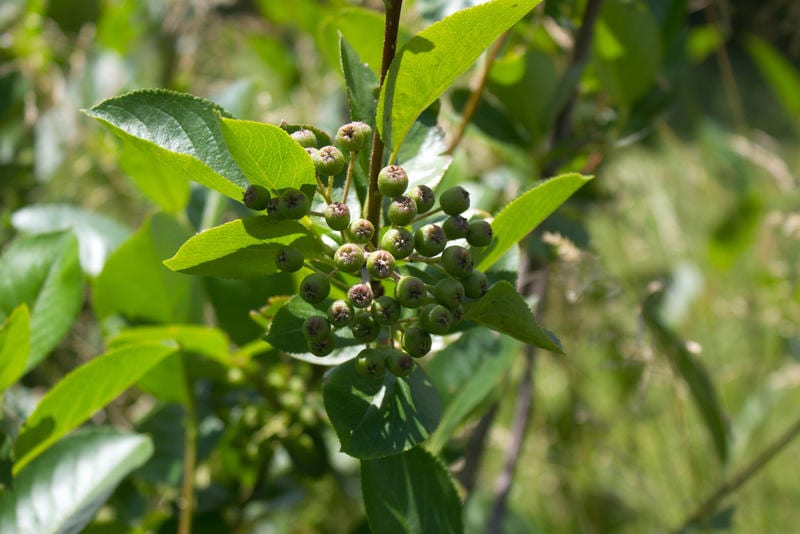 Peggy Fogle and her dog, Abe, walk among rows of aronia berry bushes on the family property outside Carlisle, Iowa. Plants on the ends of rows are smaller from years of being nibbled by deer and rabbits. But on nearly nine acres, filling four separate fields, the bushes are reaching maturity, eight years after Fogle and her husband decided to put in their first ones.

“We had looked for something organic, sustainable, native to the area, low-maintenance,” Fogle says, “that could be done here to provide a secondary income and be a healthy alternative.”

The couple once owned a restaurant in town, but closed it after Fogle became sick. She began paying much more attention to what she was eating and after learning about antioxidants and other nutrient values in fruit, she recognized the potential health benefits of aronia. Dismissing alpacas, fish, grapes and other possible agricultural products, and on the advice of their son who studied horticulture, the Fogles eventually invested about $10,000 for their 5,000 aronia plants.

Aronia is the modern name for the native black chokeberry and it’s billed as a “superfood” in the company of pomegranates, acai and goji berries. The Midwest is suited to growing aronia, varieties of which have been used in landscaping, and like the Fogles, a growing cadre of farmers is trying to get in on the craze.

“We figured the market would just come because it was so healthy,” Fogle says, “and if people knew about the health properties of the berries, and the potential development of the berries, it would be a natural fit for us.” 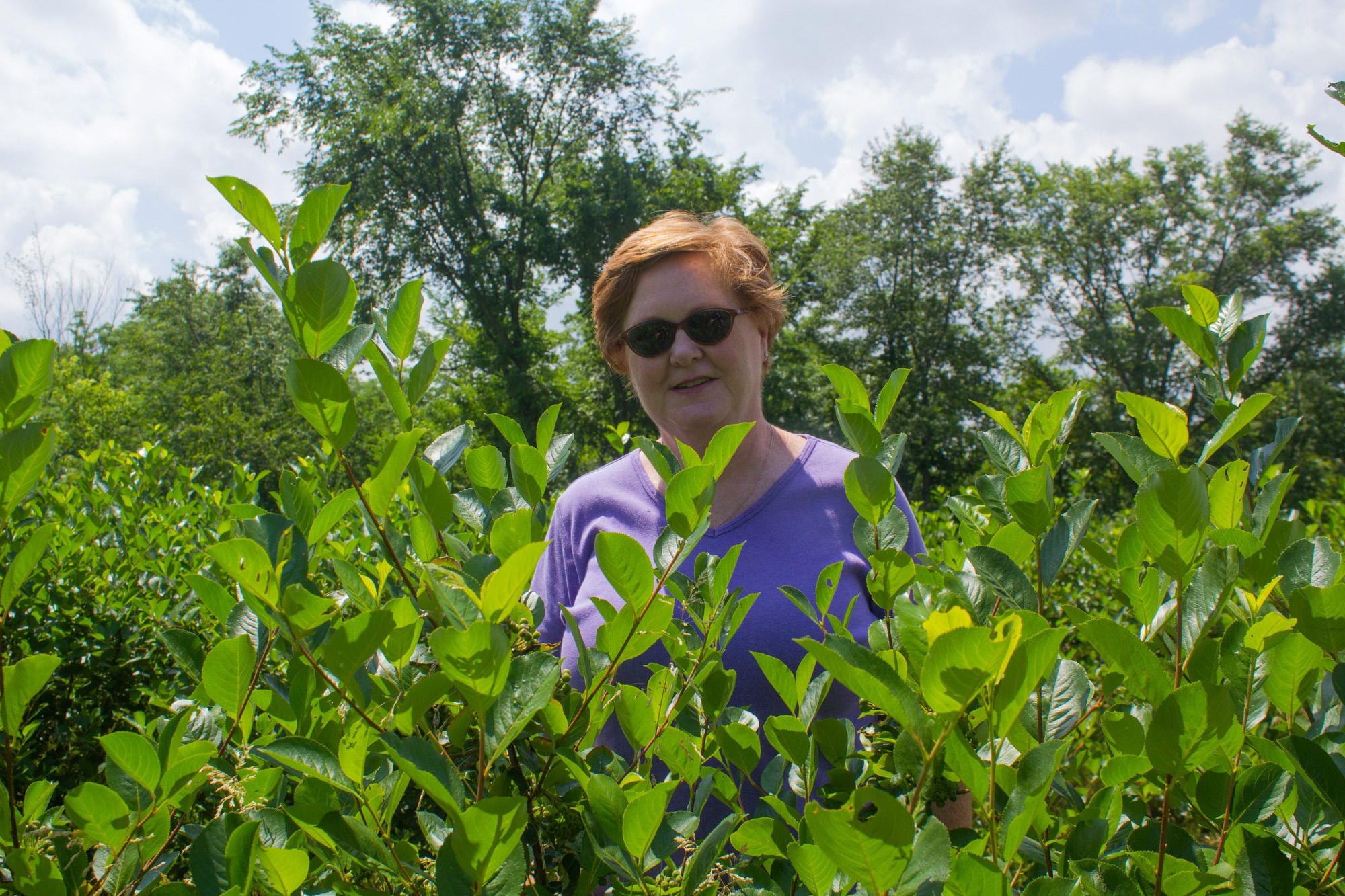 Now that they’re growing the fruit, she and the others have to convince people to eat it. The dark purple berries replace raisins in her oatmeal cookies. She adds them to chili, lemonade, apple pie. They are high in antioxidants, certain vitamins and minerals, and fiber.

Fogle says the bushes are pretty in the fall with burgundy leaves, and in the spring the white flowers give off a lovely scent. But she hopes someday her granddaughters will have a family business to carry on.

“Aronia is has its challenges. It’s kind of like cranberry 70 years ago,” says Chuck Dillon, who came out of retirement from the cranberry industry to head-up the North America Aronia Cooperative. “Nobody knew what it was. And the second challenge is, if you pulled one off the vine and started eating it, you probably wouldn’t eat it again.”

Aronias are tart and don’t have the snacking appeal of fresh blueberries or strawberries. But Dillon says decades ago cranberry growers transformed their sharp, tangy fruit into an everyday presence. All those cranberry juice blends now found on supermarket shelves and the lightly sweetened, dried “craisin” helped push the cranberry industry to over 1 billion pounds a year, he says. At that volume, growers can make money selling for 30 cents a pound.

Dillon realizes most aronia start-ups aren’t expecting to wait 50 or 70 years to start making money. And he has high hopes for aronia — close to 1 million pounds this year, and maybe 10 times that by 2022, according to the Cooperative’s strategic plan. But the fruit is not yet so mainstream that you can buy your kids aronia berry juice, and Dillon is worried some growers may have outsized expectations.

It’s a bit of a chicken-and-egg situation, says Andrew Ristvey, of the University of Maryland Extension. A product has to be available for people to fall in love with it, but getting it into people’s hands is costly.

“This is the tipping point for the aronia industry right now,” he says. “Can we supply enough product for those processors who want to take it on?”

And if they can, he adds, will it be sustainable for growers if they’re paid less than 50 cents a pound?

Andrew Pittz doesn’t want to talk about that price. His parents’ Sawmill Hollow Farm in Missouri Valley, Iowa, may have been the first commercial aronia operation in the United States. Today, he travels the country promoting aronia as a native superfruit. He doesn’t want it to become the next cranberry.

“My dad, growers around him,” Pittz says, “made a decision to say ‘Okay, let’s make a really central and calculated approach to make sure that the aronia berry industry gets established as a premium industry and just doesn’t get sold to the lowest bidder.’”

He puts it in a category with exotic imports such as Brazil’s acai and China’s goji, but with the marketing cache of being native to the Midwest.

“You would always want a price of the aronia berry to be well above some of your commodified fruits,” he says, adding that 30 cents a pound won’t even cover the current cost of harvesting aronia for many people.

Thanks in part to Sawmill Hollow and the Pittz family’s efforts, Iowa is a leader in aronia production. But growers in Missouri, Nebraska, Illinois, South Dakota, Wisconsin and Minnesota are members of the North America Aronia Ccooperative. The Midwest Aronia Association promotes the fruit at state fairs and other events throughout the region.

Ristvey helped start the Mid-Atlantic Aronia Growers Association and says there are growers in the Pacific Northwest, too. But he says the Midwest has the most optimal environment for aronia in the United States.

Peggy Fogle hires some people to harvest and recruits community groups, to which she makes a cash donation, to help with the rest. It’s all done by hand when the fruit reaches the right sugar content, as measured with a refractometer. This year she expects to do much better than the 2,000 pounds her bushes produced last year.

Fogle is a contract grower for Sawmill Hollow. When I first spoke with her by phone in the spring, she was still awaiting payment for the past two seasons’ harvests. She and other growers became a bit nervous about investing in this food trend. A couple of weeks later, things had improved.

She says Sawmill Hollow “sold the berries and they are in the midst of getting everybody taken care of.”

She says this recent sale was above a dollar a pound and right about what she’d expected when she started growing aronia.

“In your back of your mind you may have had concerns, but as a whole, I guess we’re people of faith and we knew that they were just too good to not come through,” Fogle says.

Still, it’s unclear when—or whether—the fervor of aronia’s grower-advocates will translate into a mass-market product that can truly produce a return on their investment.