Could Genetically Engineered Animals be Coming to a Plate Near You? 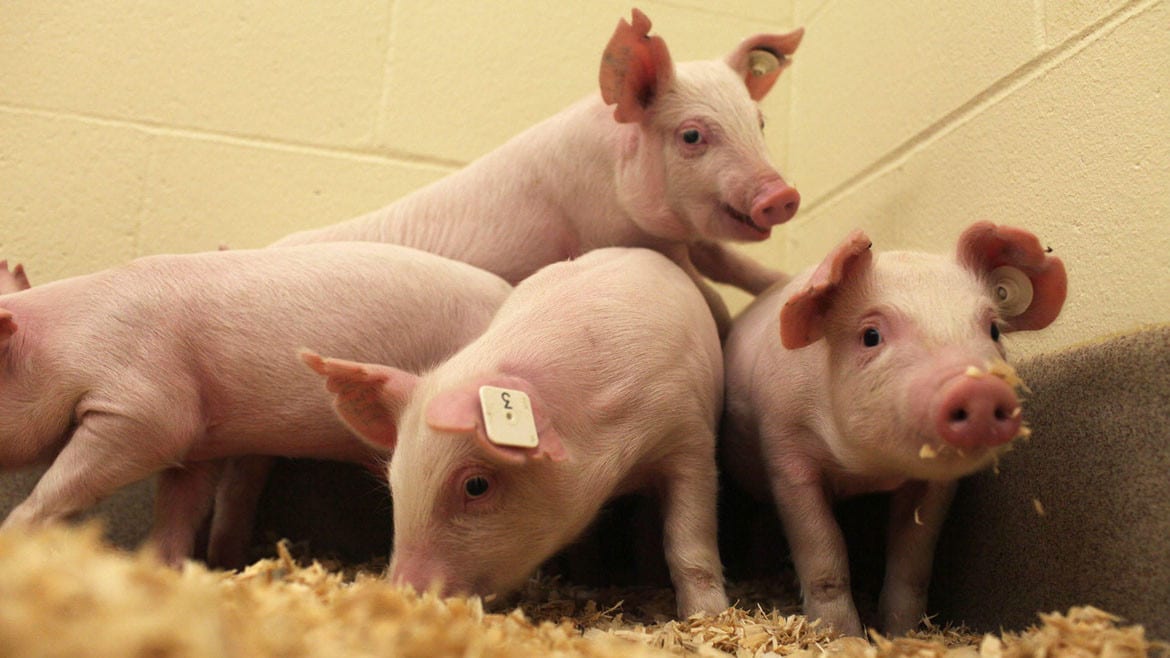 Tucked away in a University of Missouri research building, a family of pigs is kept upright and mostly happy by a handful of researchers. Two new litters recently joined the assembly of pudgy, snorting, pink piglets.

While they look like an ordinary collection of pigs one might find in hog barns all over the country, these animals are special. They’re genetically engineered and they are part of a new crop of GE animals with technology that could be coming soon to the food on your dinner plate.

A team of researchers from the University of Missouri and Kansas State University developed the pigs, a new breed that is resistant to an incurable disease that plagues hogs barns. Porcine Reproductive and Respiratory Syndrome (PRSS) can spread rapidly through swine populations and often forces hog farmers to euthanize whole barns at a time.

The research team published their findings as a commentary in the journal Nature Biotechnology in December 2015. Research was partially funded by the company that ultimately bought the rights to the technology.

“[PRSS] is a devastating disease,” said Kristin Whitworth, a research scientist at the University of Missouri who worked on the project. “It causes persistent infection. It causes abortions in pigs so they lose their litter. It causes a lot coughing and the pigs get very sick.”

Once the virus enters a pig, it spreads with the help of a protein. Whitworth and her team genetically edited the gene that makes this protein, effectively removing it.

“Once that molecule is no longer present, then the virus could not only not get inside the macrophages, but could not spread from pig to pig,” Whitworth said.

The scientists say they hope hogs produced with the gene editing technology will be on U.S. dinner tables in a matter of years. That hope rests on garnering approval for the biotech pigs from the U.S. Food and Drug Administration, which won’t be an easy task.

“The animal breeding community is looking to see what the response of the regulators is going to be to this technology.” — Alison Van Eenennaam, animal biotechnology and genomics specialist, University of California, Davis

There is just one animal currently approved for marketing in the U.S. – a salmon that has been genetically modified to grow twice as fast as wild salmon. It took decades for the company that developed the fish, AquaBounty, to gain approval. The company faces a new setback, in fact, in that the FDA issued a ruling Friday that may block its sale for years.

“Up until this point, even though the technology was developed more than 30 years ago, that’s the only thing that’s ever gotten through regulatory [procedure],” said Alison Van Eenennaam, an animal biotechnology and genomics specialist at the University of California, Davis. “And it took about 20 years and tens of millions of dollars to get it through.”

Scientists have developed genetically engineered livestock in the past and there are other genetically engineered animals in the works, from hornless cattle to hypoallergenic cows. None have yet made it to stores, largely because of the novelty of the underlying technology, which is expensive and un-tested by regulators and consumers alike.

“The animal breeding community is looking to see what the response of the regulators is going to be to this technology,” Van Eenennaam said.

There is no one-size-fits all study that will quell scientific concerns. Each animal and genetic modification is different.

“For example if you’re introducing a brand-new protein that perhaps humans don’t typically eat, is that something we’re allergic to?” asked Kevin Wells, an assistant professor at the University of Missouri who worked with the PRRS-resistant pigs and sat on the federal advisory committee on the AquaBounty salmon. “Whereas you wouldn’t necessarily have to ask that question of something we eat every day.”

The companies spending millions on this technology are also worried about consumer response, especially as genetically modified food remains a hot-button issue.

Opponents of genetic engineering in animals argue there are too many risks and too many unknowns associated with GE animals. They worry about environmental impacts and changes to human health.

Products of GE animals are not currently required by the FDA to be specially labelled, though the agency did issue draft guidelines for a voluntary labeling initiative.  Sen. Barbara Murkowski of Alaska has threatened to battle the confirmation of a new FDA commissioner over the agency’s safety and labelling decisions of GE salmon.

When it comes to the PRRS-resistant pigs, researcher Whitworth says Genus, the company that purchased the technology, will do the hoop-jumping for federal approval.

“They’ll look at feed efficiency and growth and they’ll introduce the edit into their genetic lines,” she said.

And if that happens, it likely won’t be long before the pigs are in grocery stores across the country.