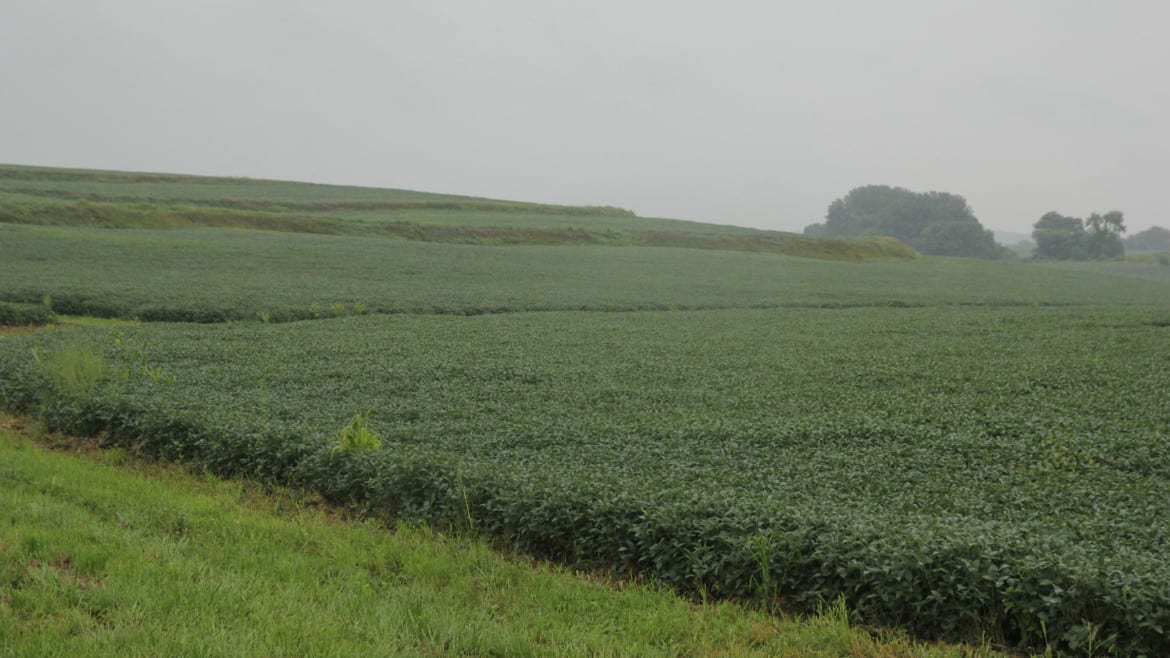 When it rains, topsoil and fertilizer run off the hills of Pfrantz farms. In addition to planting grass waterways and terraces to counter the threat of erosion, Pfrantz plans to plant cover crops this fall. (Photo: Abby Wendle | Harvest Public Media)
Share this story

Editor’s Note: This is the second of a two-part series on agricultural runoff from Harvest Public Media. The first part of the series ran on Flatland on September, 26.

In order to grow massive amounts of corn and soybeans, two crops at the center of the U.S. food system, farmers in the Midwest typically apply hundreds of pounds of fertilizer on every acre they farm. This practice allows food companies to produce, and consumers to consume, a lot of relatively cheap food.

But that fertilizer can leach through soil and wash off land, polluting our drinking water, destroying our fishing rivers, and turning a Connecticut-sized chunk of the Gulf of Mexico into an oxygen-depleted hypoxic zone, suffocating aquatic life.

Despite environmental groups, non-profit organizations, and the government pressuring farmers in the Midwest to clean up their act, this multi-billion dollar problem has continued to fester for decades. Now some of the world’s wealthiest food companies are concerned about how it could hurt their bottom lines, and they are beginning to join the effort.

“No parent wants to give their kid a glass of milk in the morning that may be linked to these issues,” said Brooke Barton, senior program director for the water program at Ceres. “The biggest risk for these companies is their reputational risk of being associated with toxic algae and hypoxia.”

Ceres helps some of the biggest investment groups understand the environmental risks associated with the companies in which they invest, and has recently turned its attention to the threat of water scarcity caused, in part, by pollution from the agriculture industry.

Fearing a potential backlash from customers, companies like Coke, Nestle, General Mills, and Unilever, maker of Hellmann’s mayonnaise, are beginning to pressure farmers to reduce their contribution to water pollution.

Unilever, which needs a lot of soybean oil to produce its Hellmann’s mayo, launched Sustainable Soy in partnership with the Iowa Department of Agriculture, Archer Daniels Midland, and the non-profit organization, Practical Farmers of Iowa. The campaign for Sustainable Soy comes complete with anadvertisingcampaign featuring the wholesomeness of Unilever’s soybean farmers. The company hopes to enroll 250 farmers and 285,000 acres of Iowa cropland by the end of the year.

While the U.S. Department of Agriculture has guidelines and a certification process for “organic,” no such program is in place to clarify what it means for a farm or a food product to be “sustainable.” Unilever, which has a sustainable agriculture code (pdf) that outlines practices it expects its farmers to adhere to, said for them, it boils down to “continuous improvement.”

“How can they get better yields? How can they use less fertilizer? How can they just better overall improve their practices?” said Stefani Millie, a senior manager for sustainability at Unilever’s U.S. division.

On the path towards improvement, there’s always a first step. For farmers in the Sustainable Soy program, it’s the very basic step of figuring out what they’re doing that could be contributing to the problem.

To convince farmers to share their farming practices, which they protect like a trade secret, Unilever is offering them an extra ten cents for each bushel of soybeans they grow. In exchange, farmers report things like how much fertilizer they spray, what kind, and when. Unilever lays this private information on top of public information about the land’s soil type, proximity to streams and rivers, and the slope of their hills. The result is an environmental footprint of each one of the farmers’ fields.

Though the farmers and their land remain anonymous, Unilever shares this information with the entire group, which allows farmers to see how the fields on their farm compare and how their farm as a whole stacks up against their neighbors’. The result is a little friendly competition that, Millie said, could lead farmers to invest in improvements.

“They can look and see that maybe they’ve got one field that’s using more Nitrogen. And they can go back and say, “Why is this different from my neighbors?” Millie said. “Hopefully it will trigger some of those thoughts and have them investigate to continue to improve their practices.”

Craig Pfantz, who farms more than 2,000 acres of corn and soybeans in State Center, Iowa, signed up when Unilever launched Sustainable Soy three years ago.

“I like it,” Pfantz said. “What got me into it? To be honest? The ten cent premium.”

Now, he says the knowledge he’s gained is more valuable. For instance, Unilever’s environmental footprints of his fields have given him a clearer picture of his farm’s “problem spots.”

Rounding a corner covered in seven-foot tall stalks, Pfantz’s pickup dips into a valley and then climbs a slope. At the top, he idles his truck in the middle of the road, leans against his steering wheel and points through the rain-spattered windshield towards a steep hill covered in forest green soybeans.

“You get a combine on that kind of slope and you’ll wonder, “what am I even doing here?” Pfantz said. “It probably shouldn’t even be farmed.”

Pfantz sprays his crops with fertilizer through a hose attached to his planter. Applying fertilizer at the same time as the crop is planted is called “side-dressing,” a conservation practice that helps reduce the amount of chemicals running off his fields.
(Photo: Abby Wendle | Harvest Public Media)

Hills like this are prone to erosion. During heavy rains, they wash away fertile topsoil along with the phosphorus Pfantz sprays on the ground to fertilize the crop. Despite utilizing a number of conservation practices – no-till, side-dressing his nutrients, terracing, and grass waterways to slow down the rain – his rolling ground is still vulnerable to washing away.

That’s a financial loss for Pfantz, who spent money on the fertilizer that runs downstream. There’s also the long term cost of the quality of his soil deteriorating, jeopardizing the value of the land which he’ll eventually pass down to future Pfantz generations.

He thinks out loud for a moment, considering what it would take to convert these patches of ground back into small grains, maybe even pasture. But it doesn’t make economic sense.

“It boils down to profit,” Pfantz shrugs. “The whole agricultural system has been developed around corn and soybeans, so we have to make what we have work.”

Pfantz, committed to reducing his environmental footprint, is signing up for the second step offered to farmers in the Sustainable Soy program. This year, he’ll plant a cover crop of cereal rye on his most vulnerable ground. The crop, which he’ll plant after harvesting his corn and soybeans this fall, will spend the winter soaking up extra nitrogen and holding down his phosphorus and soil.

For the next three years, Sustainable Soy will help Pfantz pay for this conservation practice. After that, he’ll have to foot the bill himself. But, Pfantz believes it’ll be worth it.

“You have to look at cover crops as a long term investment – like putting money in the bank,” he said. “You’ll maintain the sustainability of the land which will make it productive for future generations.”

While Pfantz is making some tangible improvements on his farm, there’s a difference between real progress and good PR for the food company pushing him in this direction.

“Ultimately for this to be credible with consumers,” said Brooke Barton from Ceres, “The companies need to show that there are real changes over time in production impacts. Water quality improvements, soil health improvements, this is the end game.”

To really have an impact on water pollution in the Midwest, companies will need to push more farmers from information gathering to action. And just as farmers react to a little coaxing from companies to do a better a job – companies react to pressure from consumers.

Harvest Public Media, based at KCUR 89.3, reports on farm and food issues in collaboration with public media stations across the Midwest. For more information, visit www.harvestpublicmedia.org.