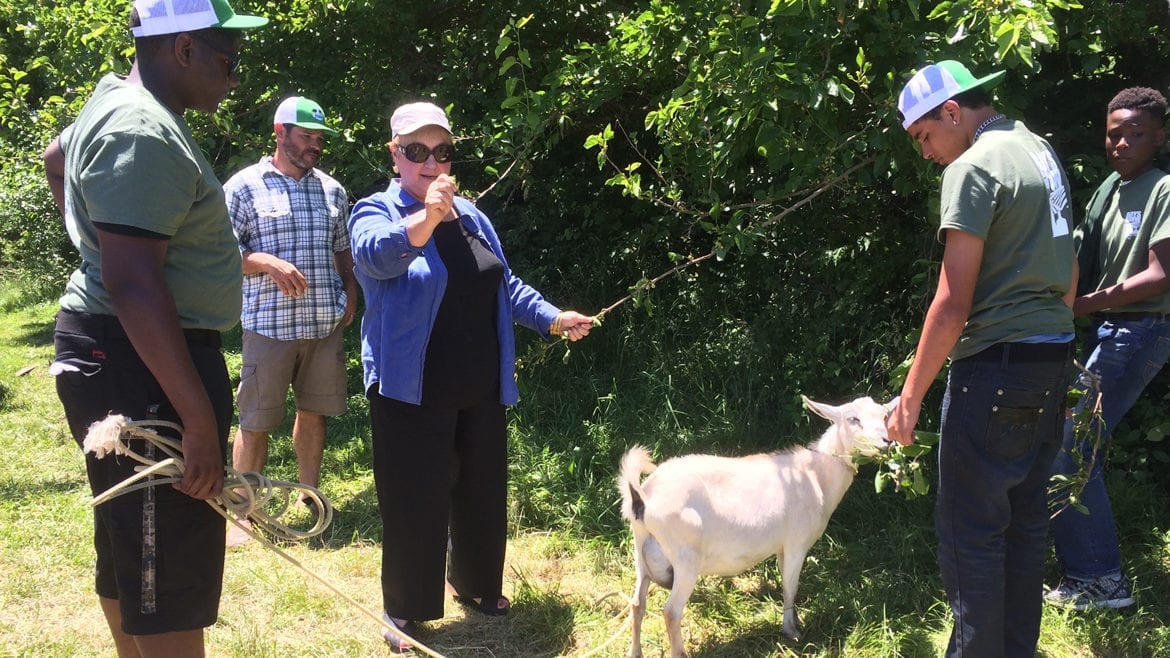 Goats bleat at the white fence as the car pulls up the gravel driveway at the Boys Grow farm. Chef Lidia Bastianich gets out and is met by John Gordon Jr., the executive director of the non-profit, who lives with his wife on a small house on the front of the property. A pair of dogs bound by and a half-dozen boys in green T-shirts are finishing off lunch plates of tacos – sweat beading on their foreheads beneath trucker hats. It’s Monday on the farm 30 minutes south of downtown Kansas City.

Boys Grow helps mentor and teach teenage boys farming and entrepreneurship skills over the course of a two-year apprenticeship program. Now in early June, the new class is on their third day of the apprenticeship, snipping kale and working the dirt on the 10-acre farm.

Bastianich is out for a farm visit and a chance to chat with Gordon and his charges. She meets a goat named Lidia (also featured in the video above), who has been named in honor of her support of Boys Grow. She visits with a few of the boys to talk about their interest in pursuing a career in the kitchen. Each year Boys Grow brings a new product to market – last year’s class made a Tzakzi Salad Dressing – in addition to the produce they sell to local restaurants.

For the past four years, has hosted a benefit dinner at Lidia’s Kansas City — her restaurant in the Crossroads — for the organization. Back in January, Flatland chatted with Bastianich about Boys Grow during Kansas City Restaurant Week [Boys Grow was on the charitable beneficiaries of KCRW]. She explained how the mission of the farm and the idea it could be the engine for change in these boy’s lives was a very powerful idea to her.

Gordon, in turn, believes that Bastianich has been an instrument for change on the farm. In addition to operational support, her advocacy has helped raise awareness of Boys Grow. The story above is about how a group of young men in Kansas City and a worldly chef share a connection to the earth.