From ‘combine karaoke’ to cursing: The sounds of harvest in the Midwest 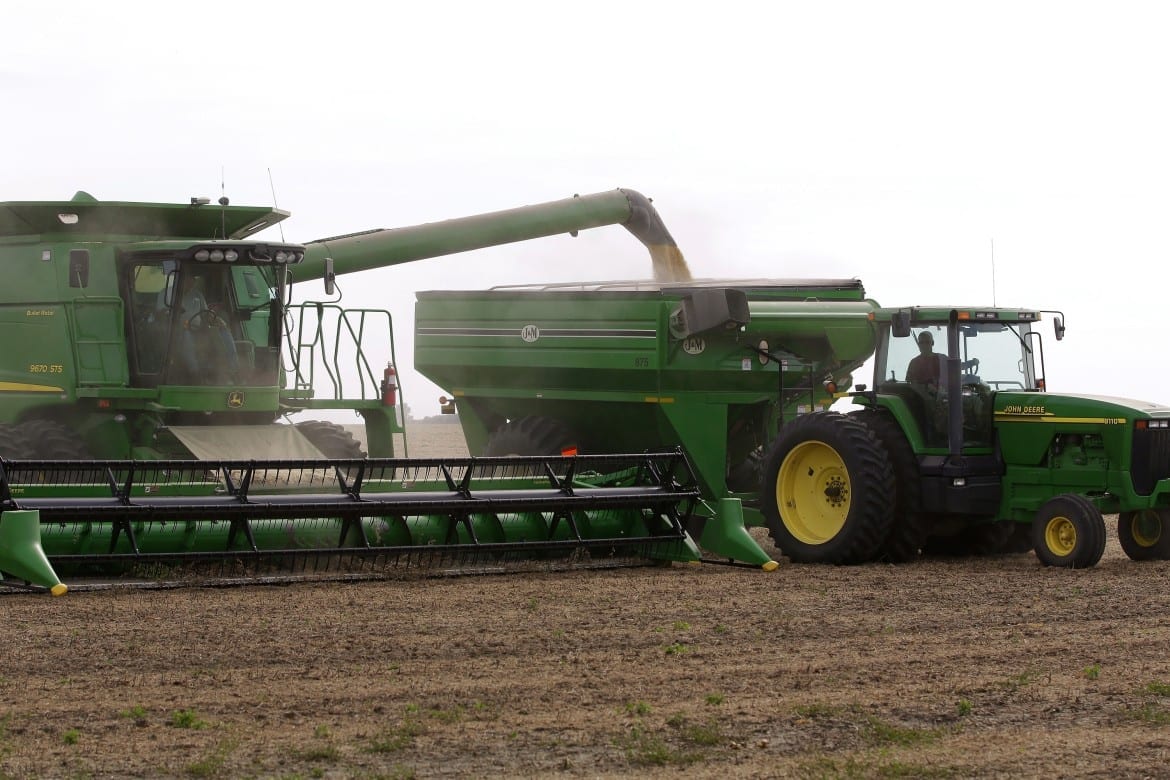 Fall is harvest season in many corners of the Midwest. U.S. farmers are expected to bring in millions of bushels of corn and soybeans in 2015. (Photo: Associated Press)
Share this story

Erik Terstriep, perched in the captain’s chair of his combine, glides through eight rows of corn at a time. When he lifts up the harvesting head to turn the machine around, it lets out a quick, staccato, “beep, beep, beep.” Terstriep is fluent in the language of this machine, able to decipher every chirp.

“You sit in here long enough, you know what’s going on instantly by the tone or by how many times it beeps,” he said.

Terstriep, in his early 30s, has been farming nearly that long with his dad and grandfather. Together, the family farms around 2,000 acres of corn and soybeans in Industry, Ill., and raises some cattle and hogs. During the fall harvest, he spends close to a month-and-a-half cooped up all day in the combine cab.

“It does get boring,” he acknowledged. “You have to find things to entertain yourself.”

Most of the time, the 35,500 pound machine quietly hums along. It’s equipped with GPS and autosteer which makes the ride so smooth, some farmers have allegedly fallen asleep. A lot of farmers make business calls behind the wheel or listen to sports radio. One man in central Illinois has gotten attention for writing poetry while harvesting.

Terstriep, who is decades younger than the average American farmer, stays alert with Snapchat, Angry Birds, Facebook, and something he calls “combine karaoke.”

“Eight o’clock at night, you’re looking for something to do to keep yourself awake,” he said. “Certain songs come on, you just can’t control it.”

He’ll sing anything, he said, from country to rap, but his favorite song to belt out is 52 Vincent Black Lightning, a classic bluegrass tune about a boy, a girl, and a motorcycle.

When something goes wrong in the field, Terstriep breaks his rhythm.

“It sounds like Chewbacca when you run something through you’re not supposed to,” he said. “It starts growling and grinding.”

When that happens, folks like Jay VanHolten, parts manager at Birkey’s, a Case IH dealership in Macomb, Ill., are the first to hear about it. This time of year, he said the phone rings off the hook with farmers looking to patch things up.

“If it turns or spins or rotates or shakes, it’s gonna break,” he said. “The perfect season, the ‘white whale of the harvest,’ I don’t think that exists.”

Sometimes, mechanics from the dealership get sent out to meet farmers in the field. Other times, VanHolten will wrap up the parts in a paper bag and leave them with a note outside the shop’s front door.

Bigger problems end up in the garage out back in the hands of Brian Ascher, the shop’s mechanic. Ascher, sprawled underneath a combine, has been updating the machine’s rotor all day. After working with farmers for 23 harvests in a row, he said the sound etched in his mind is cussing.

“Jesus Christ, what in the hell’s taking you so long? Why in the hell did this break? Who made it that way? That’s the kind of garbage you hear all the time,” he said with a laugh. “Grown men having fits.”

Back in the field, Terstriep said he remembers the angry tone of voice his dad would get sometimes while harvesting.

“There’d be times, as a child, I’d get hurt feelings,” he said. “But then you have to realize this is just a stressful time of year.”

This season’s been relatively mellow with only a few broken parts and grumbles along the way. It’s allowed Terstriep to tune in to his favorite sound: Golden kernels of corn flowing in a thick stream into his grain cart.

“It’s the sound of the culmination of the year,” Terstriep said. “It’s payday.”

“Sometimes you just sit here in the quiet and you almost zone out,” he said. “You just listen to the combine and you listen to the beeps and you don’t think about anything.”

Big Mood Swings Down on the Farm