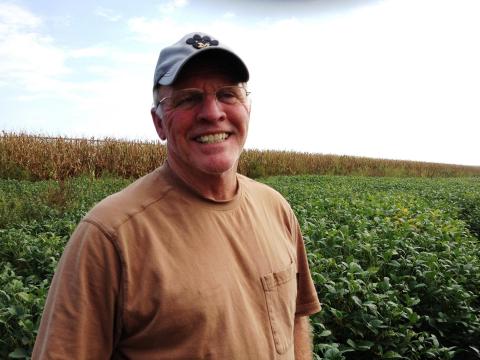 Fifth-generation farmer Richard Oswald stands in a field of soybeans that's worth a lot less than it would have been last year, partly thanks to a downturn in the economy of China. (Photo: Frank Morris | Harvest Public Media)
Share this story

China’s rapid industrialization and economic expansion over the past few decades has been a boon for U.S. farmers — especially soybean farmers. But China’s economy is slowing down, leaving American farmers exposed to the downside of being tied to the world’s second largest economy.

With tall stands of corn and green soybean fields stretching for miles, the river bottom land around Langdon, Mo., seems a long, long way from Beijing. In an economic sense, though, it’s practically right next door.

“I think about China all the time,” says farmer Richard Oswald, sitting on his front porch. “China’s the big player in the market.”

Oswald is talking about the market for the corn and, especially, the soybeans growing all around him. Six generations of his family have scratched a living from this land, but news of the economic slowdown in China scared him.

“I think about China all the time. China is the big player in the market.” — Richard Oswald, farmer

Chinese exports have helped Oswald’s farm prosper. You can see that in his shed, where a brand-new $300,000 combine sits ready to harvest the crops ripening in the fields.

For years, farmers like Oswald enjoyed high soybean prices at more than $12 per bushel. Now, they’ve fallen below $9 a bushel. And Chad Hart, an economist and crop markets specialist at Iowa State University, says it’s China.

“I’ve watched soybean prices drop almost $2 over the past couple of months, due to – China is slowing down and the devaluation of their currency,” Hart said.

The devalued Chinese yuan makes U.S. exports more expensive. There’s a lot of money at stake. American farmers are the world’s largest soybean exporters and China is by far the largest buyer. China buys other stuff from U.S. farmers too – wheat, corn, milo, cotton — but the value of soybean exports, about $14 billion last year, dwarfs all the others combined. If that market collapsed it would trigger a huge global decline in soy prices.

But Jay O’Neil, an economist with the International Grains Program at Kansas State University, says he doesn’t think soybean exports are all that threatened by the Chinese economic downturn.

“It scares me more regarding my 401(k) retirement program than it does about agricultural exports,” O’Neil said.

The bedrock reason for this is pretty simple: China doesn’t grow enough food to feed its ever growing population.

“Number one concern in China is food security,” O’Neil said. “So regardless of the strength or weakness of their currency, the Chinese government first and foremost will do everything possible to maintain food security.”

China does manipulate the market to protect its domestic producers, O’Neil says, obstructing U.S. corn and cotton exports. But O’Neil says that high-protein soybeans, which Chinese meat producers need to feed their livestock, are another matter.

“Things are always in a state of change when you are talking about China,” said O’Neil. “There are very, very few constants so far, other than the fact that they keep importing very good volumes of soybeans.”

It wasn’t always this way. Twenty years ago, U.S. farmers hardly sold any soybeans to China. Chinese consumers have since become a lot better off. They can afford pork and poultry, and those pigs and chickens they eat are fed soy meal, which has created the huge and lucrative market.

“We’ve gotten used to this trend of steady growth coming out of China,” said Chad Hart. “That’s going to start slowing down, that means demand slowing down as we look forward here.”

These swirling global economic forces will, eventually, trickle down close to home.

“As we become more integrated with other nations,” says farmer Richard Oswald, “we tie our fate to their fate.”

Which is why Corn Belt farmers are watching China so closely these days.