What if just one agency was in charge of food safety?

Harvest Public Media explores whether consumers would be safer 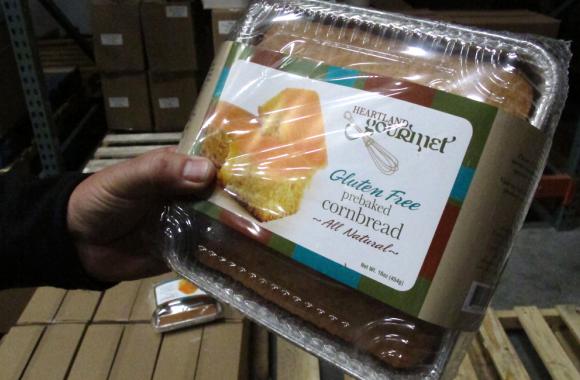 Heartland Gourmet in Lincoln, Neb., makes everything from organic cake mixes and cornbread, to pizza and burritos. Any time something with meat is being made, a USDA inspector has to be called ahead of time. (Photo: Grant Gerlock/Harvest Public Media)
Share this story

Walking through the warehouse of food processor Heartland Gourmet in Lincoln, Neb., shows how complicated the food safety system can be. Pallets are stacked with sacks of potato flour and the smell of fresh baked apple-cinnamon muffins is in the air.

Heartland Gourmet makes a wide range of foods from muffins and organic baking mixes to pizzas and burritos. That means business manager Mark Zink has to answer to both of the main U.S. food safety regulators, the Department of Agriculture and the Food and Drug Administration.

The product being made determines which agency is in charge. Apple cinnamon muffins fall under the authority of the FDA. A cheese burrito or cheese pizza is also FDA. But a beef burrito or pepperoni pizza has to meet USDA guidelines, rules formed by a totally different agency.

“[USDA has] jurisdiction over anything with raw meat, cooked meat, anything that touches meat product,” Zink said.

The general rule of thumb: Make something with meat and the USDA is in charge. Otherwise it’s FDA.

Seafood complicates the rules, though, as FDA has authority over seafood. But not catfish – catfish actually falls under USDA regulation.

The agencies work differently. Before Zink runs a batch of beef burritos, he has to call a USDA inspector so they can be on-site while the food is prepared. A USDA official will stop by at other times during the year to check in. He doesn’t hear from the FDA so often.

“FDA is a once a year thing,” Zink said. “They pop in and do their inspection and they’re gone.”

A patchwork of more than a dozen federal agencies play a part in keeping food from making Americans sick. Critics say the system has holes, and some think we would all be safer if food safety at the federal level was brought under one roof.

Altogether, 15 federal agencies play a role in food safety, from the EPA to the Centers for Disease Control. Food processors are subject to a dizzying array of regulations, spending time and money to prove their products are safe.

Each year 1 in 6 Americans comes down with listeria, E.coli, salmonella or some other foodborne illness. According to the CDC, 3,000 people die each year. For years, critics have said a streamlined system would be safer. Even President Obama called for the creation of a single food safety agency in his 2016 budget.

Fragmented From The Start

Heartland Gourmet’s Mark Zink says after 25 years in the business he has no trouble navigating the system. But there’s no denying it’s complex.

“And it ends up just being a gigantic mess in terms of a comprehensive approach to food safety,” said Courtney Thomas, who studies political science and food safety at Virginia Tech University.

Thomas says the system looks fractured today because it was cobbled together from the start. The first food safety laws passed in 1906 put USDA in charge of meat quality because the agency already worked with meatpackers. The FDA was created to ensure purity in other foods.

“Right out of the gate there were two different laws, two different legislative mandates that were given to two completely different agencies in the federal government,” Thomas said. “And from there it only spiraled.”

The U.S. Government Accountability Office has been a leading critic of the fragmented food safety system, for years labeling it a high-risk area in need of reform. The GAO’s Steve Morris says the food safety system is one recall away from a crisis.

One longstanding issue is that the various agencies tend to keep a narrow focus and work on small slices of oversight.

“Right now what you have is fairly limited coordination,” Morris said. “So the consumer and the Congress basically lack this comprehensive picture of what the national strategy is.”

That’s a big problem because there are challenges ahead that cut across all agencies. For instance, 16 percent of the food Americans eat is imported and that number is rising. Steve Taylor, a food scientist at the University of Nebraska Lincoln, says regulators are already behind in inspecting foreign food facilities.

“And if you got to the right people in a lot of big corporations in the United States involved in food processing, they’d say that’s one of their biggest worries too,” Taylor said.

One agency could be more efficient checking-in on foreign suppliers.

Politics Of The Plate

The U.S. food system is currently one of the safest in the world, and some say federal time and money is better spent elsewhere. Most food companies would prefer a complicated but familiar system over an unknown overhaul. And with multiple agencies involved, more politicians have oversight of food safety, which they might not want to give that up.

“There’s no easy fix to this problem,” Thomas said. “What you’re talking about is a legal, a regulatory, and a cultural shift. A political shift that we haven’t seen in this country in the last 100 years.”

Without an immediate crisis, it seems there’s not much political appetite for shaking up the food safety system.