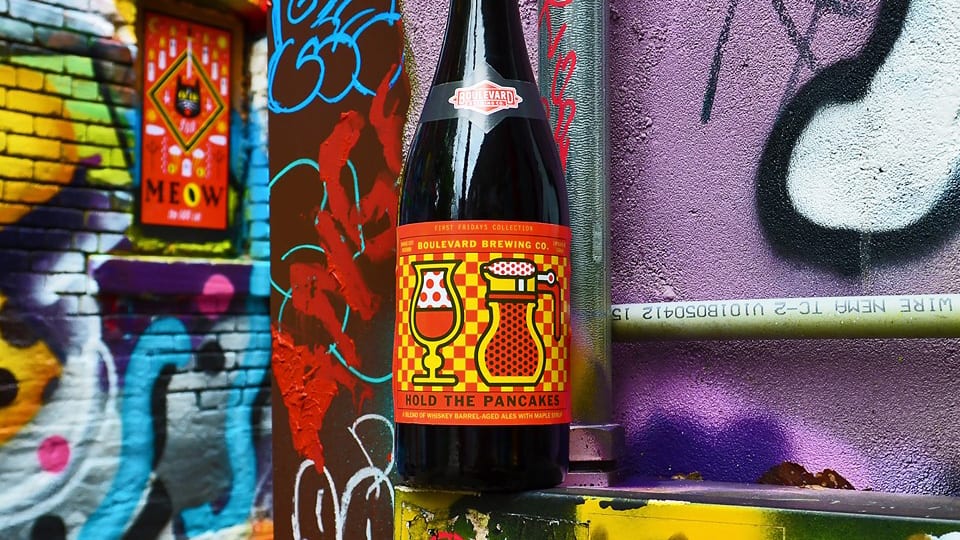 Boulevard Brewing Co. has a new take on pancakes. Hold the Pancakes is a barrel-aged beer that is meant to evoke the joys of breakfast. (Contributed | Boulevard)
Share this story

We’re in the midst of American Craft Beer Week, but unlike many marketing holidays, this comes with some very intriguing possibilities. You can drink not one but two pancake-inspired beers, attend a pizza pop-up by a brewery in a barbecue joint, or head out on a pub crawl with your pup.

A number of local breweries will be playing around with limited releases and adding funky ingredients to beers that are part of the regular lineup. I’ve created the start of the list for you, but this is the week you should immerse yourself in Beer Twitter to catch the rare kegs and weird kegs and kegs that taste like pancakes.

Double Shift Brewing Co. is pulling out all the kegs, looking to drop eight beers in six days. Friday night is the one to circle on your calendar. Stout Night! will feature three beers: a baklava, honey-infused stout with cinnamon, vanilla and walnuts, Pancake Mafia Stout (made with blackberry, maple and vanilla) and Aggressively Sarcastic Stout (flavored with cardamom, coffee and orange blossom water). Keep an eye out for Strawberry Field Trip (7.1% ABV), a sour with lime, mint and strawberry, which drops on Thursday.

Strange Days Brewing Co. has a pair of new beers out this Friday. Mango Habanero Gose is back and Counter Ruck is a “rugby-inspired” American ale — a piece of proceeds goes to the KC Jazz, a local women’s rugby team.

Big Rip Brewing Co. celebrates its sixth anniversary with the Get Ripped Beer Fest on Saturday, June 1, from noon to 4 p.m. The outdoor fest at the North Kansas City, Missouri, brewery features more than a dozen local breweries, as well as distilleries and Hawg Jaw BBQ. A $30 ticket includes a glass and beer samples.

Happy Hour just got a bit bigger. Boulevard Tours & Rec is holding a barrel-aged happy hour featuring its sour beers from 6 to 7 p.m. Tickets ($25) come with a taste of five drinks, including a test wild cider with raspberries and an amphora-aged vignoles sour ale.

Breakfast comes in many forms and, in this case, it’s a pint glass. Tapcade is holding a Hold the Pancakes! release party from 5 to 9 p.m. The beer bar/arcade will be serving Boulevard’s blended beer that’s been aged in whiskey barrels with maple syrup and a few breakfast options (think pancakes and bacon) for dinner.

Martin City Brewing Co. is taking its act on the road with pizza night at Plowboys Barbeque (1111 Main St.) from 6 to 8 p.m. Get a pie and Hard Way IPA, Radical Candor IPA or Rescue Mild Ale.

Cuddle with a kitten for a good cause. Cinder Block Brewery is hosting a Kitten Shower — a $5 donation or item from a list from KC Pet Project gets you entry — from 6 to 8 p.m. You can also raise funds by drinking Cinder Block brews as $1 from each beer sold will go to KCPP.

BKS Artisan Ales has instituted summer hours, which means you can get the nanobrewery’s beers three days a week. BKS is open from 4 to 9 p.m. Friday, 1 to 9 p.m. Saturday and 1 to 7 p.m. Sunday. The brewery is in the midst of an expansion project, which will increase its brewing capacity and seating.

Cinder Block is holding a Firkin Off for American Craft Beer Week from noon to 11 p.m. The North Kansas City brewery will be serving up three different firkins (small casks): a coconut lime Paver’s Porter, a Prime Ale with agave, apricot, mango and pineapple (Prime-wiian Punch) and Weathered Wit with Grand Marnier and cherries (Party in The USA).

Grinders Stonewall (10240 Pflumm Road, Lenexa, Kansas) and Cinder Block are holding Movie Night. They’ll be screening, “Old School,” and the flick starts at dusk on the lawn outside Grinders Stonewall.

The KC Nanobrew Festival, a celebration of homebrewers, is from 2 to 6 p.m. The festival, now in its tenth year, features more than 300 kinds of homebrew. Tickets are $40.

Get a bit of sunshine and check out the new patio at Velo Garage and Tap House. The North Kansas City beer bar and bike shop is hosting a soft opening for its beer garden from 7 to 10 p.m. with coffee from Blip Coffee Roasters and food from the Dead Beet Taco Shop.

Boulevard Tours & Rec is trying something new with The Society for Fancy Eating and Drinking. Krokstrom chef Katee McLean will be cooking Scandinavian cuisine paired with Boulevard beer and talking about her culinary influences. The night starts at 6:30 p.m. and tickets are $50.

The Tour De Bier, a benefit for BikeWalkKC, starts between 8 and 9:30 a.m. depending on whether you take a 15, 35 or 50-mile bike route that starts and ends at Knuckleheads Saloon. As part of the historical bike tour of local beer lore, you’ll get to stop by four to six breweries and then get lunch from a collection of food trucks (Jerusalem Cafe, Urban Cafe, among them). Registration is $50.

Rather travel with four legs than two wheels? The Beer Paws Pub Crawl, which is celebrating the sixth anniversary of the dog treat company, is from 1 to 5 p.m. Humans and pup companions can travel between 10 spots in the Crossroads. Pick up your “pawsport,” at 18th and Grand. General admission is $20 and VIP admission (swag bag and rides on the Barley Bus between stops) is $35.