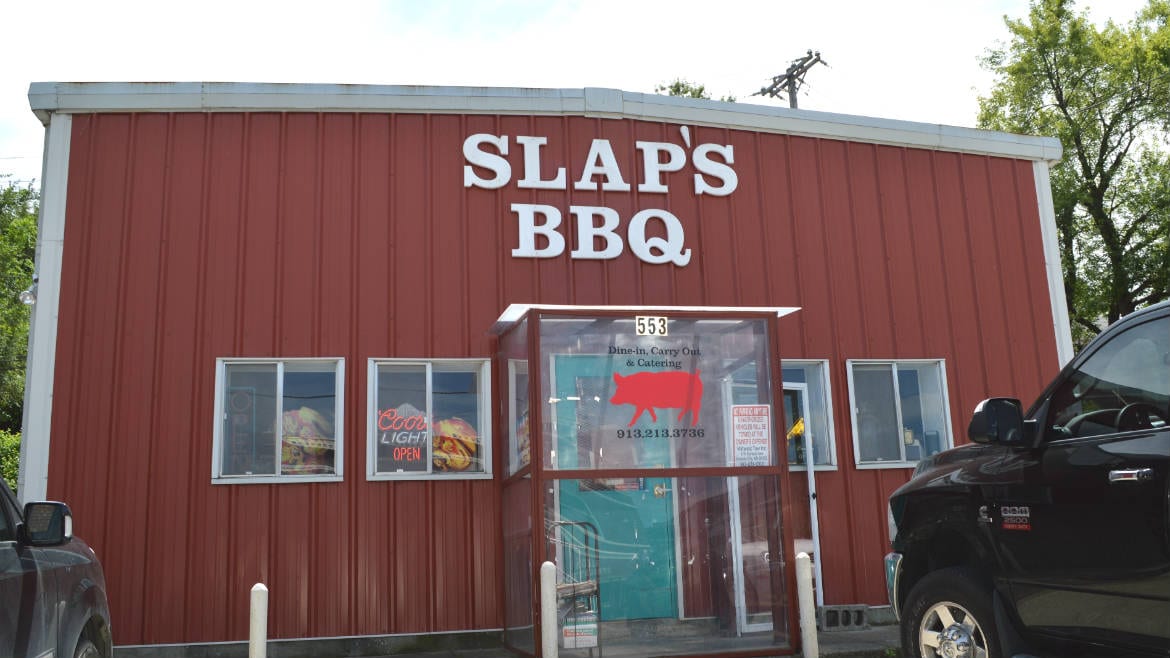 A few cars trickle into the Slap’s BBQ parking lot at 535 Central Avenue as the clock hits 2 p.m. on a Thursday in summer. Three men walk through the door, pausing briefly to read the sign on butcher paper taped to the front, which informs them that the line forms to the right.

But the line, which often stretches out into the parking lot (and sometimes on to Central Avenue), has come and gone along with the 110 pounds of burnt ends prepared daily by the year-old, lunch-only barbecue joint in Kansas City, Kansas.

The men hunker down with plates of brisket, cheesy corn and fries. They are glad to have snared a half-rack of ribs, which are usually sold out by this time. The word is out in KCK that you have to show up early if you want your pick of the menu at Slap’s.

Pitmaster Joe Pearce, 29, comes out of the kitchen, loosening the straps on a black apron and carrying a pair of celebratory milkshakes. He hands one to his older brother Mike, his partner in the restaurant, and sits down almost 12 hours after he fired up the pair of hulking black smokers built by their uncle Bruce Shoemaker that are always waiting to be fed with wood, smoke and meat.

“Barbecue is this crazy phenomenon. It’s a food that people take so religiously that they’ll drive miles and days to come try our barbecue,” Joe Pearce says. “We’re humbled by this insanely devoted community.”

It all started with a 14-foot U-Haul crammed full of barbecue equipment in March 2012. The Pearce brothers had heard that their barbecue was good from friends and family. They wanted to see if strangers thought the same thing. So they entered the NKC Missouri State BBQ Championship in their hometown of North Kansas City.

They came prepared and left encouraged. Squeal Like a Pig BBQ finished in the middle of the pack, just high enough to think they could taste victory. Two contests later, they took first in pork and fifth overall at the Brew, Blues & Bar-B-Q Cook-Off at the Lansing DAZE Festival in Lansing, Kansas.

They competed 10 times that first summer and 15 more the following year (they’ll compete in their 16th contest of 2015 this weekend). [Brandon Whipple, an original partner on the team and restaurant, was bought out in 2014.]. Joe Pearce’s backyard began to fill with discarded smokers, equipment the Pearce brothers had stripped down and re-engineered in an effort to build a better firebox. They took classes, learned to judge barbecue and started to develop their own rub and sauce.

“Competition barbecue requires repetition. It’s about feel and knowing when something is right and wrong that makes all the difference,” Joe Pearce says. “You can’t be too spicy or sweet. But you’ve got to have a sweet rib in Kansas City or you won’t do well. The sweeter the rib, probably the better you’re doing.”

When they began to find success on the barbecue circuit, people began asking about catering. And then the producers of BBQ Pitmasters came calling. The brothers headed to Tampa, Florida, on a mission to win. Joe Pearce had spent almost eight hours a day researching different proteins, smoking techniques and even how animal’s diets affected meat texture and flavor.

“It was a deep dive,” Mike Pearce says. “But without Joe’s preparation, we never would have done as well as we did.”

SLAP’s BBQ made it to the finale.

“I did get this hat,” Joe Pearce says of losing out on the $50,000 grand prize, his fingers touching the brim of a sauce-stained BBQ Pitmasters ball-cap. “And a ton of free publicity.”

They leased the Central Avenue space that last held Millie’s Café in February 2014 and were open by June, a few days after their appearance on the reality barbecue show aired.

“We’re not trying to do things that are easy, just simple,” Mike Pearce says. “We cook with our hearts and just try and make it as delicious as possible.”

When they opened they would cook 10 brisket points (the section used to make burnt ends) a day and 15 slabs of ribs. Those would sell out in as little as two hours. They still sell out regularly, even though they’re cooking 30 racks of ribs, and as many as 50 on Fridays. There was a little of Franklin Barbecue – the Austin, Texas, restaurant with an infamous line and famous habit of selling out – in their business model, but there was also just a limit to what Pearce could cook in a given day.

“When you eat a slice of brisket cooked today versus yesterday, you’ll notice a difference,” Joe Pearce says. “I think Kansas Citians have gotten a little tolerant.”

The demands of running a restaurant and competing also forced Pearce to adapt his smoking style.

“A lot of cooks go low and slow,” Pearce says. “But we go hot and fast. That was born out of necessity. In those first few weeks we had three employees and I was here 20 hours a day. I had to redefine the process of how to cook barbecue.”

Each day, Pearce ran his smoker a little hotter – slowly easing the temperature up from 275 to 350 degrees. Today, he’ll cook a brisket on a mix of hickory and Missouri oak in three-and-a-half hours in roughly a quarter of the time of what it takes to cook a brisket “low and slow.”

“There’s a lot less risk with cooking hot,” Mike Pearce says. “The longer the meat is on the fire, the more chance there is of burning or drying out or combustion issues.”

Slap’s BBQ is a part of a time-honored tradition in Kansas City – competition barbecue teams deciding to open a restaurant (Q39 and Plowboys BBQ are like-minded additions to the barbecue landscape). The main difference in the eyes of the Pearce family is that they’ve continued to compete even while running their restaurant.

“We’re cooking every week, putting our food on the line,” Joe Pearce says.

Cooking daily at the restaurant has aided Pearce on the competition circuit – Squeal Like a Pig currently sits 54th in the Kansas City Barbeque Society standings. And his tinkering on the competition circuit is what led to the restaurant’s sauce which customers have compared to everything from Teriyaki to the classic brown sugar-tomato based sauces that dominate Kansas City barbecue.

“It’s a mix of our competition sauce and Kansas City style sauce,” Joe Pearce says. “It’s my take on Kansas City barbecue. There’s vinegar and tomato and it starts sweet and finishes with a little bit of pop from red pepper flakes.”

Slap’s BBQ is talking with their landlord about a larger space or the adjacent building. They just added a Southern Pride smoker that would allow them to increase the volume of barbecue they can cook. They’re also going to be building out a patio as they intend to start looking at being open for dinner and maybe on weekends by the end of August.

“We feel like we’ve made a traditional Kansas City barbecue restaurant here,” Mike Pearce says. “It’s not just the flavor profile, it’s what Joe and I experienced growing up. We want people to get that same feeling. It’s not a greasy dive, but it is small and quaint. It’s me and Joe and our food. Everything is permeated with the smell of wood and barbecue. This is as Kansas City barbecue as it gets. It’s what we were born and bred with.”