A Priest, A Chef and a Hunger to Feed Kansas City 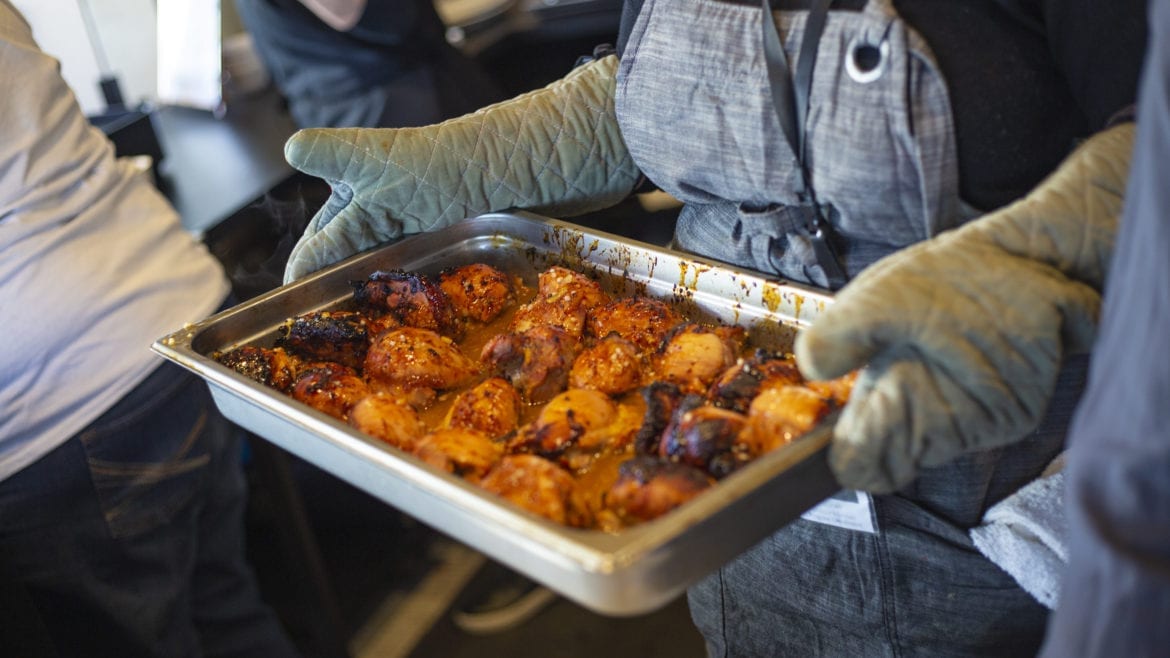 The first man I serve has sunburned skin and is wearing a ripped T-shirt.

I’m not sure how to reply. The man scratches at his side before pointing to baked chicken and roasted potatoes. I fill his plate, carry it to the register and tell him I hope he enjoys lunch.

The next three people in line are from the social services nonprofit Operation Breakthrough looking for a quick lunch. The fifth is a mayoral candidate who congratulates me for volunteering at Thelma’s Kitchen at 31st Street and Troost Avenue in midtown Kansas City.

It’s the third day for the unique pay-what-you-can cafe that Reconciliation Services, a charity providing area residents with rent, energy and government identification assistance, opened last July. It’s the third day of an ambitious plan to build community, one grilled-cheese sandwich and bowl of tomato soup at a time.

The idea was hatched by a priest with a social justice bent and a chef from a town of 6,000 people. On this day, the two of them are still fidgeting with how things look and figuring out how much food to make. I am helping serve lunch. 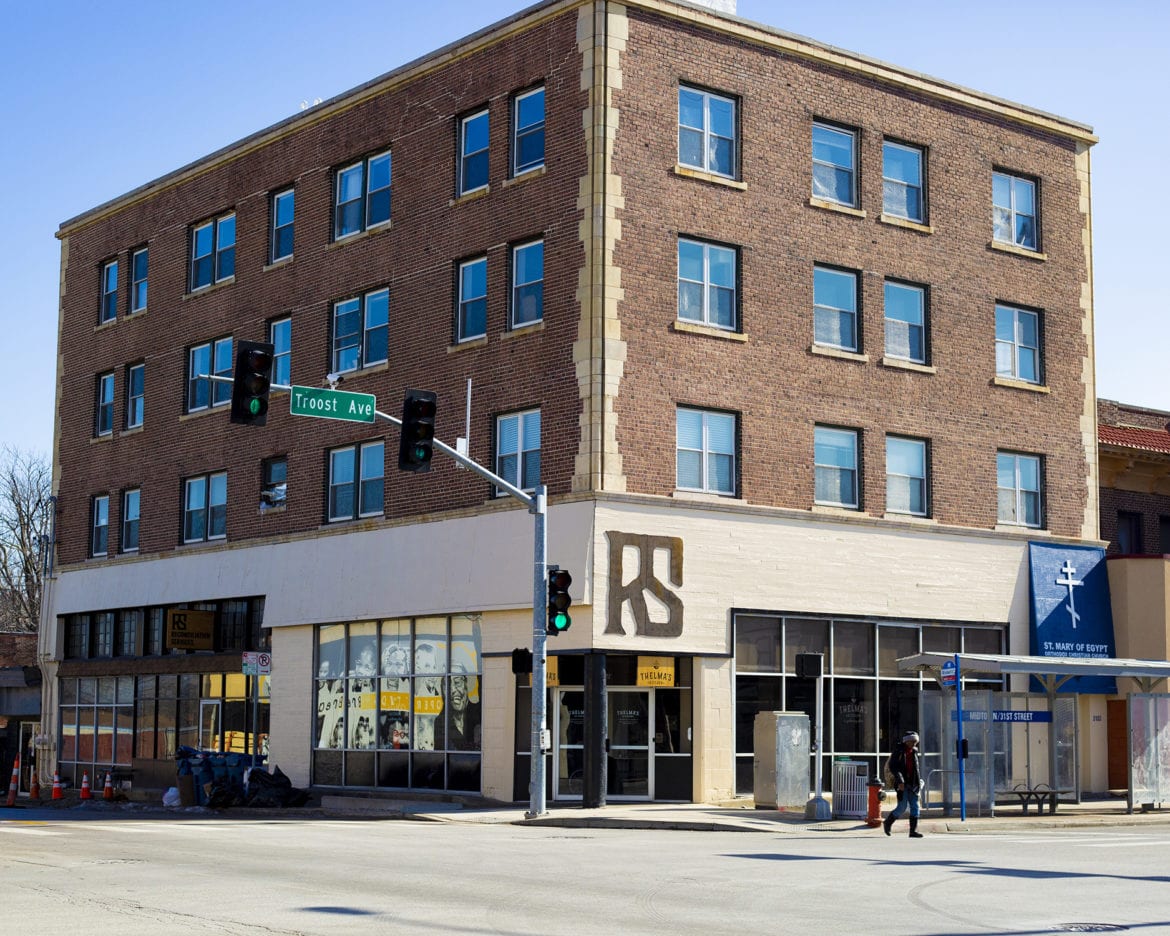 Thelma’s Kitchen is one of 60 restaurants operating nationwide under One World Everybody Eats, a charity that shows community organizations how to open eateries with a pay-what-you-can model. Diners have the option of paying the suggested price, paying more or less, or donating some of their time in exchange for a meal.

The cafe is named for Thelma Altschul, who founded Reconciliation Ministries with her husband David three decades ago. The two were fixtures on Troost Avenue, providing food and assistance to the neighbors that they saw struggling. Before the cafe, there was literally Thelma’s apartment kitchen.

Their ministry became a part of the Eastern Orthodox Church and in 2005, they launched Reconciliation Services. The informal meals served by Thelma became a standing Friday night dinner.

Thelma’s Kitchen is a gamble for Reconciliation Services, but one that Father Justin Mathews — the current executive director — felt he had to take. He watched as volunteers came in for the Friday night dinners and then went back to their homes in other neighborhoods. He worried that while the meal was providing a service, it wasn’t ultimately serving Reconciliation Services’ mission of making connections between people.

“We had to strike a balance,” Mathews said. “This didn’t need to feel like a new place. It had to be for our former clients and guests and new folks moving into the neighborhood.” 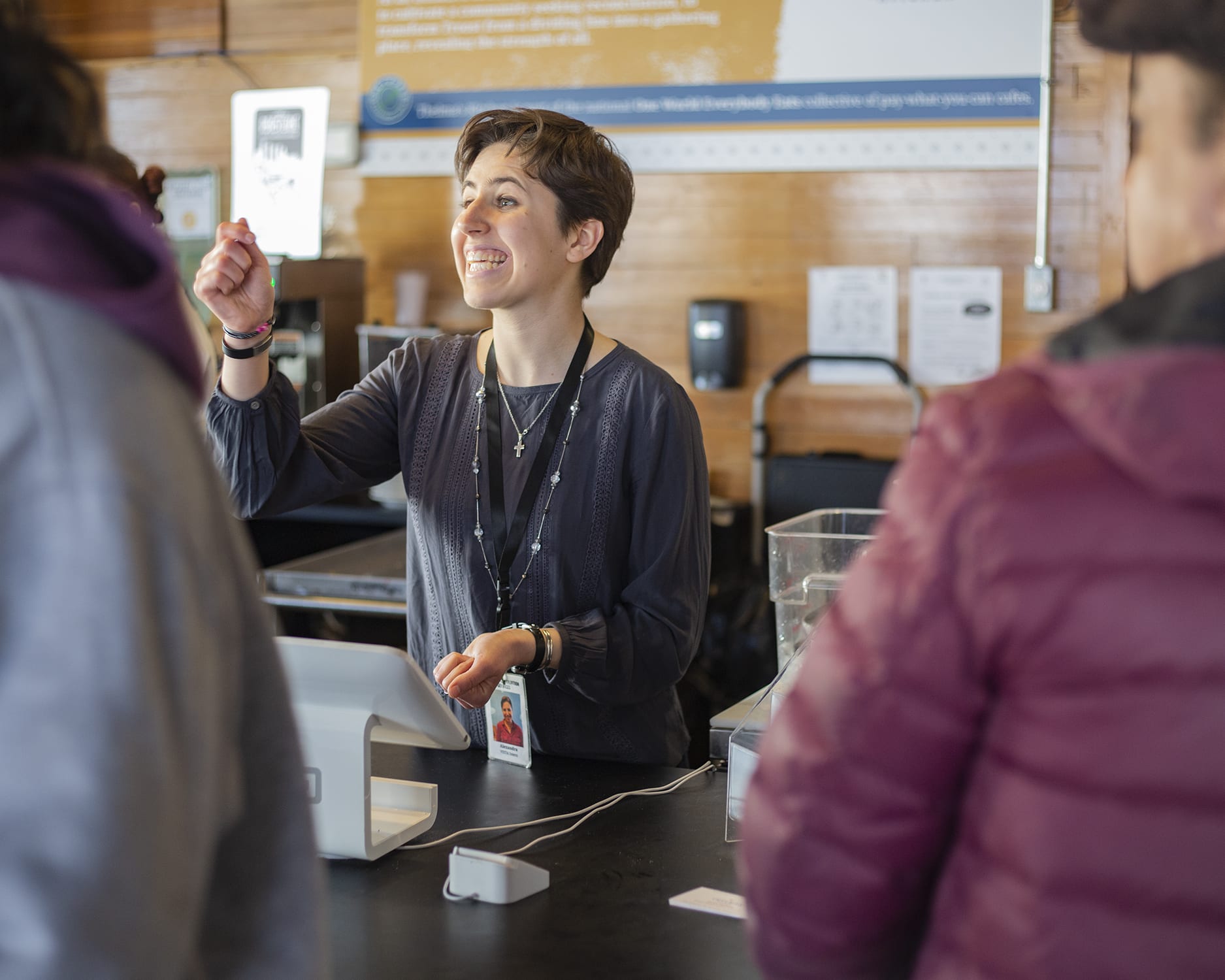 An hour into lunch, chef Pam Infranca runs back to the kitchen to dice and roast more vegetables. The side to her herb chicken has proved popular. The chicken salad sandwich, a regular menu item that she used to offer at a cafe she once owned in Trenton, Missouri, has already sold out.

Infranca moves with purpose. She was a ballet dancer until a car accident ended that dream at 26 years old. She found a new sense of herself in a kitchen, running a 44-seat diner for more than a decade in northern Missouri.

“I’ve never been afraid to change,” she said. “I’m always trying to learn and be willing to plug away.”

This job was a homecoming for Infranca. Her grandfather had run Frank’s Market at the northeast corner of 25th and Troost for years. She remembers riding to the corner grocer in her grandmother’s gold Cadillac. She’d sit behind the counter on Saturdays, where her grandmother would slip her damaged coins.

“I just remember walking in to [Reconciliation Services] and thinking, ‘these are my people.’” Infranca said.

She brings out the tray of roasted vegetables, taking a quick look if there are enough potatoes and cucumber salad behind the U-shaped counter. Infranca changes the menu daily. There are always a pair of soups, a vegan and gluten-free option, as well as a sandwich or hot entree and a pair of dessert choices. 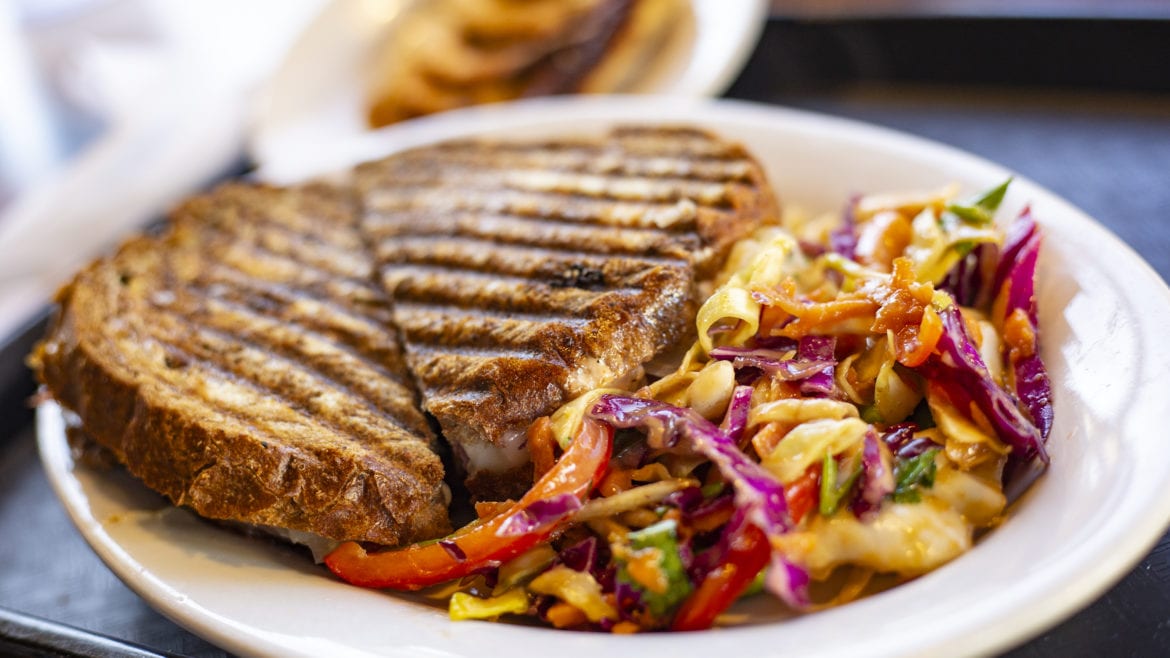 My supervisor for the day is program coordinator Sarah Tepikian. She smiles before she speaks and has a way of nodding her head when people speak that makes them feel heard.

Tepikian describes the everyday needs at Thelma’s, from sweeping to washing dishes to cleaning tables.

The dining room, dotted with simple white tables and one long communal table made of black walnut (built from a tree in Mathews’ yard a few blocks away) is packed.

A man who has been in each of the first three days jokes with Infranca. He asks her when she’s going to bring back the meatloaf that made him take a nap. A woman in pearls dines at the table next to a man who paid with a fistful of change.

She doesn’t talk to the man, but they share the same space for lunch.

“You can’t be what you can’t see, Mathews said. “When you walk into Thelma’s Kitchen, everyone can see themselves being there.” 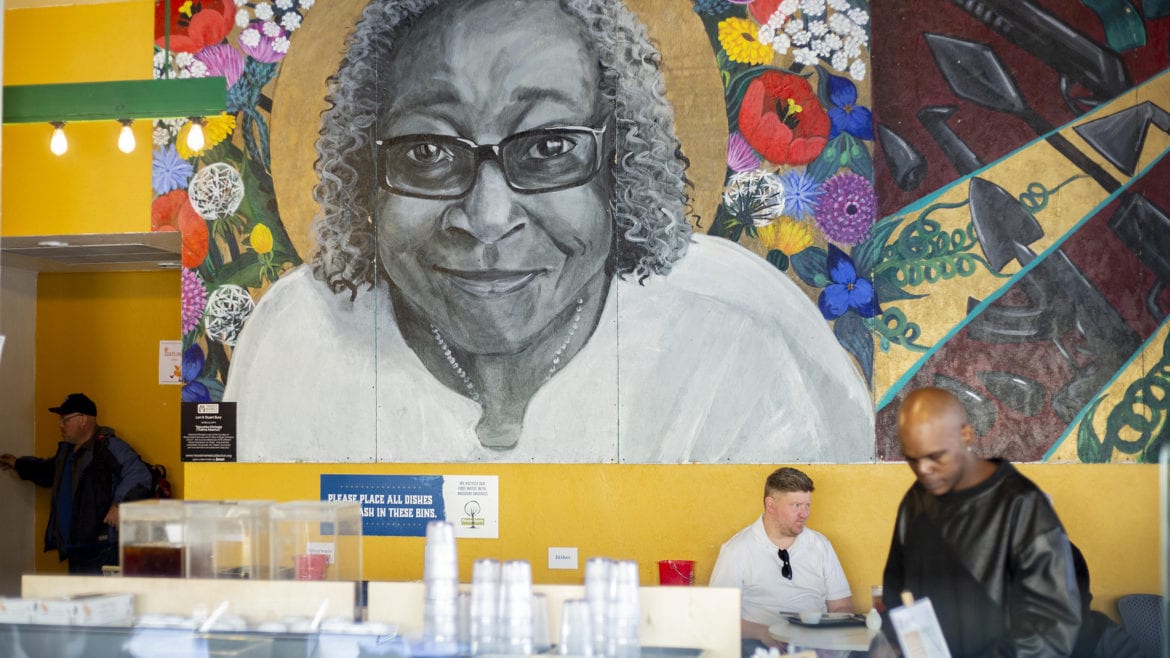 In the six months since I volunteered, a new pedestrian walkway has gone up over Troost Avenue, connecting a pair of Operation Breakthrough buildings. A block away, Blip Roasters just opened in The Wonder Flats and Shops. As development has come to Troost, so too have complicated questions. While Mathews isn’t against retail development, he worries about the human cost of economic development.

“We are not improving Troost if we just improve the buildings and push people somewhere else,” Mathews said.

Often the conversations we have about Troost Avenue feel stuck in the past. It’s harder to talk about the present.

The present is a man with his sick child dining next to a postal worker, and the woman who is hoping to bring the Troost Market Collective, an arts incubator, alive. All of them, in turn, sitting underneath a mural of Thelma, who passed away in 2012.

“It would have been easy to sell this building and find a new location. But we had to stay here,” Mathews said.

Near the end of the lunch rush, Tepikian, my mentor for the day, catches my attention. She points to a couple at the front door. She helped translate the menu into Spanish for them yesterday. Today, they’ve opened the door for an elderly woman and helped her find a seat.

“That’s what it’s all about,” Tepikian says, as she carries a dish back to the kitchen to get more food for the next group of people to walk through the door at Thelma’s.

For the next release in it’s Brewhouse One Series, Boulevard Brewing Co. has tapped Thelma’s Kitchen as the beneficiary. Thelma’s will receive $1 for each bottle of Good L’Oven — a beer made with coconut and toasted pecans in homage to a coconut pecan pie — that Boulevard sells. The limited release bottles will be available at the Tours & Rec Center Gift Shop (2534 Madison Ave.) at 10 a.m. on Sunday, Feb. 10. The beer will also be on tap in the Tours & Rec Center.