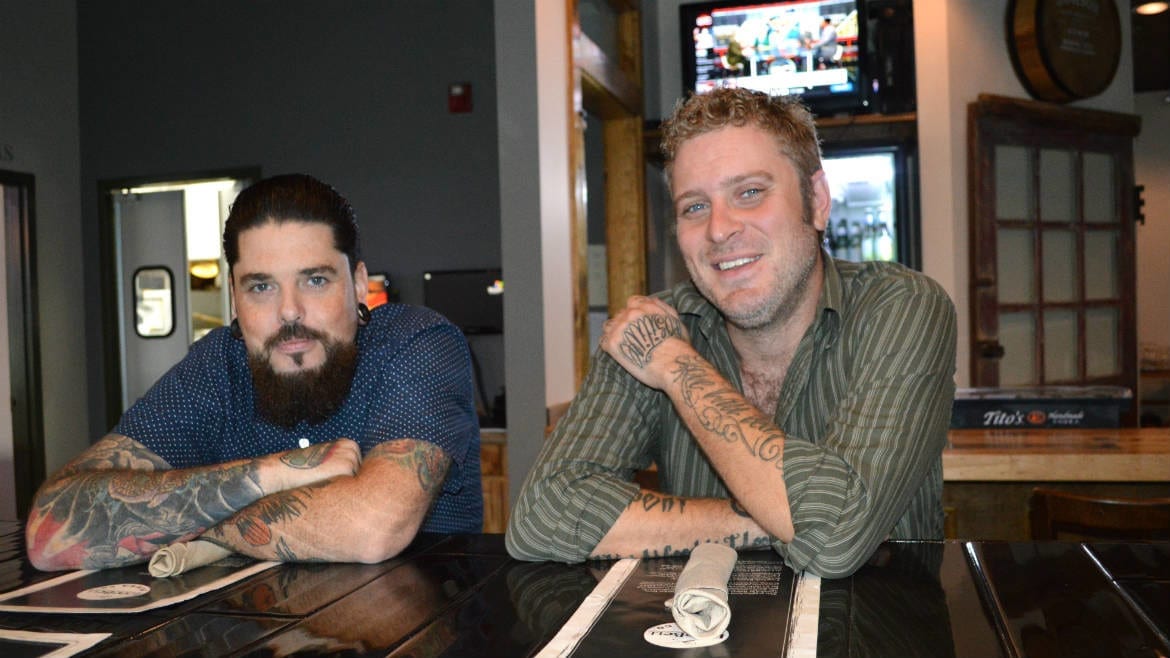 Owners Jayson Eggers, left, and Aaron Mulder opened Long-Bell Pizza Co. in the former Next Door Pizza space in Lee's Summit. “This business is competitive," Eggers said. "We just complement each other in such good ways.” (Photo: Jonathan Bender | Flatland)
Share this story

Aaron Mulder invented the pizza test even if he hasn’t yet named it. Mulder, or another member of the staff at the three-week-old Long-Bell Pizza Company, will place a hand under each pizza to see if it holds its shape without the support of the plate. If the slice doesn’t get floppy, that pie is ready to hit the dining room at 3385 SW Fascination Drive in Lee’s Summit, Missouri.

“The pizza needs to be crispy on the bottom and foldable,” said Long-Bell co-owner Mulder. “We don’t call it New York-style. We call it Kansas City-style because nobody has done that yet.”

This story of two guys and a pizza shop (the former Next Door Pizza space) actually begins with a burger joint. Chef Jayson Eggers, 35, had moved from Sacramento, California, in 2010 to begin working at Blanc Burgers + Bottles.

Long-Bell Pizza Co. recently opened in Lee’s Summit, and owes its name in part to the history of the wood on its sign. (Photo: Jonathan Bender | Flatland)

Blanc — the burger and beer bar concept, which currently has a single location in Leawood, Kansas, — was in the midst of a huge expansion. Mulder was hired on to work in Leawood and the two chefs forged a friendship through their easy working relationship.

“This business is competitive and a lot of times you work with other chefs and they’re always trying to one up you,” said Eggers. “We just complement each other in such good ways.”

“We’re pushing each other to be better. It’s all about what gets put on the table in front of the customer,” added Mulder.

A little over two years ago, Eggers left Blanc and began working for MarSprings Hospitality Group – the local group that operates Coal Vines on the Plaza and the Westport Ale House. And when he needed help at the Ale House, the first chef he turned to was the 34-year-old Mulder. On the line and in casual conversation, the two thought about what it would be like to go into business together.

“Everybody goes to culinary school because you want to own a restaurant or be on TV,” said Mulder. “If you say it’s not one of those two, you’re lying through your teeth.”

Mulder and Eggers began writing a business plan 18 months ago. While they were considering whether to open a catering company or an eatery, Mulder moved out to Lee’s Summit, Missouri, with his wife. After a night cooking at the Westport Ale House, he often stopped by Next Door Pizza.

“It became my nightly watering hole. I got to know the staff and the great beer list,” said Mulder.

On one of those nights, Next Door Pizza owner Patrick Cuezze asked if Mulder had a minute to chat. Cuezze told him that he’d been considering selling the shop and thought Mulder could do a lot with the space.

Mulder agreed and Eggers saw the potential of establishing a neighborhood spot a short drive from the future home of the new Cerner campus. The two managed Next Door Pizza for a month while they worked to close the sale, getting to know the staff and regular customers.

“We know we’re breaking some ground in Lee’s Summit,” said Mulder. “There’s not many locally owned restaurants in Lee’s Summit that are doing scratch cooking.”

As Mulder explains, you need “great bread and sauce,” for pizza. And for him that begins with pizza crust made with high-gluten flour, olive oil, salt, sugar and yeast.

“Pizza is comfort food. I wanted a nice crispy outside to the crust that when you bite into it, you get that warm bread inside,” said Mulder.

The sauce has a bit of sugar, a mix of pureed tomatoes, and crushed tomatoes and fresh herbs.

“It’s got a savory. It’s not too spicy or rich or over the top. The sauce is just so good,” said Eggers.

The menu was intentionally small to start – wings, salads, sandwiches and a slate of 11 pizzas ranging from the Barnyard (house-cured pork belly, bell peppers, onion and an over-easy egg) to a spicy mango.

“That pizza came out from a disagreement. I like Hawaiian pizza,” said Mulder.

So one of their few disagreements turned into one of Long-Bell’s early customer favorites. The spicy mango has capicola, prosciutto, mango and a Diablo sauce with the same spicy-sweet profile of mango salsa.

“It’s our version of a Hawaiian because I couldn’t have a Hawaiian,” said Mulder.

Pizza has also proved to be a litmus test of sorts. The crew at Long-Bell can tell when customers are beginning to expand their culinary horizons based on their orders.

“We know people are starting to step outside their boundaries when they start doing half-and-half, when I see a half-pepperoni, half-spicy mango,” said Eggers.

They’re going to reprint the menu with a toppings list so folks know they can build their own pie. Eggers, who runs the kitchen while Mulder manages the front of the house, is looking at adding a new sandwich or pizza, and toying around with the idea of a daily pasta. Both chefs are looking to get back in the kitchen to start offering beer dinners.

“We were lucky to keep the same relationship with vendors that Next Door had, so even though we’ve only been open a few weeks we can get really rare stuff,” said Mulder of Long-Bell’s 15 beer taps.

Long-Bell was named for the lumber company run by Robert Long, the lumber baron and philanthropist, who lived in Corinthian Hall (the site of the Kansas City Museum), helped to finance and create Liberty Memorial, and built Longview Farm nearly a century ago. Long-Bell Pizza Co.’s sign is made out of Cyprus wood that once was fencing at Longview Farm.

“The food scene has exploded with so many locally-owned concepts,” said Mulder. “We loved the idea of connecting Kansas City and Lee’s Summit and we thought this was a perfect way to do this.”