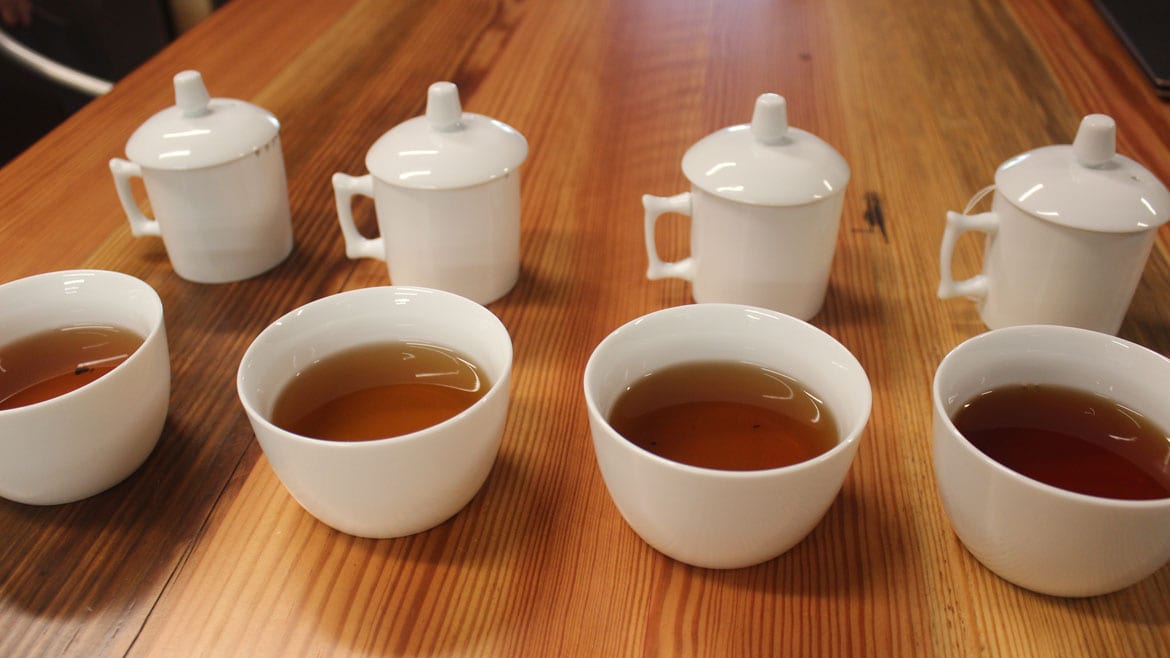 The Midwest Tea Fest is a chance to explore the world of tea this weekend. (Bridgit Bowden I Flatland)
Share this story

There are four cups sitting in front of Tyler Beckett, in a small warehouse just north of the river in Kansas City. Beckett uses a spoon to sip the first sample.

“It’s got that nice beautiful smokiness to it.” he says about his first taste. He takes a sip of the second sample. It’s more “sparkly.”

Contrary to what you might be thinking, Beckett isn’t sipping scotch or wine. He’s actually sipping tea. Today he’s sampling four Yunnan black teas — and they all look, taste and smell differently.

Beckett is the founder of Hugo Tea Company, a Kansas City company that sells craft teas. He started the company in 2011 when he was finishing his MBA at the University of Missouri. Now the company sells eight craft hot teas, and sells its teas in about 90 regional coffee shops, restaurants and grocery stores, according to the company’s website.

“I like tea and I felt like it was underserved,” Beckett said. “I was frustrated with the second-class status of tea as it compares to coffee or booze.”

His goal is to make tea into a beverage of habit, like coffee is for many Americans. But, he said tea is often seen as just a “health beverage,” reserved for yogis and monks.

“Tea was inaccessible, it wasn’t very cool, it was very niche,” he said.

That’s why Beckett decided to take inspiration from the makers of a different beverage: beer.

“People don’t drink beer for their health, they drink it because they identify with the brand and because they want to enjoy themselves,” he said.

What would a beer company do?

Beckett aims to brand and market tea like craft breweries do with beer.

“You just don’t get New Belgium beer, you get a Fat Tire,” he said. “The beer in and of itself has a sub-brand.”

He wanted to create a recognizable brand of Hugo tea for each category of tea that people already ask for by name. So, instead of “Earl Grey,” Hugo sells “Grey Line,” and instead of “English breakfast,” it sells “Full Steam.” 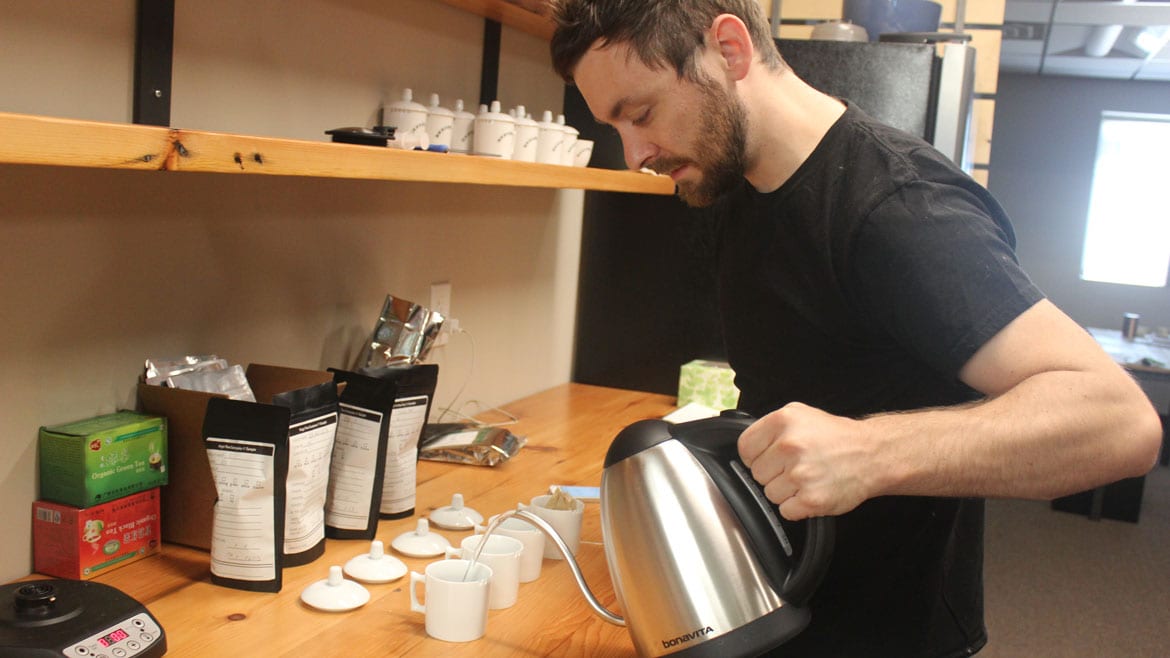 The business is relatively low-cost to run because the tea is bought and packaged in small batches. So although inventory costs are low, one of the largest expenses is travel. The company has recently become self-sustaining, Beckett said.

Hugo’s tea is all organic because of Beckett’s strong belief that pesticides sprayed on tea leaves ultimately end up in your cup. Beckett travels to China about once each year to visit farms and inspect the tea and land.

The tea is hand-packed into tins with Hugo’s hot air balloon logo. Beckett said the logo and name “Hugo” portray adventure and approachability. But the company isn’t named after anyone. In fact, Beckett doesn’t know a single person named Hugo … he just likes the name.

“Why do you name your kid anything?,” he asked. “Because you like it. Because it’s a cool name. Why should companies be held to a higher standard?”

Similarly, Beckett said there wasn’t a “golden cup” of tea that inspired him to go into the tea business. He said he doesn’t think passion happens like that.

“It’s the difference between a romantic fling and a longer, friendship-based relationship,” he said.

As far as turning America into a tea-drinking culture, Beckett said there’s still a long way to go. Many people don’t know the difference between real tea (made with tea leaves) and herbal teas, which can be made from a huge variety of plants steeped in hot water. And often, people aren’t making the tea like they should.

“Americans tend not to brew their tea correctly,” he said. The most common mistakes are steeping tea for too long and burning tea leaves (especially green tea).

“But hey, at least they’re drinking tea,” he says and drains the last drop from his cup.