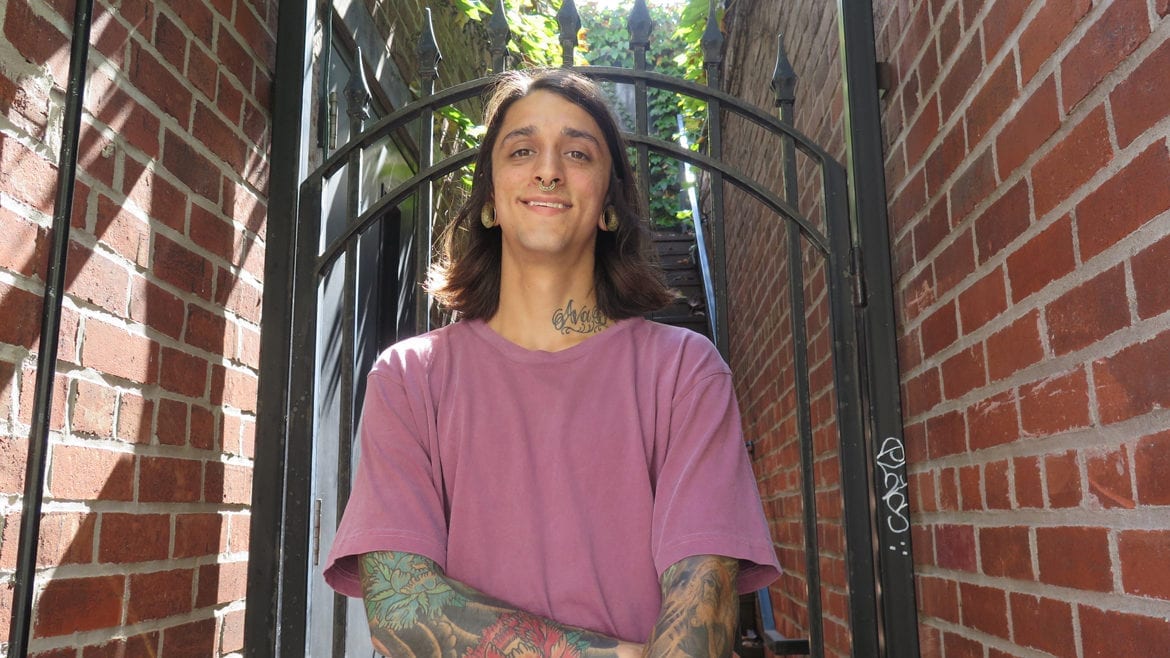 Aep Chef Jakob Polaco hopes to open on 39th Street by the end of the year (Photo: Pete Dulin I Flatland).
Share this story

A Kansas City chef driven to discover the secrets of street food in Thailand is about to bring that knowledge home. Chef Jakob Polaco plans to apply his globe-trotting cooking experience to Aep (pronounced “ape”) — a Thai street food-style restaurant slated to open December 1 in the former Thomas restaurant space (1815 W. 39th Street).

Before the Thomas space emerged as a possibility, Polaco intended to open a small take-out shop for Thai street food in Midtown.

“When I started looking for space, my leasing agent knew something might be coming up on W. 39th Street,” said Polaco. “When the space became available, it was perfect. I revised my business plan and concept for a more composed style of Thai street food.”

While Polaco has been a fixture on the staff of several Kansas City’s restaurant kitchens, Aep marks a major step as the owner-chef of his first restaurant. His career began nearly a decade ago. To develop his culinary skills and knowledge, Polaco went to Oregon Culinary Institute in Portland in 2008.

Afterward, he returned to his hometown of Joplin, Missouri, more than 8,600 miles away from Thailand. Polaco knew the family that owned Kinnaree, a casual Thai eatery in Joplin. He began working as a dishwasher and progressed to prep cook. Sometimes entire shifts involved slicing up 40 pounds of chicken.

Seeking more culinary experience, Polaco moved from Joplin to Kansas City four years ago. He worked the fish station at The American Restaurant briefly under chefs Debbie Gold and Josh Eans. Polaco also helped launch the Cuban food truck Plantain District before spending a year in the kitchen at Port Fonda, and 18 months at The Rieger. But he never lost his taste for learning about and preparing Thai dishes.

In January 2016, Polaco traveled to Vietnam and Isan, Thailand, a large northeastern region with 20 provinces. He took cooking classes and learned to prepare dishes from street vendors. He also did a two-weeks stage at Baa Ga Din, a fine-dining restaurant serving modern Thai street food in Bangkok, Thailand.

Understanding the differences between regional food styles in Thailand is vital for proper food preparation. Not all regions prepare curries the same way, for example, or serve universally spicy dishes. Balanced flavor is a key component of Thai cuisine.

At Aep, Polaco plans to prepare and serve Isan-style street food and specific regional Thai dishes in a rustic, authentic style. As he explained, “Isan’s food is different from Chiang Mai.”

Chiang Mai, a mountainous northern region popular with tourists, shares a border to the west with Burma. Its food is mild and shares similarities to Chinese dishes compared to the more rich, spicy, and creamy curry dishes in Bangkok and Central Thailand. Alternately, the food and culture of Isan, an agricultural farming region, is influenced by neighboring Laos.

Polaco points out that Isan cuisine has more larb (or laab) dishes, a type of salad with finely-minced meat, chili, and fresh herbs served with lettuce leaves in Thailand and Laos.

He plans to serve an Isan-style catfish larb. “Isan has no coast. It’s like the Midwest where catfish is common,” said Polaco.

Naem is a firm, Chinese-style dry pork sausage found in Isan cooking. It is lactic-fermented and slightly sour compared to the more herbaceous, spicy sausage found in northern Thailand. It’s like comparing the mild tang of summer sausage eaten “as is” to a juicy cooked Italian sausage.

Another dish, mu kraab, features ultra-crispy thick pork belly where the skin “is crispy and hard like shellac” atop the meat.

The restaurant’s name Aep also refers to a cooking method of slow-grilling food wrapped in a banana leaf. He will also serve dishes in this fashion.

“It’s like a surprise inside to unwrap the package. It transports you as an experience,” said Polaco.

He plans to use charcoal grills, a common cooking technique in Thailand, to prepare dishes. Also, look for familiar items found on Thai menus such as sticky rice, grilled chicken, and papaya salad.

While traveling in Thailand, Polaco was transfixed by the grandmothers and mothers that woke up early, tended to charcoal grills, and made rice porridge (jook) and traditional breakfast foods. Polaco plans to offer a Thai-style brunch that includes similar foods and kanom beuang, a dish he learn from a street vendor.

“A taco-shaped shell is made from mung bean flour, water, and lime paste, which acts like baking soda,” said Polaco. “You fill the shell with savory or sweet ingredients like candied egg threads, sausage, and cilantro.”

Polaco obtains the keys to the space in mid-October. Then he will renovate the floor and interior and update the kitchen with charcoal grills and other equipment. He plans to open the 50-seat dining room and bar in December. Adding another 50 seats in capacity, the private dining room and rooftop deck and bar will debut in spring.